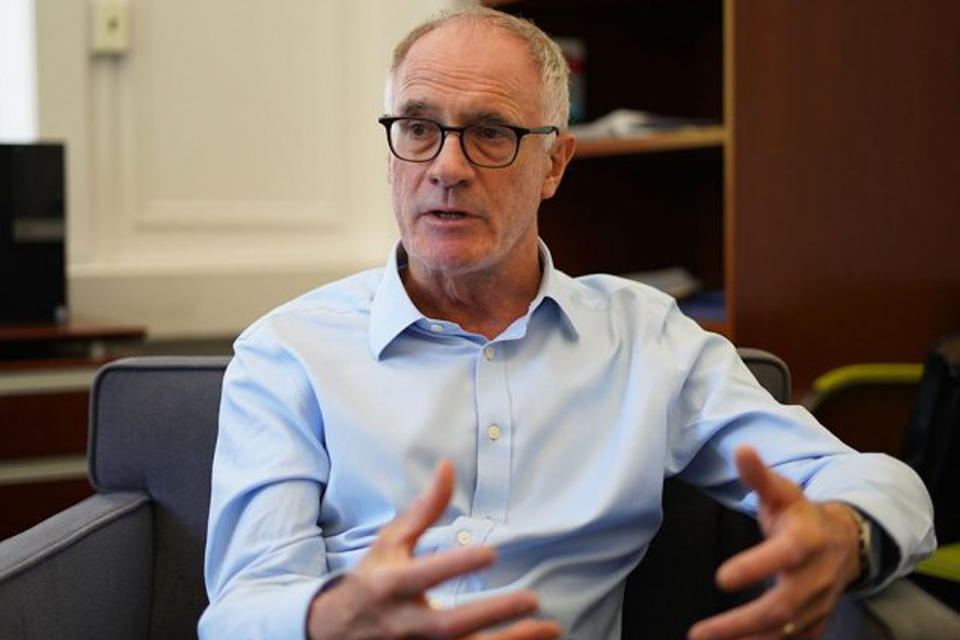 In December 2017, University President Lee Bollinger announced Halliday as the new director, filling a vital role in the Earth Institute, which had been without permanent leadership for more than a year and a half.

In his first year at Columbia, Sir Alex Halliday, director of the Earth Institute, has focused his efforts on leveraging the multidisciplinary nature of the institute to better combat climate change, increase student involvement in institute initiatives, and push for greater internal progress regarding sustainability on Columbia’s campus.

In December 2017, University President Lee Bollinger announced Halliday as the new director, filling a vital role in the Earth Institute, which had been without permanent leadership for more than a year and a half. Halliday, already established as a famed geochemist at Oxford, officially began his role in April 2018. He was knighted this year for his contributions to scientific research.

The Earth Institute has been a leader in global science since its inception more than two decades ago in 1995. It brings together faculty from the Law School, School of International and Public Affairs, and Graduate School of Architecture, Planning and Preservation to work alongside traditional scientists—an interdisciplinary aspect Halliday said he admired when he first joined. The International Research Institute for Climate and Society, an organization within the Earth Institute, has also been involved in the University’s inaugural project under Columbia World Projects, an initiative Bollinger introduced in April 2017 with the goal of having researchers solve real-world problems.

According to Halliday, his main focus in leading the Earth Institute is to combat climate change within the University and beyond. In an interview with Spectator, Halliday noted that the institute needs to take advantage of its academic strength and interdisciplinary nature in order to be a global leader in sustainability. He cited ACToday, the first CWP, which aims to help better anticipate and understand climate patterns and address food shortage crises, as evidence of Columbia’s potential to be at the forefront of the field.

“This is the best place in the world for interdisciplinary work. ... The challenges we face are huge, and the job of the Earth Institute and my job is to do research so that we can one day face those challenges,” Halliday said. “There are many opportunities to do that with Columbia uniquely through collaboration.”

Halliday hailed the ACToday as a successful use of Columbia’s interdisciplinary and outward reaching potential for real-world change.

“This large project is a spectacular example of what Columbia can do that other universities can’t—taking our knowledge and our understanding and our science and applying it to real world problems and needs,” Halliday said. “We are taking the power of the university, which is an interdisciplinary organization, and taking that to collaborate with other countries.”

Since April 2017, the University has been pursuing the goals of an ongoing sustainability plan, which will set the groundwork for a second sustainability plan set to be released in 2020. The current sustainability plan’s goals focus largely on the Morningside campus, which houses a number of old buildings that still rely on outdated heating and cooling systems.

“Columbia faces a massive set of problems. ... The heating infrastructure and cooling infrastructure here is terrible and ancient,” Halliday said. “[It] is going to cost a huge amount of money and a lot to sort out the whole of the University with so many old buildings located in a place like Manhattan.”

A number of members within the Earth Institute also sit on Columbia’s sustainability board. Citing the University’s own sustainability plans, however, which focus largely on reduced emissions and data collection across campuses, Halliday said that Columbia also needs to harness its research and efforts to address its internal efforts toward sustainability. Despite new infrastructure such as that at the Manhattanville campus, Halliday said that old infrastructure and heating systems serve as the greatest obstacle to Columbia’s own efforts.

Despite having many goals that focus on data, Halliday expressed concern in the University’s progress gathering the information needed to begin proper sustainable redevelopment.

“The biggest issues of tackling heating in buildings and dorms is a long-term crunch working through building after building, coming up with a thorough study of what it would cost,” Halliday said. “This hasn’t been done in a comprehensive way at this stage, and it needs to happen.”

Some students have also cited doubts about the standards that the University set for its role in global sustainability. Last year, the Columbia College Student Council passed a referendum urging the University to commit to carbon neutrality, a goal not established by the current sustainability plan, by 2030. In November 2018, the Earth Institute faculty passed a resolution in support of the same student-led campaign.

Halliday noted the ambition of the student body regarding these initiatives and said that he hopes the Earth Institute can foster greater collaboration with students in the future.

“At the moment the space and facilities aren’t great for this, but one of the goals I’ve got is to get students more involved in terms of ideas, seminars,” Halliday said. “We are keen to talk to students in the future about how they would like to see this happen.”