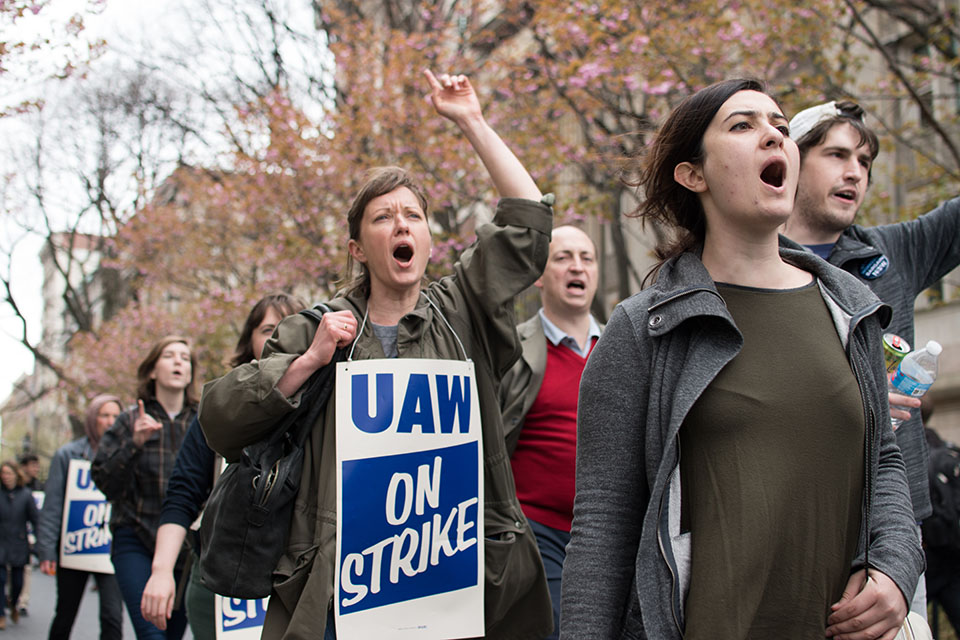 With bargaining talks set to begin in February, members of the graduate student union plan to redouble their negotiation efforts on attaining grievance procedures. Up to this point, the University has indicated a greater willingness to make monetary concessions.

Last November, the graduate student and postdoctoral student unions approved a bargaining framework—which outlines 10 guiding conditions for bargaining—set by the University. Official negotiations between Columbia and the two unions is mandated by the framework to begin on February 2019, nearly three years after graduate student organizers earned the legal right to unionize in a historic 2016 court case.

The graduate student union’s priorities are divided between monetary and non-monetary goals, and include increased compensation, improved childcare, and delineated grievance procedures, according to a statement published online. Despite Columbia’s initial refusal to directly bargain with graduate students, the Provost’s office has released a number of updates over the past few years addressing some of these concerns independent of a bargaining contract.

In 2016, Columbia posted two statements detailing new parental leave benefits, childcare subsidies, coverage of ISSO fees, and a $15 minimum wage for student workers, among other changes. In the email sent out on July 15, 2016, Provost John Coatsworth announced that the annual stipend given to Ph.D. students would increase by at least 3.75 percent and that these stipends would continue to increase by over 3 percent for the next three years.

The University declined to comment on its specific approach to addressing the union’s goals outside of finalizing a contract.

Though the University has addressed the grievances of the graduate student union in numerous ways over the years, union members said that they have only seen progress in areas related to monetary goals, while questions of grievance procedures and other non-monetary goals, including protections from unjust discipline or dismissal, have remained largely unaddressed. In light of this discrepancy, graduate students have cited grievance filing procedures as a more immediate objective in bargaining moving forward.

“It seemed like what they were willing to do were the financial things—the small, targeted budget issues that, if they paid us more, we would stop trying to unionize… What we haven’t heard much of anything about are things like a grievance procedure... All we have seen is who is getting more money,” said Rosalie Ray, a Ph.D candidate in Urban Planning and Bargaining Committee member.

According to Noah Rauschkolb, a third year Ph.D student in the sustainable engineering lab, the enhancements failed to address the union’s priorities, which lie in addressing broader policy-related issues to improve working conditions.

“We don’t have any power to resolve these problems. We can’t hold any of these people above us accountable. That’s why you see these old men who have been harassing their students for decades,” Jared Sacks, a third year Ph.D candidate in MESAAS, said.

“There have been some really substantive benefits along the lines of what we’ve been pushing. In terms of where there’s still a gap ... the biggest thing is that there’s no grievance procedure. …There’s really no protection,” Rauschkolb said.

In light of the changes that have occurred, Noura Farra, a sixth year Ph.D student in Computer Science, said that these benefits have demonstrated the University’s marginal willingness to compromise, but also emphasized that having grievance procedures and seeing changes in non-monetary areas—which largely address protections from policy violation and enforce reasonable work practices—will be essential for ensuring fair practices going forward in bargaining and in the workplace.

“It’s cool that the University at that time rolled out these enhancements in response to these unionization efforts, but that’s not enough for us. We want to have a say in determining what conditions we have in order to bargain as an equal with the administration,” Noura said.

Rauschkolb added that these changes would improve the working conditions and culture at the University on a larger scale.

“We’re hoping that this will be a step towards ultimately a more democratic University that will benefit not just us but also post-docs, students who have had the same Kafka-esque experience that we’ve all had here,” Rauschkolb said.

The bargaining framework currently includes a clause that states any grievance or arbitration process must defer to Columbia’s right, as an educational institution, to control academic matters.

According to Trevor Hull, a bargaining committee member, graduate students will not sign a contract without better protections.

“We are not going to sign a contract that doesn’t have third party arbitration and a grievance procedure,” Hull said. “That is non-negotiable for us.”

Correction: A previous version of this article misspelled the name of Noura Farra. Spectator regrets this error.