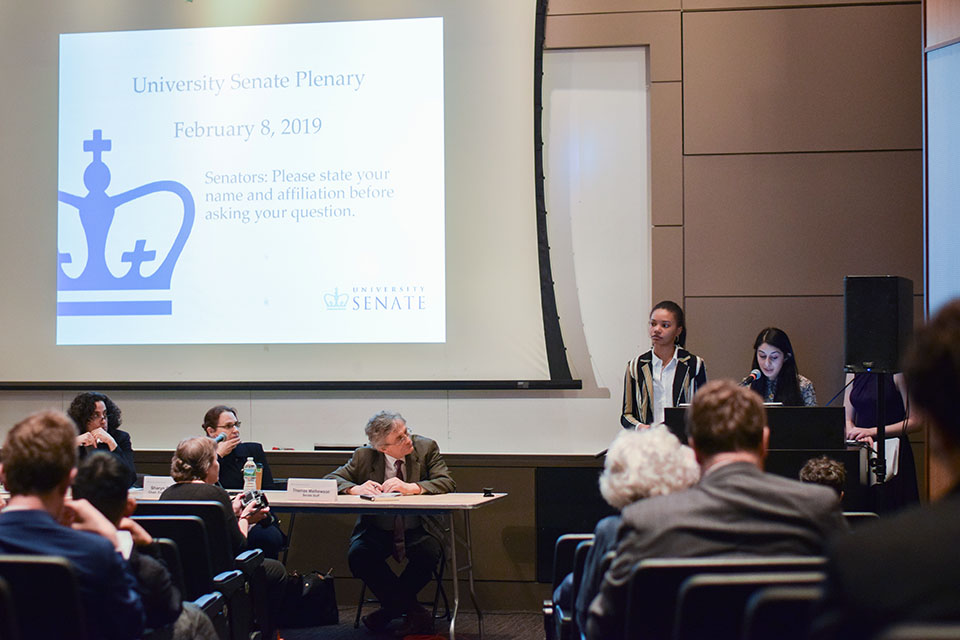 In the coming months, the pilot program will dispense free tampons and pads in a total of 17 high traffic men’s, women’s, and gender-inclusive restrooms.

The University Senate announced a new program to provide feminine hygiene products in various bathrooms across the Morningside Campus, including locations like Lerner Hall and Northwest Corner restrooms, at its monthly plenary Friday afternoon.

In the coming months, the pilot program will dispense free tampons and pads in a total of 17 high-traffic men’s, women’s, and gender-inclusive restrooms, and continue expanding through the actual implementation. Dating back to spring 2016, undergraduate student councils have made a significant push to provide free hygiene products, and though pilot programs were briefly initiated by Columbia Health and the Engineering Student Council, neither were continued. The proposal also follows a New York City law, passed June 2018, that mandates access to free feminine hygiene products in all public schools, as well as Brown University’s establishment of a similar program.

Currently, free pads and tampons are only provided in the Columbia Health office on the third floor of John Jay hall.

“These are a basic necessity for anyone who menstruates which is a often a heavily stigmatized issue in communities around the world and in the local community as well. …Our project promoted access to address both financial and logistical concerns,” Senator Zoha Qamar, SEAS ’19 and the leader of the initiative, said.

The proposal for the current program cites usage data from a week-long pilot program funded by the Engineering Student Council in fall 2017, where student government volunteers from Columbia College, Columbia Engineering, and the School of General Studies re-stocked dispensary stations in six high-traffic bathrooms. It also draws upon data from the nine-week pilot run through Columbia Health in spring 2016, where a total of 137 students picked up tampons or pads. At the end of the pilot, however, Vice President for Campus Services Scott Wright said that the programs did not generate enough interest to be continued.

Qamar attributed the success of the new proposal to University-wide support offered by faculty and students throughout the Senate. According to calculations by data collected through the pilot program, the total budget required to stock the 17 locations will be $14,766.90, to be funded centrally, not including cost of labor or dispensers. Moving forward, the program may expand to include more bathrooms on different campuses after further evaluation.

Executive Vice President for University Life Suzanne Goldberg commended the initiative organizers for their contribution to the campus community.

“I just want to underscore something that you said that in addition to being logistical and something people face day to day this is a very contribution to the campus climate,” Goldberg said.

In spite of this step forward, Qamar also noted that the need for such an extensive push demonstrates a gap in available resources for women.

“In some ways this successful policy project feels revolutionary and exciting. In other ways it’s really a bit heartbreaking that bringing to light ending connotations around basic staples for lives around the world feels like a success when it’s truly just a necessary step towards equity,” Qamar said.

A full list of the initial 17 bathrooms to be stocked with tampons and pads is below: