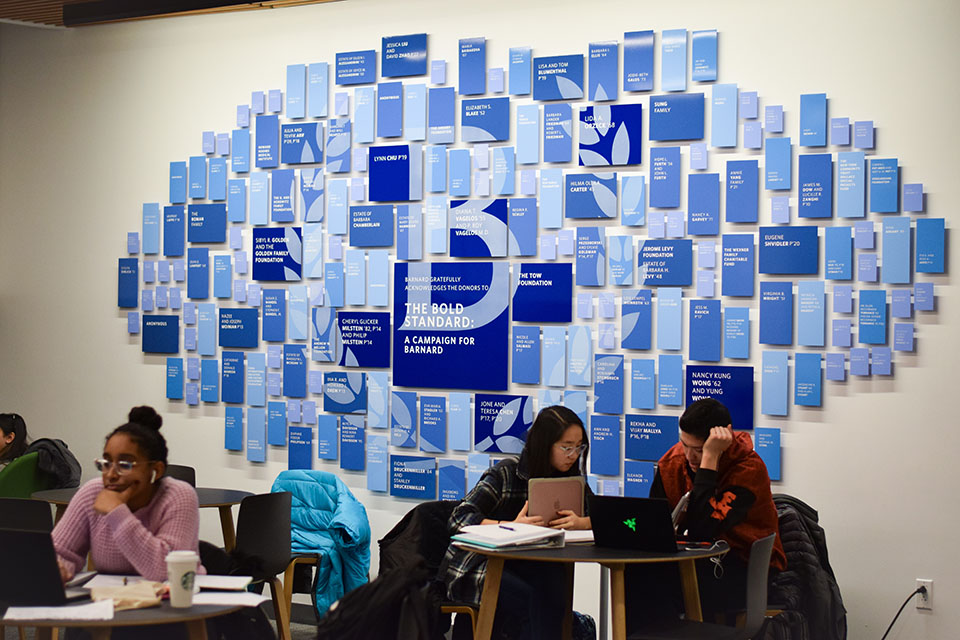 According to data on the campaign’s progress as of December 2018, every area of the campaign has been completed or exceeded set goals except fundraising directed toward the endowment.

The largest fundraising campaign in Barnard’s history, the Bold Standard has funded a $150 million Milstein Center for Teaching and Learning and eleven endowed faculty chairs. But one key area has fallen behind: funding for student financial aid.

After steady growth over the past eight years, Barnard’s endowment has reached the highest point in its history, at $345 million as of September 2018. Historically, Barnard has faced significant fundraising challenges due to a low rate of alumni giving to the college, which has hovered at around 30 percent in recent years. It still remains the lowest of the remaining Seven Sisters colleges, despite Barnard being relatively comparable to these colleges in age and size, while being even more selective. Wellesley College, which has an annual alumni giving rate of roughly 50 percent, has an endowment of approximately $1.97 billion as of 2017.

The size of a college or university’s endowment is directly correlated to the amount of aid it is able to provide its students. Barnard’s small endowment has caused the college to rely on tuition as its primary source of revenue, as it can only retrieve 5 percent of its returns from the endowment each year, and is a large reason that tuition increased by 25 percent from 2010 to 2017.

“Whether it’s air conditioning in the dorms, or having new courses, or allowing the dorms to be open over winter break, these are all good things to do, but when 80 percent of your operating budget comes from tuition, it just means every time you increase the budget you have to increase tuition—there is no other way to do it,” former President Debora Spar said in an interview with Spectator, weeks before she left her role in 2017. “I think the constant stress here is: How do we keep funding all the things we want to do while not having crazy high tuition increases?”

To strengthen Barnard’s giving base and ameliorate long-standing issues stemming from a small endowment, the college launched the Bold Standard campaign in 2011. The $400 million capital campaign aimed to raise funds for the newly opened Milstein Center for Teaching and Learning, increase planned and annual gifts from alumni, and add $175 million to Barnard’s endowment—particularly geared toward establishing professor chair endowments and growing available funds for financial aid. The campaign, the largest fundraising initiative Barnard has undertaken to date, was a core focus of former President Debora Spar, who oversaw the initiative until her departure in March 2017.

Since its launch, the initial fervor of the campaign has dwindled. Although slated for completion in Fall 2018, only $361 million of the $400 million goal has been raised as of December 2018. And though the campaign was largely created to address increasing financial burdens on students, the area of the campaign that still has yet to reach its goal—nearly six months after the intended end date—is the endowment portion, which directly funds student aid.

Administrators in charge of fundraising largely attribute this discrepancy to campaign strategies under Spar, which heavily focused on the Milstein Center—something she cited as one of the college’s greatest needs—and did not explain specifics of how growing the endowment would benefit student aid. Interviews with alumni show that despite close ties with the College community and a desire to contribute to financial accessibility of the school, many remained unaware of the goals of the Bold Campaign, the impact of its initiatives, or its ties to student life.

Furthermore, alumni expressed that until recently, there had been no significant push to create an alumni network around campus initiatives. And though great strides have been made in outreach in recent years, according to both alumni and administrators, Barnard currently does not keep extensive records on alumni beyond basic identifying information. As such, it remains difficult for the College to reach alumni based on their particular backgrounds or interests, meaning that most outreach and alumni connections stem from word of mouth rather than targeted initiatives.

According to data on the campaign’s progress as of December 2018, every area of the campaign has been completed or exceeded set goals except fundraising directed toward the endowment, which remains over $70 million short of its $175 million goal. 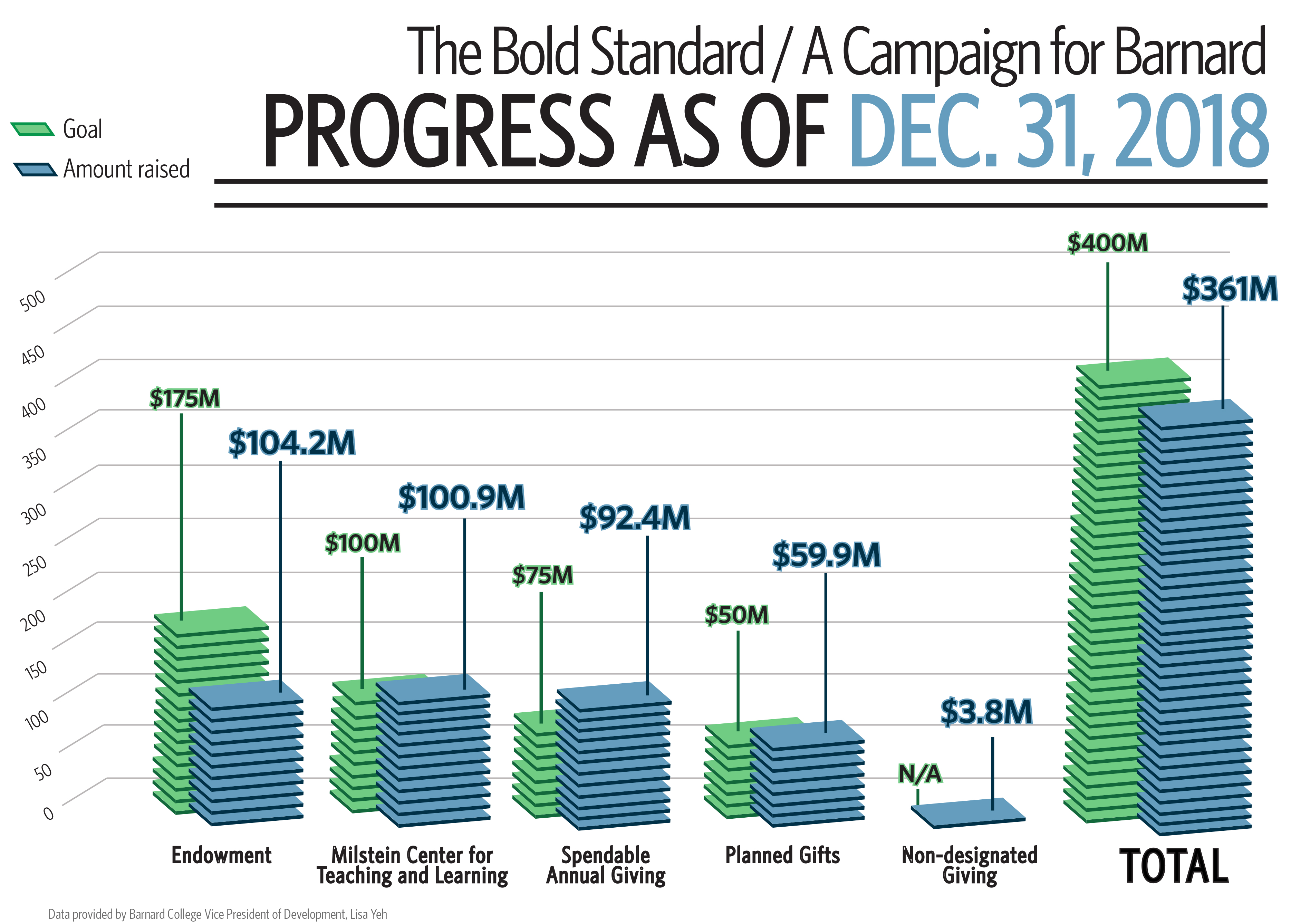 Following the completion of the Milstein Center in fall 2018, however, the goals of the campaign have shifted. In an interview with Spectator last November, President Sian Beilock said the primary focus of the campaign is currently on fundraising to support financial aid initiatives.

“We’re always continuing to push for resources for Barnard,” she said. “We’re continuously talking with our board and with the community about where the most important needs are and how to move forward, and so of course, [fundraising for] financial aid continues to be really important to support our need-blind admissions. We’re in conversations with the [Board of Trustees] to think about next steps of the campaign.”

According to both Vice President for Development Lisa Yeh and Executive Director of Alumnae Relations Karen Sendler, the campaign plans to engage more alumni through events and programming to create stronger networks. Currently, the office has increased its programming in the United States and even across the world, engaging with more faculty to understand their needs, and bringing in trustees and alumni to the table.

According to Yeh, the success of this push was apparent on Giving Day in fall 2018, which saw a 60 percent increase in dollars and 30 percent increase in alumni participation in comparison to the year prior. Further, at the end of the fall semester, Barnard saw $20 million in donations to financial aid; an initial $10 million grant from the Vagelos family was matched by donors within a year.

But, even in light of this shifting focus and improved programming, the absence of extensive and centralized alumni records, inconsistent communications around the Bold Campaign, and impersonal forms of outreach remain barriers in alumni engagement efforts, particularly around the Bold Standard itself. Yeh cited continuing renovation of the database system in hopes of improving targeted engagement.

Courtney Byrne, BC ’07, noted that while she received general news updates about Barnard, she had received no recent emails about fundraising or the campaign, and that more clearly marked communication from Barnard could help encourage her to donate.

“It’s not because I don’t want to [give]; mostly it’s because I’ve forgotten,” Byrne said. “As someone who enjoyed my time at Barnard, I always feel like I should give back to the school … but I think that it’s kind of a two-way street. And it would help me to help them if I got more clear updates on [when and how to give].”

For Lisa Szymanski, BC ’01, traditional channels of outreach like generic mass emails can fall flat, unable to convey the importance of a gift or leave a lasting impact. But personal conversations with students or representatives could have a more tangible effect.

“I don’t even believe I get any emails. Maybe I do, but I probably just pretty promptly delete them or they go to my spam. I do get mailings … that mention the Bold Standard, which again I sort of disregard,” Szymanski said. “But I do feel like if you get people on the phone, it's the best way to reach people because you have a direct audience. I feel like [that] would move me most.”

Furthermore, for some alumni, the campaign’s broad language of fundraising in order to raise the endowment does not particularly galvanize giving.

Szymanski noted that placing a greater emphasis on Barnard’s commitment to financial aid programs and the role of alumni in sustaining these programs should be a bigger focus of the college’s efforts.

“I feel [Barnard] could have done a better job telling people that it’s important that [alumni] give because [it is] one of the better schools at helping people who can’t afford it come here,” she said. “To me, that would be the biggest justification for giving and something that is more likely to make me give money, more than … any sort of building. Because that’s getting at what the mission of the school is.”

Alumni like Byrne have pointed to increased amounts of regional events as good opportunities for networking and community building among different alumni groups, which could then inspire broader philanthropic support.

Lauren Zabel, BC ’07, said she is reminded to donate when her class chair—who is also her friend—personally reaches out to her to ask for donations.

“It always helps to have a personal email rather than a mass generated email that goes to your [spam] folder that just generally get deleted before you open it,” Zabel said. “It always helps to be asked specifically to donate. When you ask someone to give directly, they’re usually more willing to give than if you try to give them a more subtle prompt to give.”

In recognition of past shortcomings, Yeh emphasized that college is seeking to shift its priorities and practices, particularly to focus on financial needs of students, in alumni engagement strategies at Barnard moving forward.

“We are hearing people say that they’re excited, that they feel things are different that there’s more communication. So we’re feeling a change, and it was a nice indication to some of the things that we’ve shifted and changed, think we’re on the right track,” Yeh said. “We want to meet people where they are.”

Correction: a previous version of this article did not mention the $10 million matching gift from the Vagelos family for financial aid at Barnard. Spectator regrets this error.