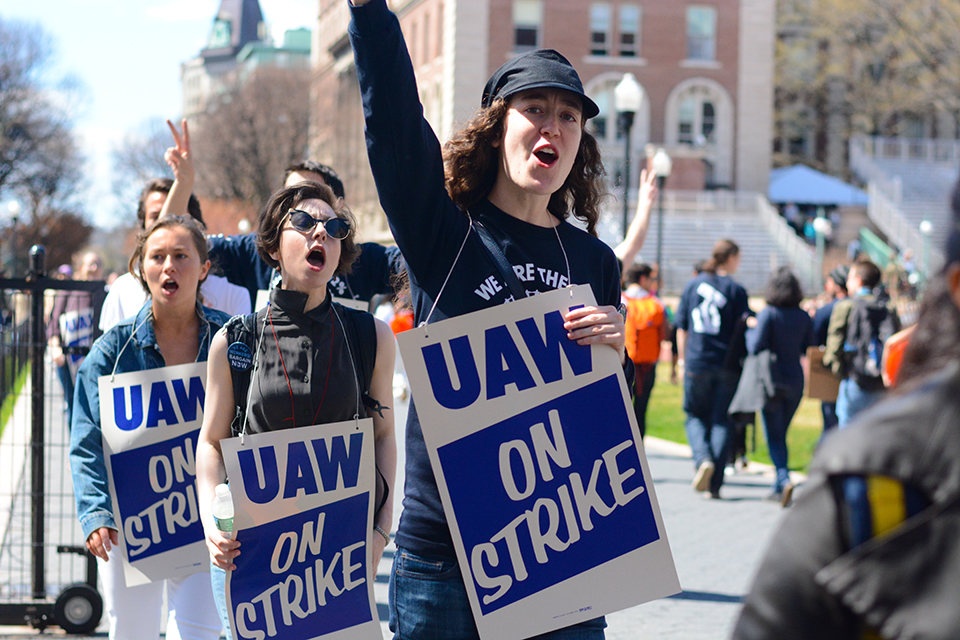 The committee's platform states, “We believe in the power of strike action to further struggles for real solutions to the climate crisis, immigrant rights and dignity, free on-demand abortion, Medicare for All, civil rights for all people, no matter race, religion, gender, sexuality, national origin, physical ability, immigration status.”

With negotiations between Graduate Workers of Columbia and the administration set to begin by the end of the month, a new wave of bargaining committee members is looking to disrupt the traditional bargaining process, intending to leverage the union’s seat at the table to throw support behind issues such as climate change, the Boycott, Divestment, Sanctions (BDS) movement, and anti-gentrification campaigns.

After the University recognized the graduate workers’ union in November and the union approved the bargaining framework with the administration later that month, which mandated that negotiations start by Feb. 25, there was a renewed focus on the part of union organizers to establish the unit’s bargaining priorities as well as their negotiation strategies. In an election that featured multiple slates endorsing different candidates, Columbia Academic Workers for a Democratic Union, or C-AWDU, won four of the six available seats.

While the committee is unsure of exactly what issues it will address at the bargaining table, its platform states, “We believe in the power of strike action to further struggles for real solutions to the climate crisis, immigrant rights and dignity, free on-demand abortion, Medicare for All, civil rights for all people, no matter race, religion, gender, sexuality, national origin, physical ability, immigration status.” It also intends to open meetings to all members of the union for the sake of transparency.

Though many of these issues do not pertain directly to the GWC, C-AWDU thinks that its position can serve as a platform to spur social change.

“We intend to be exceptional in the way we’re bargaining because this is an exceptional situation. There is no other graduate union that has been in this situation. Exceptional times call for exceptional bargaining,” said Dominic Walker, a second-year Ph.D. student, TA in sociology, and bargaining committee member.

According to Walker, the committee plans to draw ties between broader issues of social justice and workplace culture, in addition to using its position at the bargaining table to push for real change at a policy level.

“The model of bargaining that I’d like to see proliferate is one that uses bargaining as a tool to advance the common good, not only the bread and butter issues and interests of the bargaining unit it represents,” said Helen Zhao, a recently elected bargaining committee member from C-AWDU and second-year Ph.D. student in philosophy.

The group formed in large part as a response to the bargaining framework agreement settled on by the administration and the regional UAW. While a majority of the Columbia unit’s rank-and-file members approved the framework, many of C-AWDU’s representatives said that it was decided upon in a hasty fashion, and did not adequately take into account the right to strike. C-AWDU has said it is committed to exercising that power the moment that it becomes available to them.

“Our union will be preparing to strike come April 7, 2020, because I am of the view that it’s only by setting a strike deadline and building a credible strike threat that Columbia will actually be motivated to meet our substantial demands,” Zhao said.

When these objections were brought to UAW, Beverly Brakeman, the UAW Region 9A director released a statement saying, “I recognize there are things I could have done differently and more inclusively. Going forward, I will use this experience as a guiding principle for future decisions.”

The question of whether or not the bargaining committee should broach issues of social justice in the negotiations was a point of contention between the slates running. Other union members expressed concern over bringing broader issues into bargaining, particularly regarding how it would impact internal discussions and consensus.

“They see the union as a vector for social justice. It has larger goals, like supporting BDS. I’m a super liberal person but I don’t consider the union the place to address those issues. I think democratic means like voting is how you address those things,” said Miles Richardson, a second-year Ph.D. student in systems biology who ran for a bargaining committee position with the group United for a Strong Contract.

In addition to electing new bargaining committee members, the union voted on two referendums specifying the details of the open bargaining process, which disapproved of off-record sidebars during negotiations and promised that any post-negotiation mediation will be public to all union members.

While the notion of open bargaining was not up for debate in this election, candidates disagreed on how the union should vote for the referendums. C-AWDU was against sidebars under any conditions and thought that negotiations should be suspended during the summer months. Groups such as United for a Strong Contract, which won one seat on the bargaining committee, believed that this would limit the bargaining committee’s flexibility.

“We shouldn’t necessarily take any tools off the table. We shouldn’t declare to the administration ahead of time how we’re going to approach bargaining. If it’s strategically necessary to have some conversation at some point to have off the record, that’s something we would have considered,” said Matt Mazewski, a fourth-year Ph.D. student in economics and a USC-endorsed candidate for the bargaining committee.