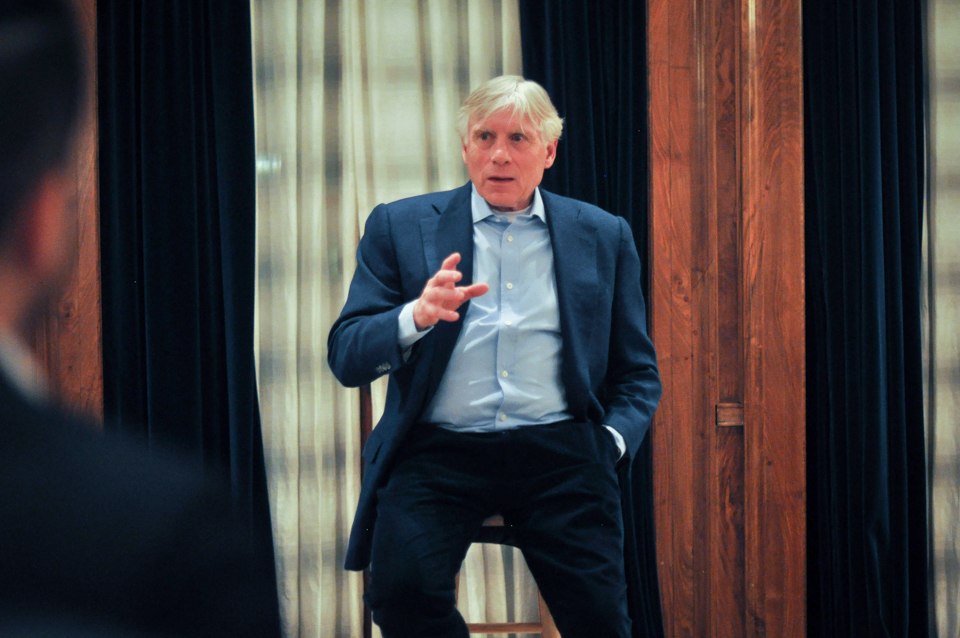 Fireside chats take place at Bollinger's home several times a year and give students the opportunity to ask him questions.

University President Lee Bollinger shared his views on the University’s role in an era increasingly dominated by the forces of globalization, political uncertainty, and the free speech debate during a fireside chat on Thursday.

Students at the chat began by asking Bollinger to comment on the statements FBI Director Christopher Wray made in recent weeks regarding the potential threat that international students—specifically from adversarial nations—pose to U.S. national security interests. Bollinger acknowledged the issue, but answered by defending the long-standing tradition of transparency in academia.

“Everything we do here ends up in published places. We believe in open search for truth, and we believe in publishing that and being open about it. And we also believe in bringing in the best and most talented people all over the world. This has been a critical part of the genius of the American system,” he said. “All that said … we are very much aware when someone comes in—maybe intentionally, maybe from the beginning—and tries to steal intellectual property from the institution and takes it out and uses it for their advantage. … We watch for it all the time.”

On the broader issue of Columbia’s dual mandate as both an American and international institution, Bollinger attributed the University’s culture of openness as fundamental to engaging with the world in which we live. Citing the environmental debate as an issue where radio and TV brought the discourse from a local to a national level, Bollinger asserted that the Internet will—in a similar way—necessitate wider viewpoints. Bollinger further alluded to Columbia’s Global Centers, which he also touted in a fireside chat last October, and other University-wide initiatives, such as Columbia World Projects, as effective responses to an increasingly interconnected world.

“The world has changed pretty dramatically. … The Trump administration and others can be against globalization, and they can do all kinds of things, but the forces of globalization are just too powerful to stop,” he said. “My view was that we had to, as a University, help our faculty and students get ready for that world and be part of it.”

Students also pressed Bollinger on issues of free speech, his area of academic expertise. Addressing a question regarding last year’s efforts by Barnard students to recommend that the administration divest from eight companies with ties to Israel, Bollinger flatly rejected the proposal.

“I don’t support that. … We should rarely, rarely make a decision not to do something unless there is a consensus in the campus that this is wrong,” he said. “On the issue raised, there is not a consensus; there is a whole host of views about this. … On the cases where [change] has happened, there has been a consensus.”

Bollinger also discussed hate speech in light of an incident that went viral last December when a white student harassed a group of predominantly black students outside Butler Library. In drawing the distinction between free speech and hate speech, Bollinger drew on many years of legal precedent that has largely asserted that controversial and even hurtful speech should be protected. He spoke at length about the First Amendment’s unique role in this case.