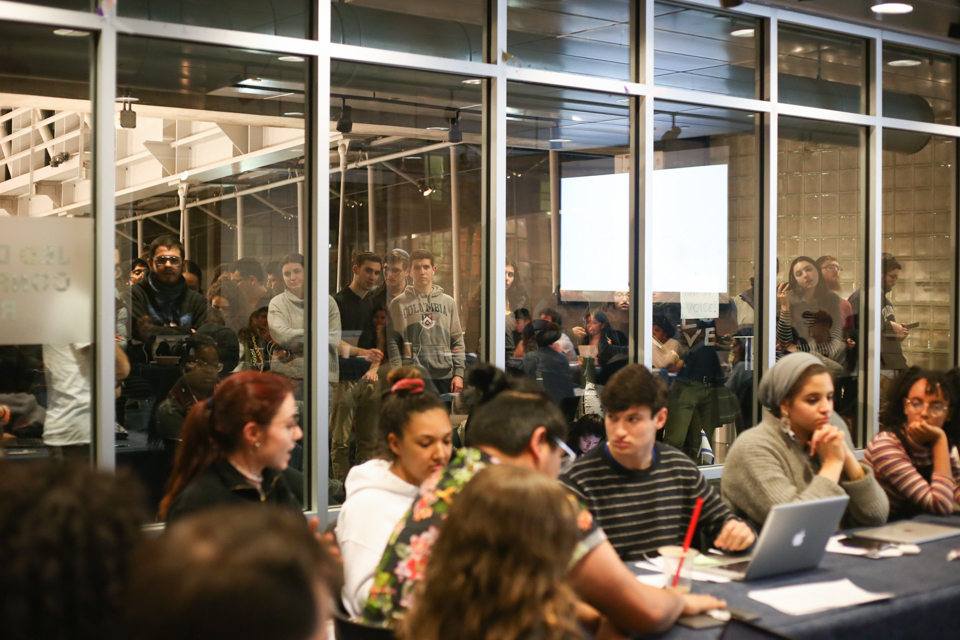 Over 150 people attempted to attend the meeting, though an overwhelming majority were placed in an overflow room or watched the debate through the glass window.

Following a four-hour meeting that attracted over 150 spectators, saw two student representatives threaten to quit the council, and drew tears from attendees, the Columbia College Student Council shot down a referendum to gauge student support for the Boycott, Divestment and Sanctions movement via an anonymous vote Sunday night.

CCSC voted overwhelmingly against including a similar referendum on the ballot in 2017, but the debate over BDS has continued to grow on campus. Last spring, the Barnard Student Government Association added a referendum to its ballot asking students whether or not they support Columbia University Apartheid Divest’s campaign to divest from companies that “profit from or engage in the State of Israel’s treatment of Palestinians,” aiming to reflect the national BDS movement calling for the end “international support for Israel’s oppression of Palestinians.”

The referendum, which saw the highest voter turnout for any SGA election, passed with a 64.3 percent majority, though Barnard President Sian Beilock announced prior to the election that she would ignore its results.

Neither Columbia nor Barnard publicly discloses all the details of where its endowment is invested, meaning that students have limited access to information on the extent to which the University holds ties with relevant companies.

Sunday’s vote—which council members elected to hold anonymously—failed to meet the two-thirds majority needed to pass the referendum, with 20 council members against, 17 in support, and one abstention from CCSC President Jordan Singer, CC ’19. Members from Aryeh, Students Supporting Israel, and the CUAD coalition, composed of representatives of Columbia Students for Justice in Palestine and Columbia/Barnard Jewish Voice for Peace, spoke before the council while many participants offered commentary in response.

Students waited for hours on the Lerner ramps before the meeting in the hope of getting a seat in the Jed. D Satow Room, where the meeting took place, but Public Safety officers allowed only 19 students to enter. Over 130 students were forced to watch the livestream from a nearby overflow room, where they were unable to ask questions or participate in the debate. And by the end of the meeting, many had abandoned the overflow room altogether, gathering outside the main room to watch the debate through the glass. 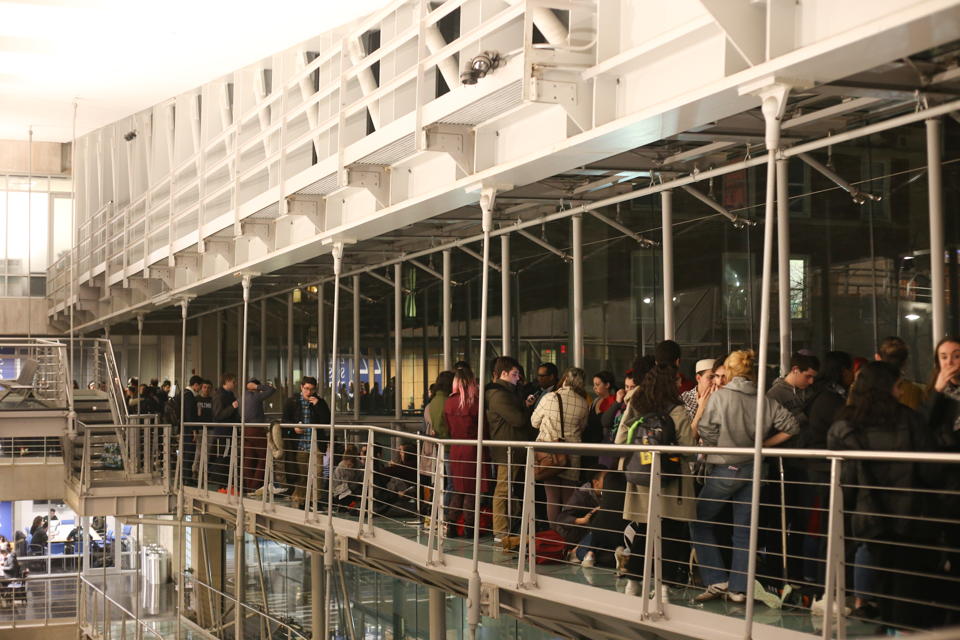 Students lined up along the Lerner ramps as early as 6 p.m. The council meeting began at 8 p.m. (Beatrice Shlansky / Columbia Daily Spectator) 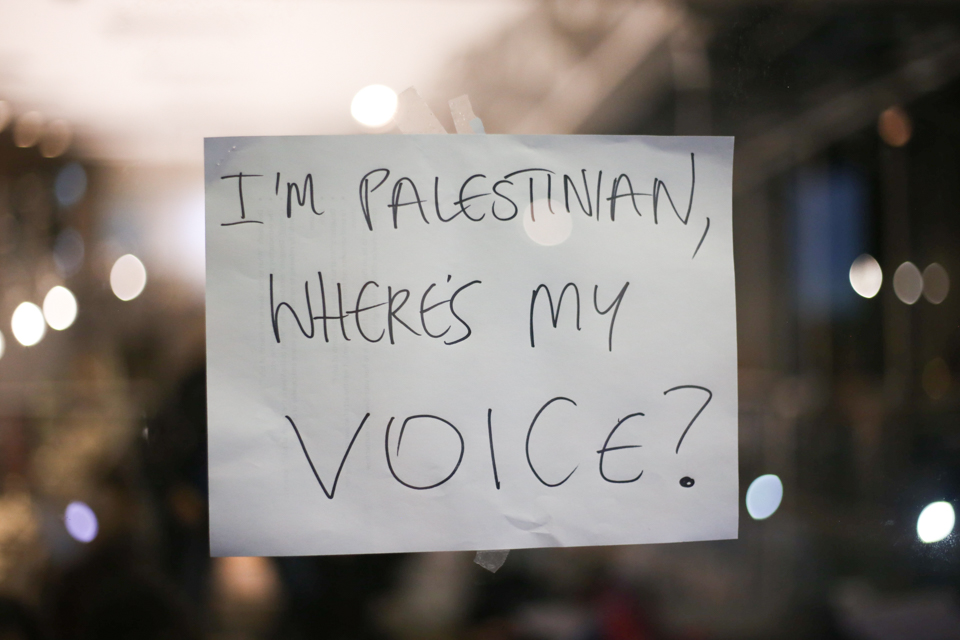 A student who was unable to access the room where the debate occurred posted this sign on the glass wall of the Satow room. (Beatrice Shlansky / Columbia Daily Spectator) 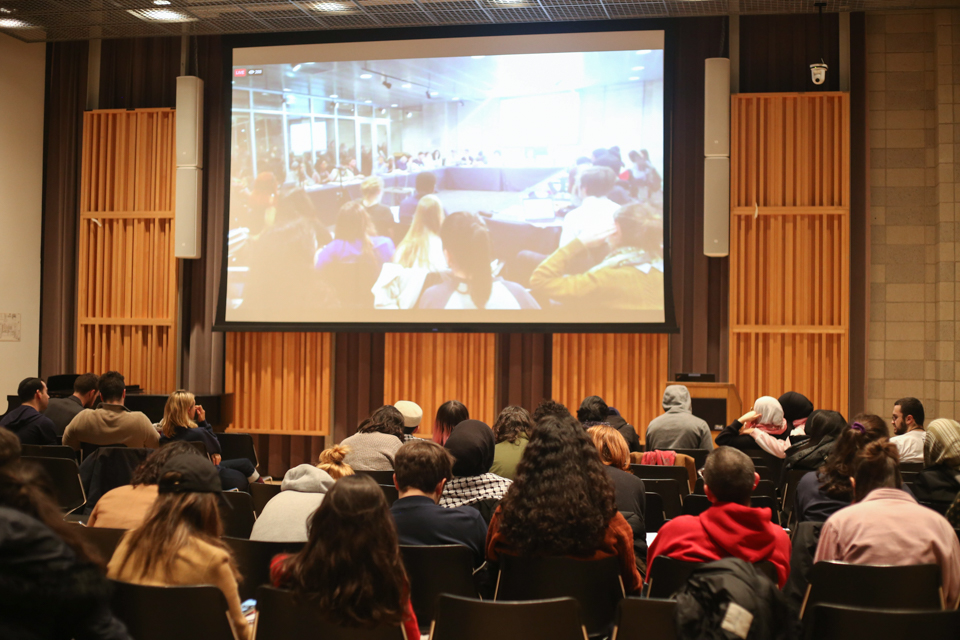 Only the first 19 students in line were allowed into the Satow room, where the meeting is held. More than 130 students watched the debate via livestream in a nearby room. (Beatrice Shlansky / Columbia Daily Spectator) 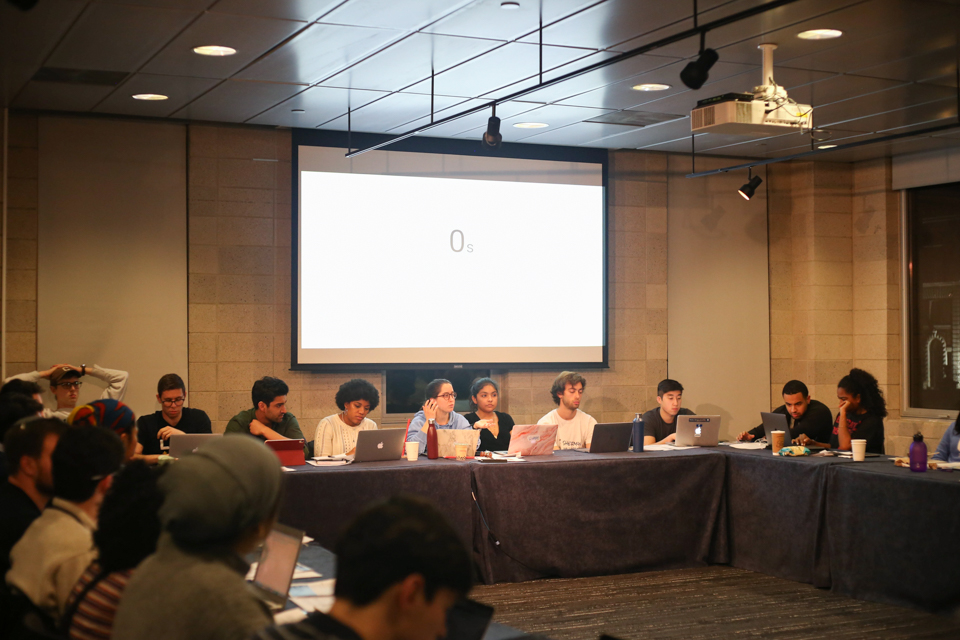 Jordan Singer, CC'19 and CCSC president, abstained from voting on the secret ballot due to the restrictions of her role. (Beatrice Shlansky / Columbia Daily Spectator) 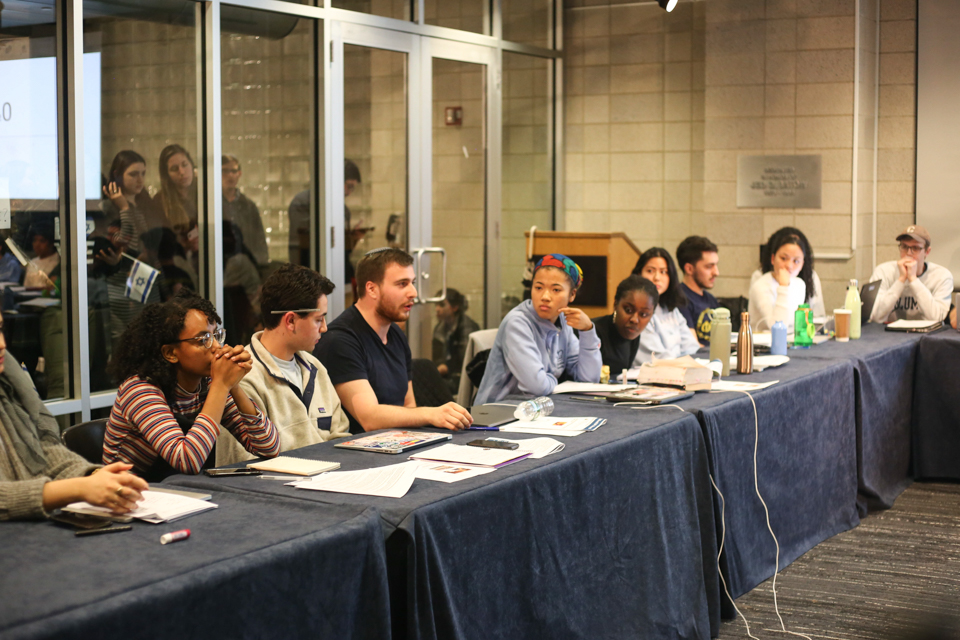 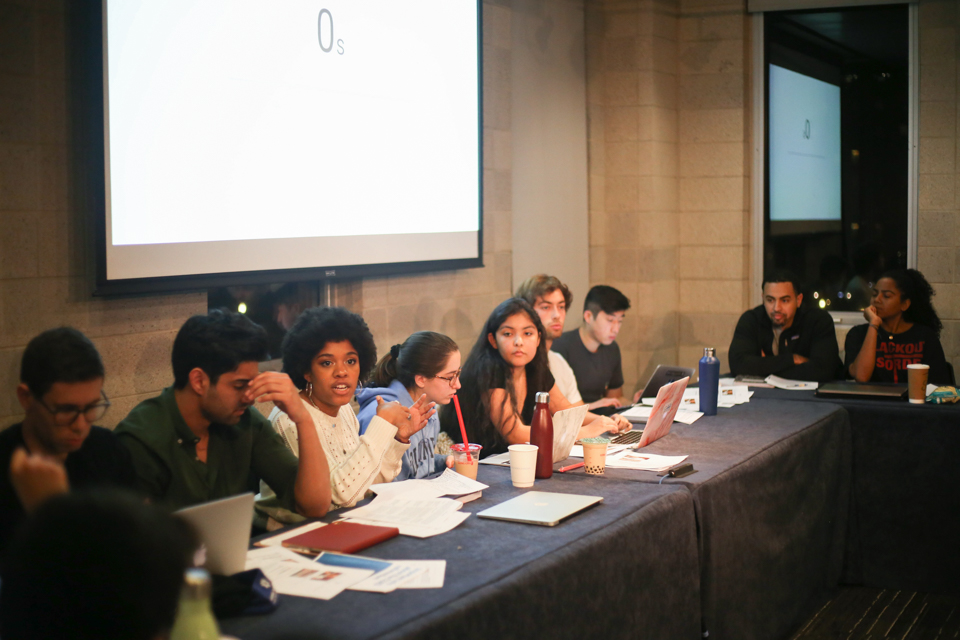 VP Policy Elise Fuller, CC '19, argued that the referendum would be an opportunity for students to learn about the issue from each other. (Beatrice Shlansky / Columbia Daily Spectator) 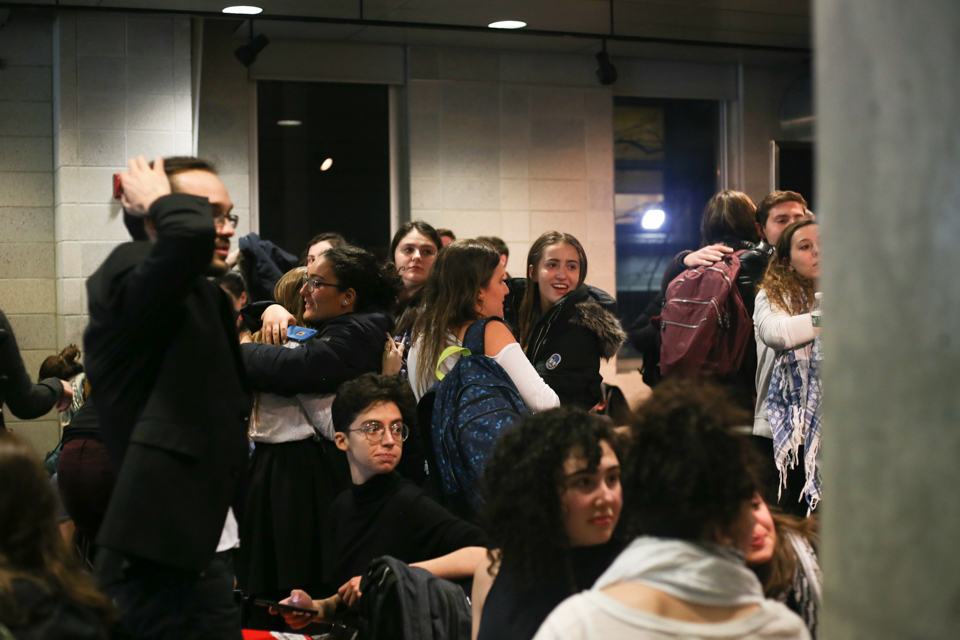 Students who were both in support and against the referendum hold each other after the vote is announced. (Beatrice Shlansky / Columbia Daily Spectator) 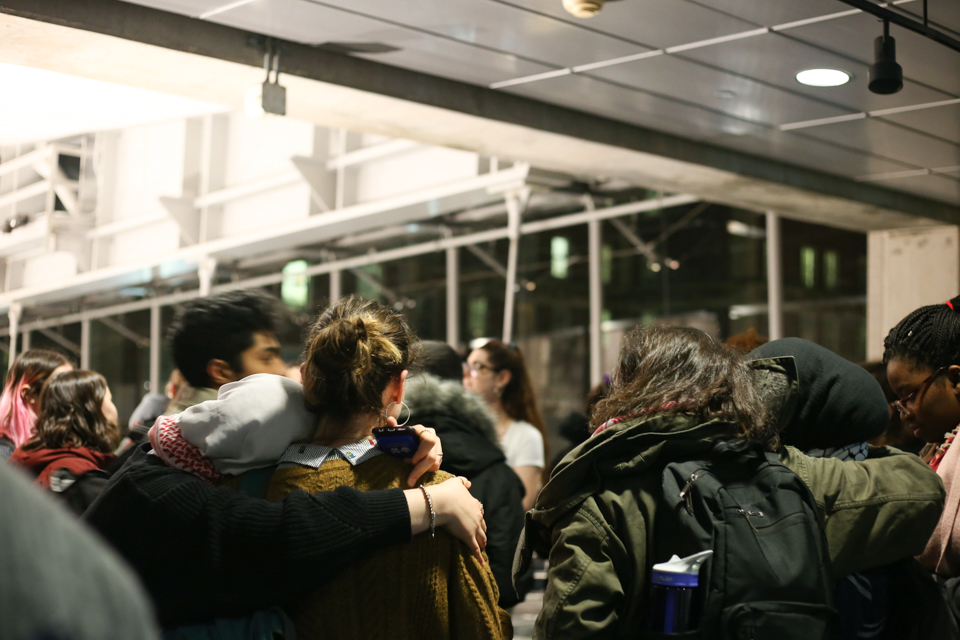 Students who were in support of the referendum console each other outside of the Satow room after CCSC voted against the referendum. (Beatrice Shlansky / Columbia Daily Spectator)

Much of the debate among council members centered on the student council’s mission statement, which includes both the responsibility to understand the views of the student body and to foster community on campus. During the meeting, students from both sides called attention to broader issues of discrimination against students of different identities.

Opponents to BDS pointed to the past Barnard referendum as reason for CCSC to vote down this referendum, asserting that Jewish students felt targeted by the vote and the surrounding debate last semester. Many shared personal experiences with anti-Semitism and division on campus during the debate around the Barnard referendum.

“The time period during the Barnard SGA BDS vote [was] the most emotionally challenging parts of my college career. Never before had I felt so unsafe in my own environment,” Sarah Senkfor, BC ’19, said. “I did not feel safe walking around wearing my Jewish star like I had for the past 2.5 years.”

Those in support of the movement, however, cited the potential investment of endowment money as an issue that forces students to endorse a certain political stance that they did not agree with.

“I see this as an argument about what tution dollars are being used for,” Alla Issa, CC ’21, said. “Much more than that, it should be an argument about ethical investing. I don’t want my money to be used … in a way that is fundamentally counter to my beliefs.”

Proponents also argued that the referendum opened up debate to the wider student body and gave more students a voice—instead of taking a position on the issue of BDS itself.

“Who are we to say what people should or should not talk about?” University Senator Toqa Badran, CC ’19, said.

Naye Idriss, CC ’20 and a member of SJP, pointed out that the referendum would foster dialogue around this issue, which has been hotly debated on Columbia’s campus for decades.

“It is exactly what we are asking, to have these conversations. … I do not think it is fair for the people in the room—a very limited amount of people here—to make a decision for the campus,” Idriss said.

Others responded that independent of the implications of the referendum itself, presenting the option to the student body could be harmfully divisive.

“We will know it will tear our community apart. ... This is a permanent wound that we won’t be able to heal from,” CCSC Vice President for Finance Adam Resheff, CC ’19, said.

Resheff and CCSC Representative for Disabilities Services Aaron Liberman, CC ’19, said they would quit their positions if the council voted to present the referendum to the student body.

But class of 2019 Representative Tarek Deida, CC ’19, said he believed that CCSC, and the Columbia community more broadly, should not avoid this discussion just because it is divisive.

“On both sides people feel very strongly about it, but I don’t believe we should try and run away from that toward this idea of perfect cohesion,” Deida said.

At a fireside chat for undergraduate students last Thursday, University President Lee Bollinger, citing the lack of consensus on campus, flatly rejected the idea of divestment and the results of the Barnard referendum.

“I don’t support that. … We should rarely, rarely make a decision not to do something unless there is a consensus in the campus that this is wrong,” he said at the event. “On the issue raised, there is not a consensus; there is a whole host of views about this. … On the cases where [change] has happened, there has been a consensus.”

The conversation at the meeting occasionally turned to arguments over the facts of the Israel-Palestine conflict. Singer, who refrained from casting a vote or voicing an opinion through the duration of the debate due to the restrictions of her role as council president, repeatedly urged council members and student speakers to stick to discussing the issue as it relates to campus.

“We aren’t here to adjudicate this issue in the Middle East,” she said.

She added later in the conversation that she was “not trying to open a discussion into what is going on on the ground in Israel.”

In an unusual move, the council voted to use a secret ballot, with many arguing that a public vote on this specific issue would cause members to be targeted for their position. Several council members shared stories of feeling personally threatened or confronted about their public votes to include a referendum in 2017. In that instance, some had unsuccessfully advocated for a secret ballot, voicing concerns that votes might be compromised due to the presence of a large crowd.

“This is a time for us to vote our conscience. And if many of us feel uncomfortable doing so because they don’t want to face the same kind of threats that I have faced in the past, I give you guys that right to fear for your own well-being more than being transparent or for your constituents to know how you voted,” Badran said.

Singer urged council members not to vote via a secret ballot during the meeting, citing the need for members to be transparent to their constituents.

In an interview after the meeting, she said that she was not approached by council members directly citing their own experiences being threatened, but said that students instead referenced general concerns.

“I really believe that CCSC should be as transparent as possible, and it is a contentious issue and we owe it to our voters to vote openly … but I do recognize the validity of student concerns and I want them to know very clearly that if I thought they were in significant jeopardy … then I would not be speaking out so strongly against a secret ballot,” she said.

The final announcement of the vote left students in tears of joy and distress; some students sighed in relief as others gathered outside of the room, chanting “From the river to the sea, Palestine will be free.”

Correction: A previous version of this article stated that Columbia and Barnard release no information on the investments of their endowment, while in reality, limited details of investments can be found in the schools’ respective 990 forms that disclose their tax returns. Spectator regrets this error.