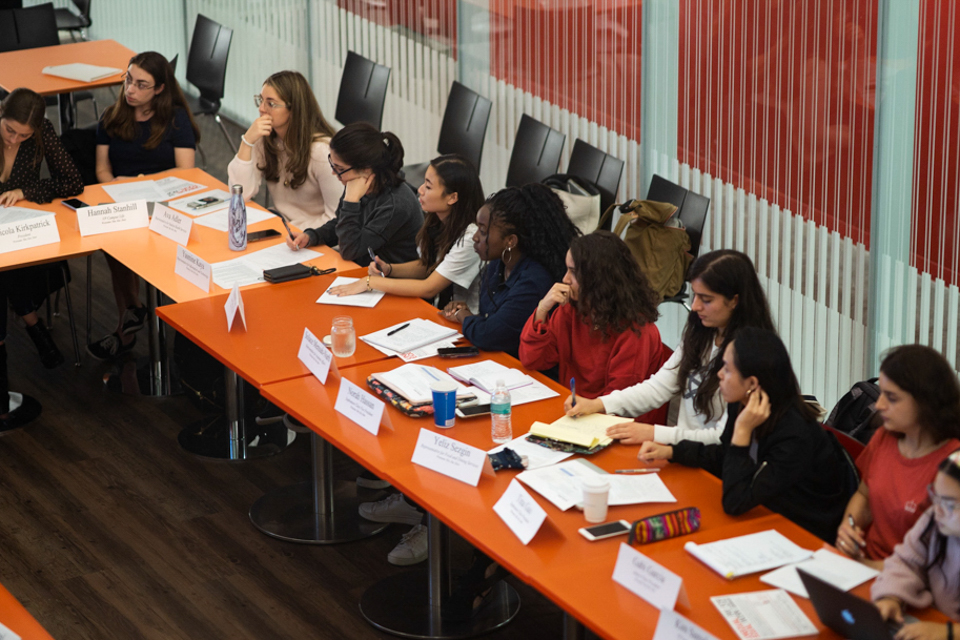 Tensions around the role of Public Safety officers came to a head last December when Julian von Abele, CC ’21, harassed a group of primarily black students outside Butler Library., The event raised questions among students about the proper protocol for Public Safety officers responding to racist incidents. Following the incident, Barnard released a statement announcing that it had banned von Abele from campus, even though the college has not provided details of how this ban will be enforced.

At the meeting, SGA representatives directly addressed Antonio Gonzalez, executive director of Barnard Public Safety, and Gary Maroni, director of emergency management and fire safety for Barnard, both of whom spoke on the role of Public Safety in responding to reported incidents on campus, in addition to the office’s relationship with the New York Police Department.

Representative for Academic Affairs Solace Mensah-Narh, BC ’21, asked how Public Safety will ensure proper protocol in response to incidents of racism or harassment against students of color, especially in light of Barnard’s ban.

Gonzalez’s response revealed that Barnard has not worked with Public Safety to enforce the ban, as Gonzalez himself was not aware of the details of the incident.

“Moving forward, if you give a complaint and aren’t satisfied with the response reach out to myself, so that I can follow up on that,” Gonzalez said.

A number of SGA members, including Representative for Campus Affairs Chelsea Sinclair, BC ’21, raised further concerns about how students of color on campus continue to feel unsafe when interacting with Public Safety, due to the perception that Public Safety officers function as police officers.

“I’ve heard many times that Public Safety hires a lot of former cops, and that does make me uncomfortable as a black student, because in the political climate we live in, police officers tend to make me uncomfortable,” Representative for Arts and Culture Phanesia Pharel, BC ’21, said.

“Students should communicate their concerns to us, and then we can address their issues,” Gonzalez said. “We have retired law enforcement and our team is diverse. I spent 20 years in the NYPD; I understand the dynamics at play here.”

Maroni added that if a student does not feel comfortable with Public Safety, there are other ways to report an incident, such as through Title IX.

Students at the meeting also questioned the Public Safety representatives regarding their role in maintaining campus safety on a broader scale. Junior Representative to the Board of Trustees Jessica Cruz, BC ’20, raised concerns regarding the presence of the United States Immigration and Customs Enforcement and the Department of Homeland Security on campus. According to Cruz, there have been multiple sightings of border patrol trucks in the vicinity of Barnard and Columbia. Homeland Security was also recruiting at the spring job fair.

Gonzalez said he was not aware that ICE has been on or near campus prior to the meeting, but called on students to notify Public Safety if sightings have been made.

“We value and protect our students, and if you know that ICE is on campus, we want to be made aware,” Gonzalez responded. “Any form of law enforcement requires a warrant to come onto campus and must interface with Public Safety. We feel strongly about protecting our students’ rights.”

However, he clarified that although an investigation could potentially be conducted, a Public Safety officer does not have enough legal power to take action.

“If ICE has a legitimate reason to be detaining someone, we are civilians and there isn’t much we can do,” Gonzalez said. “Public Safety officers could be arrested for obstruction of justice [if they attempted to intervene].”

Gonzalez emphasized that Public Safety is taking steps to improve its relationship with the student body.

“We’re trying to move in the right direction with multiple projects that we have going on, and with building a relationship with the SGA,” Gonzalez said. “We want to work with you; we created a form to receive feedback on desk attendants from students, and continue to want to communicate with you and be open.”