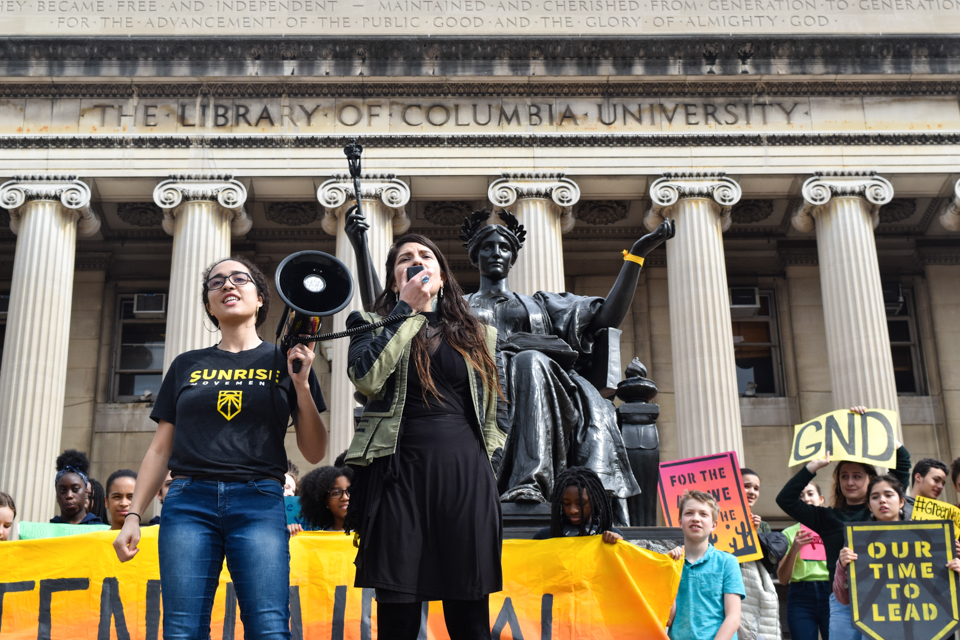 Friday’s “Global Climate Strike” comes as part of an international student response to climate change inspired by 16-year-old Swedish activist Greta Thunberg, who began skipping school to rally in front of the Swedish parliament in August of last year.

Naomi Hollard, CC ’19 and founder and hub coordinator of Sunrise Columbia, said she hopes that the climate strike will have an impact beyond the University, but emphasized the need to bring greater awareness on climate change to the campus.

As the primary speaker during the event, Inslee thanked the students for their activism, noting the significance and urgency of their support in the discussion on climate change.

Notable student speakers included Xiye Bastida Patrick, a New York high-school activist from Mexico who has spoken about climate justice to the United Nations, and Alex Loznak, CC ’19 and plaintiff in Juliana v. United States, a lawsuit seen by the Supreme Court accusing the government of violating youth rights by allowing climate-damaging activities.

Bastida Patrick advocated for the Green New Deal, a set of proposed economic programs that aim to address climate change and inequality, and highlighted the role of indigenous peoples and youth in the fight against climate change.

“The climate catastrophe is our present, but we cannot let it be our future,” Bastida Patrick said. “Climate change impacts marginalized communities and communities of color the most, which is why we need the Green New Deal, because it addresses both climate change and social justice.”

Other outside speakers included two students from Manhattan Country School, a private K-8 school, many of whose students participated in the climate strike.

Tom Grattan, a seventh and eighth grade English teacher at Manhattan Country School, supervised his middle-schoolers at the event and spoke to the importance of their participation.

“Even though they’re not old enough to vote, they still have a lot at stake for them, and they really realized that,” Grattan said. “They were really excited about participating today, so we as a school decided we wanted to facilitate that for the students who wanted to take part.”