A year after his passing, Marcellus Blount remembered for shaping Columbia’s institutional commitment to diversity

A year after his passing, Marcellus Blount remembered for shaping Columbia’s institutional commitment to diversity 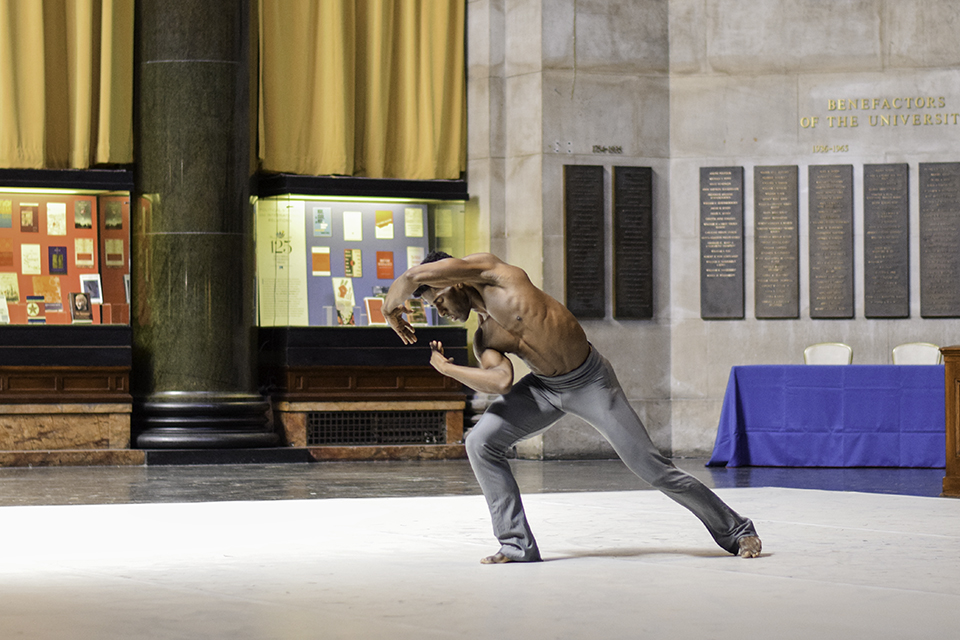 The event opened with a tribute to Blount’s love of dance with a performance by Lloyd Knight, a principal dancer of the Martha Graham Dance Company.

Former students and colleagues gathered in Low Library on Tuesday afternoon to celebrate the life of Marcellus Blount, a former literary scholar and professor who shaped the University’s commitment to academic diversity for more than three decades and who passed away last May.

Over the course of his time at Columbia, Blount was the first full-time black faculty member of the English department, as well as the first black, openly queer junior faculty member in the Arts and Sciences. He played a pivotal role in the establishment of both the Institute for Research on Women, Gender, and Sexuality and the Institute for Research in African-American Studies, paving the way for significant future faculty diversity initiatives.

The event, called “Agents of Change: A Symposium in Honor of Marcellus Blount,” was the first in a series on faculty diversity and equity organized by the Arts and Sciences’ Committee on Equity and Diversity, established last fall to guide the implementation of an expansive set of initiatives surrounding faculty diversity, inclusive department climates, and harassment and discrimination, among others. In recent years, the University has demonstrated its increased focus on faculty diversity, having set aside $185 million to advance these initiatives.

The event opened with a tribute to Blount’s love of dance with a performance by Lloyd Knight, a principal dancer of the Martha Graham Dance Company. Guests then moved to the faculty room to enjoy a panel of speakers who shared stories and essays inspired by Blount’s life and the work he performed. In her opening remarks, Ellie Hisama, professor of music, member of the CED, and professor in IRWGS, emphasized the key role Blount played in diversifying the University.

“The Equity Committee Reports, issued publicly by Columbia last October, rest on the foundational work by Marcellus and so many others,” Hisama said. “Marcellus was deeply committed to bringing about greater diversity and equity at Columbia for over 30 years.”

George Aumoithe, a postdoctoral research associate at Princeton, Rebecca Pawel, a student of Blount’s, and Kendall Thomas, a colleague of Blount’s and director of the Center for the Study of Law and Culture at Columbia Law School, appeared on a panel that followed the performance to read essays they had written in dialogue with Blount’s work.

Aumoithe spoke on the concept of “inheriting a library” of knowledge from Blount, emphasizing the way Blount battled for and shaped the future of representation for marginalized groups in academia.

“In a sense, by so often taking up space in the background, by working through the interstices of academic administration, and by putting energy into introducing anthologies like Representing Black Men, Marcellus demonstrated an ethic of honoring the voices of his colleagues, comrades, and intellectual children,” Aumoithe said.

James Shapiro, English and comparative literature professor, also spoke during the symposium event, sharing memories of Blount’s involvement in the Hamilton blockade of 1987.

In March of 1987, a group of white students used racial slurs and threatened a group of black students, resulting in a violent fight in front of the space which is now Lerner Hall. A month later, in protest to the allegations that then-President Michael Sovern had interfered on behalf of the white agitators, the Concerned Black Students of Columbia began a blockade of Hamilton Hall. Police were soon called into campus to break up the blockade, marking the first time since protests in 1968 that the University called New York Police Department to interfere with campus activism.

Blount, after witnessing the arrest of protesting students, began to gather information from the students to pass on to lawyers. He was subsequently detained with them for no apparent reason, according to Shapiro, though nothing resulted from a University investigation into why Blount was arrested.

[RELATED: Marcellus Blount Loved to Dance: Reflections on his 33 Years at Columbia]

In response, many faculty members were enraged, including Eric Foner, DeWitt Clinton professor emeritus of history, who began a petition in response to the incident, asking for further faculty diversity and resources devoted to an African-American history department.

The petition received a great deal of support, something Shapiro noted would not have been possible without Blount’s actions. Shapiro expressed his sorrow that Blount had not lived to see the end product.

Although Blount was physically absent, his voice was heard once during the event. A recording of his from the IRWGS oral history project in 2015 was played, in which Blount discussed his inspiration to engage in feminism, encompassing his overall message of representation.

“The institution was as bereft of women as it was of African Americans,” Blount’s voice said. “I knew that, but I don’t think I fully understood the ramifications of that, that the curriculum of the institution didn’t reflect society at large.”