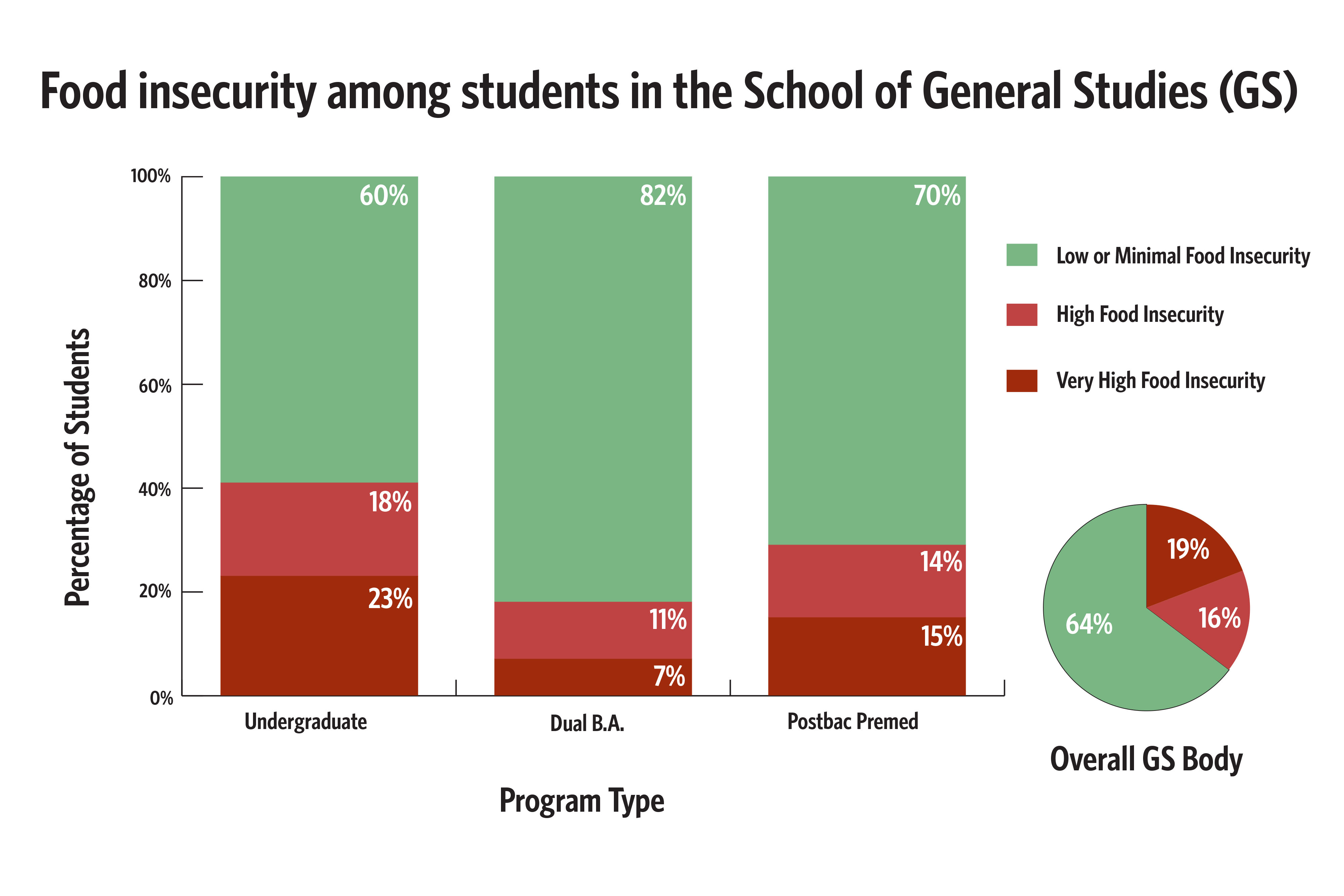 More than one in three non-joint/dual undergraduate students in the School of General Studies experience very low or low food insecurity, according a survey conducted last spring by the GS administration.

The survey, which was distributed to gauge food insecurity and its relationship with academic performance, asked students a standardized six-item short form of the food security module from the U.S. Department of Agriculture. Among all GS students, including both joint/dual-degree—between schools such as the Science Po or Jewish Theological Seminary programs—and postbaccalaureate students, the survey saw a 60 percent participation rate and 56 percent full completion rate.

Though comparative data is not available, rates of food insecurity are likely significantly lower at Columbia College and Engineering, according to administrators. Meeting the financial needs of students through financial aid has been a significant point of hardship for GS, where almost 40 percent of students receive Pell Grants—unlike Columbia College and the School of Engineering and Applied Science, GS does not meet the full demonstrated need of its students.

In 2018, CC and SEAS spent 2.29 times the amount GS did on aid per student based on enrollment and aid spending figures.

While General Studies’ mission delineates that its students receive the same quality education as those at Columbia College, significant differences between the two schools—namely the school’s perennial lack of funds and smaller endowment—create disparate comparisons, particularly in relation to financial aid. General Studies is also a significant revenue driver for the Faculty of Arts and Sciences—a notoriously cash-strapped budgetary unit—that brought in a tuition income of over 90 million in 2018.

Similar to her late predecessor Peter Awn, Dean of the School of General Studies Lisa Rosen-Metsch emphasized that issues of food insecurity—and more broadly the need for aid—remain at the forefront of her priorities.

“From the moment I was being considered as dean, I heard from Dean Awn and Vice Dean Rodgers that [financial aid] has been an issue of concern to GS for some time. It is clearly a problem. What I think is driving all of this insecurity is students not being able to have the resources they need to be able to thrive here,” Rosen-Metsch said.

Resources available for food-insecure students include six emergency meal swipes per semester provided by Columbia Dining and disbursements from the Food Pantry at Columbia, a student-run, highly utilized organization for students in need. Data collected by the pantry shows that one-third of its total disbursements as of February have been given to GS students. But, the University has received criticism for its failure to yet provide any regular funding to the pantry.

The vice chair of events coordinator for the pantry, Matthew Linsky, GS ’20, stated that the lack of resources and subsequent food insecurity has wide-ranging impacts for students.

“Food insecurity at its core is just hunger. It’s a basic need. The thing is, that’s not the cause of food insecurity, [the cause is] a lack of funds. Food insecurity is a symptom of not having enough money to nourish yourself,” Linsky said.

Rosen-Metsch, who has a background as a social scientist in public health, also emphasized that the social determinants of health, like food and housing insecurity, affect students’ academic and overall well-being.

“Food and housing insecurity clearly affect our health and well-being, and you can certainly see this in performance in class and in retention. My educated guess is that they would all be associated with mental health: if you’re worrying about eating, you may have more anxiety. All [are] a complex array of factors that are related,” Rosen-Metsch said.

Data also showed that food insecurity is nearly three times as prevalent for students in the 2.0-2.49 GPA range, compared to the 4.0+ range, suggesting a correlation between low food security and weaker academic performance.

On a broader scale, though GS administrators have made a significant push in fundraising, a limited endowment—typically the main source of financial aid—has greatly hindered the school’s capacity to meet student need. According to data collected by the University, there remains $37.5 million in unmet need at GS, though the figure is based on an approximation from survey data.

When preparing to step down from his deanship, Awn voiced the urgency of the financial aid issue at GS and its importance in the success of the school moving forward.

“Even though we’ve been right up-front about the financial aid issue, that could make or break the school in the long term. There’s no choice about it,” Awn said in an interview with Spectator in 2016.

Dean Rosen-Metsch spoke to the interconnectedness between the lack of financial resources for students and their well-being.

“People are making decisions to take whatever limited resources they are and they’re sacrificing their overall health. The social determinants of health—food insecurity, housing, safety—clearly affect our health and well-being. They are all related,” Rosen-Metsch said.