Panelists, including Ta-Nehisi Coates, discuss role of journalism in human and civil rights at J-School symposium

Panelists, including Ta-Nehisi Coates, discuss role of journalism in human and civil rights at J-School symposium 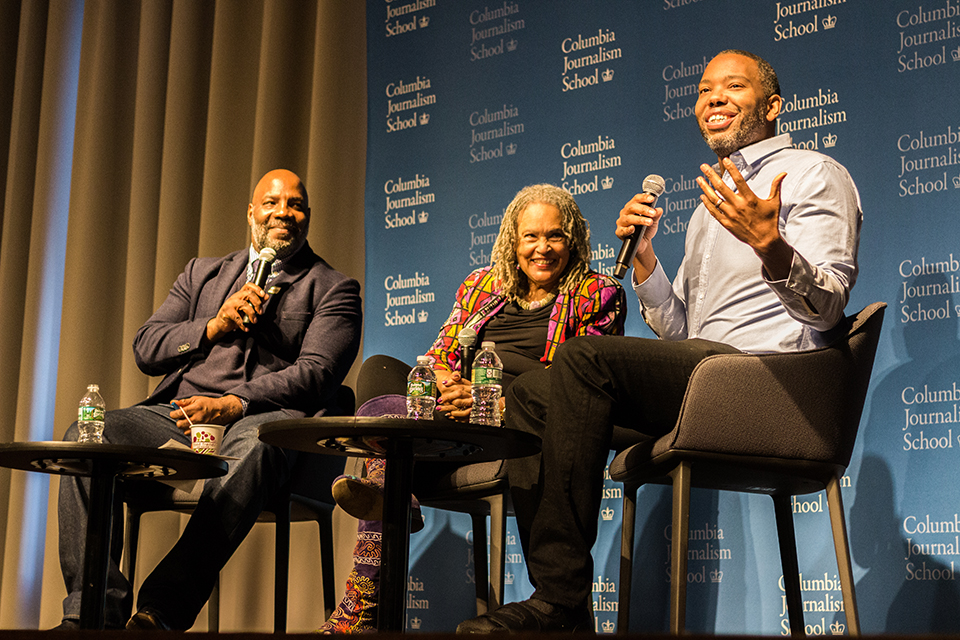 The panel discussed the state of affairs ofcivil and human rights in 2019 and journalists’ responsibility in reporting those issues.

Panels of renowned journalists and professors discussed the evolving role of journalism in covering and engaging with the current political climate at a Journalism School event entitled Born Free and Equal: A Symposium on Journalism and Human Rights on Monday.

These panel discussions were part of various activities and events held by the Ira A. Lipman Center for Journalism and Civil and Human Rights, founded in 2017, which empowers journalistic work in reporting on issues such as race and human and civil rights. Among featured panelists were renowned journalists including Associated Press National Writer Martha Mendoza, former foreign correspondent for National Public Radio Charlayne Hunter-Gault, and former national correspondent for The Atlantic Ta-Nehisi Coates.

The first panel, comprised of Mendoza; Carol Anderson, professor and chair of the African-American studies department at Emory University;and award-winning journalist Jenni Monet, was moderated by ProPublica senior reporter Ginger Thompson. The panel discussed the state of affairs of civil and human rights in 2019 and journalists’ responsibility in reporting those issues.

According to Monet, one of the most important aspects of covering events in a thorough and analytical manner is ensuring newsroom diversity so that there are more nuanced stories being brought to news outlets She cited one of her own experiences covering press events for the presidential candidate and Massachusetts Senator Elizabeth Warren, who felt that in-depth questions were not asked from journalists who represented the views of Native Americans. Warren has recently been embroiled in a controversy because she had claimed Native American lineage.

“You don’t need to be indigenous to write the indigenous narrative. There are many examples of that; an indigenous journalist is just more likely to see stories that others aren’t,” Monet said. “It’s not what you are seeing around Indian country; it’s what you’re not seeing.”

Mendoza said that it is the responsibility of journalists to present stories in a manner that allows the readership to interpret them regardless of its personal views. She stated that to write this way, journalists should have more in-depth conversations with people with opposing views.

Mendoza noted how, while covering the 2016 presidential election and then-candidate Donald Trump’s events, ralliers reacted to her in an often vitriolic manner, cursing her out and refusing to speak with her. Despite these personal affronts, she still made an ardent effort to engage with Trump supporters in order to understand their frustrations.

“When I used to get flipped off or told to go to hell, I have since sat down and had very long conversations with Trump supporters to really get to what they’re so upset about,” Mendoza said. “I really want to understand. I think we listen to listen more.”

In the second panel, Coates; Hunter-Gault; and Jelani Cobb, Journalism School professor and The New Yorker staff wwriter discussed the media’s branding as an “enemy of the people” and objectivity in journalism.

Coates questioned a journalist’s ability to remain objective if, as he felt, one side is blatantly lying and not allowing the media to serve as a check on politics and governmental institutions.

“For a society to function, you need a referee. Part of the problem now is that there’s a political attack on refereeing in general,” Coates said. “So how do you have these conversations without people assaulting these institutions themselves?”

In response, Hunter-Gault noted that despite these obstacles, there are many journalists still fulfilling those roles. She believes a journalist’s role is not to criticize, but to understand where people are coming from. Hunter-Gault proceeded to share an anecdote about her time covering the apartheid in South Africa, where she interviewed victims of apartheid who were people of color, but also those who were oppressing them and who believed that segregation was right.

Hunter-Gault recounted an instance in which she went to a party with her then-editor to see how people who supported apartheid interacted with one another. She was not considered “black” in South Africa and subsequently became privy to a set of jokes which were racially charged and used derogatory language. Hunter-Gault ultimately ended up leaving because her editor began to partake in those jokes, but chose not to interfere or speak out due to her role as a journalist.

“I said to myself that I’m here to cover this story. I’m also black, I’m also sensitive to what’s going on in here, and I can’t sit still for this,” Hunter-Gault said. “But I don’t want to mess up my story because what I’m trying to have the American people and anybody else who’s looking at my story understand.”