SGA candidates advocate for resources for LGBTQ students, students of color, and low-income students at forum

SGA candidates advocate for resources for LGBTQ students, students of color, and low-income students at forum 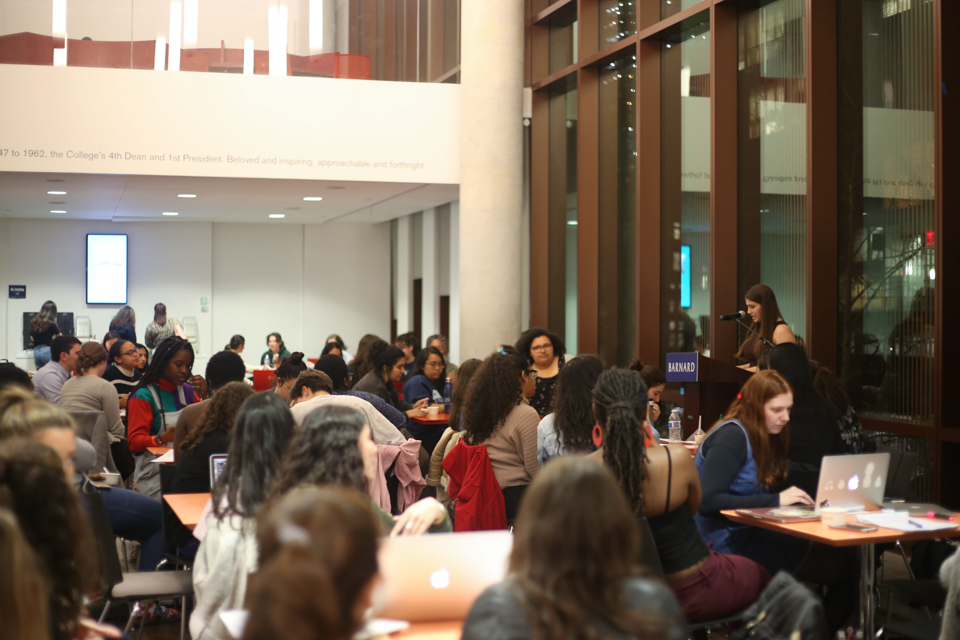 The forum, hosted by SGA to give students an opportunity to hear from candidates and ask them questions, was attended by over 50 students.

Candidates for Barnard’s Student Government Association presented platforms that advocated for increasing resources for low-income, queer, trans and non-binary students at the candidate forum on Tuesday.

The forum, hosted by SGA to give students an opportunity to hear from candidates and ask them questions, was attended by over 50 students.

The race for Vice President for Policy was the most contested, with three candidates each putting forth a distinctive platform for the role. The first, Emily Fahlsing, BC ’21, advocated for increased diversity in the Committee on Policy, which is overseen by the VP of Policy—but did not outline any specific plans for how she would engage a wider range of student voices. Fahlsing emphasized her lack of experience on SGA as an advantage, saying that she could leverage her outsider perspective to make SGA policies more accessible to the wider Barnard community.

Nathalie Kahn, BC, ’21, also running for VP of Policy, advocated for the circulation of maps highlighting accessibility information for campus buildings.. She also called attention to the need for improved testing spaces for students in need of accomodations, and for more specifically allocated spaces for cultural student groups.

The final candidate for VP of Policy, Idris O’Neill, is the only candidate with previous SGA experience, having served as the current Representative for Seven Sisters Relations and as a member of the Policy Committee. O’Neill advocated for increased awareness of trans-student access to health services, specifically by providing Furman counselors with training specific to serving the needs of trans students.

Many candidates cited the need to increase resources for queer, trans, and non-binary students, and pushed for more transparent information about existing resources.

Both Christina Juste, BC ’22, and Ellen Alt, BC ’21, who are competing for Representative for Student Health Services, emphasized the need for more accessible resources for marginalized groups on campus. Juste suggested night walk-in hours at Primary Care, and proposed working with the new Director of the Office of Disability Services once they are hired to convey student needs, while Alt put forth a plan to make safe sex education on Barnard’s campus less heteronormative.

Candidate for the role of Representative for Seven Sisters Relations Mo Russell Leed, BC ’22, spoke about their doubt—when applying to Barnard as a non-binary student—over whether or not they would be accepted, since they do not identify as a woman. Leed said they wanted to host a town hall to discuss the role that gender-non-conforming and trans students play at Barnard, and use that student feedback to better their experience on campus.

Although most races were uncontested, every candidate still put forth passionate and substantive platforms, and many called for more students to run for SGA in the future. Tirzah Anderson, BC ’21, who is running uncontested for Vice President for Inclusion and Equity, encouraged students to vote for candidates with marginalized identities.

“I want to make sure that every [student], especially those of marginalized identities, feel heard,” Anderson said. “I want to encourage people to vote for underrepresented students for this election cycle, because that will ensure that these voices are heard at Barnard.”

Candidates also emphasized the need to provide long-term solutions in regard to issues of accessibility for first-generation, low-income students on campus.

Blossom Maduafokwa, BC ’22, who is running uncontested for Representative for Inclusive Initiatives, advocated for the provision of more resources to low-income students so that they can comfortably thrive on Barnard’s campus. Her platform, like that of candidate for Representative for Sustainable Initiatives Rachel Gates, BC ’21, cited collaboration with organizations and businesses in Harlem as a way of making the University a more inclusive space for those who aren’t affiliated with the institution. Gates named Harlem Grown, a community organization dedicated to sustainability, as a potential source of collaboration.

The role of Representative for Sustainable Initiatives had three new candidates competing for students’ votes this year. Pamela Brenner, BC ’21, advocated for compost in all dorms and buildings. Aastha Jain, BC ’21, emphasized the importance of approaching sustainability with an intersectional lens, and advocated for implementing long-term strategies for sustainability as opposed to performative gestures that don’t have a large, measurable impact.

“We resort to performative actions like bringing mugs to Milstein and recycling,” Jain said. “Although these things are both important, my long-term goal as Representative for Sustainable Initiatives would be to have each student leave Barnard with a multi-faceted, intersectional, and comprehensive understanding of what sustainability is, how it relates to what they’re learning, and how it can be incorporated into any work they do after graduating.”

Maya Gilbert, BC ’22, a candidate for Sophomore Class President, said her experience as a first-generation, low-income student is important for the perspective that she would bring to the SGA Board of Representatives. Audrey Pettit BC ’22, also running for Sophomore Class President, emphasized her experience working within SGA subcommittees and other programming committees on campus as qualifying her for this position. Pettit advocated for increased transparency regarding internship and job applications, and also proposed meeting with the Deans to work on lessening students’ workload during break.

Tina Gao, BC ’21, a candidate for the role of Vice President for Finance, advocated for changing the language used around finance and financial aid at Barnard to empower first-generation low-income students. Gao also cited her experience as the current Sophomore Class Vice President as a factor that qualifies her for the position, and thanked Maria Pasquali, SGA’s bookkeeper, for meeting with her and working with her to prepare her for the role.

Rachel Nordlicht, BC ’21, the current Vice President for Finance, is running again for the same position. Nordlicht argued that she is the only person on Barnard’s campus who is equipped to take on the role given the impending departure of the SGA bookkeeper, who handles nearly all the council’s finances; the candidate said she is the only person who is able to pass down everything she has learned to the new bookkeeper.

The role of Junior Class President was also contested. Norah Hassan, BC ’20, cited her extensive experience as Vice President for the Sophomore Class, listing some of her major successes in her current role as evidence that she would be able to feasibly implement the items on her platform. Hassan highlighted the work that she did to move the designated Muslim prayer space on campus from a small room in the basement of Milbank to a room in LeFrak, and if elected would plan to work closely with student groups on campus to help them get the kind of physical space on campus that they need and deserve.

The other candidate for Junior Class President Hadassa Trau, BC ’21, advocated for increasing resources for international students, particularly in terms of getting internships or jobs while on student visas. Trau also pushed for the implementation of a virtual counseling service, in order to make mental health accessible and easy to navigate for students with busy schedules.

Candidate for Vice President for Communications Yeliz Sezgin, BC ’21, who is currently Representative for Food and Dining for SGA, cited her experience implementing Halal Dining at Hewitt. Sezgin advocated for the creation of an SGA website to make information about clubs and SGA meetings more accessible to students, as well as for holding town halls about mental health. She also pushed for holding a fireside chat for students of marginalized identities to discuss with President Beilock how their identities affect their experience as Barnard students.

Elizabeth Wallach, BC ’20, also running for Vice President for Communications, has no prior history working for or with SGA. Wallach advocated making use of alumni networks to broaden the social network accessible at Barnard. She also advocated for town halls to discuss the coexistence of different faith groups and identities on campus.

The roles of Representative for Information and Technology and Vice President for the Junior Class will remain unfilled. Applications for this position will be made available in the fall.

Voting will open at 10 a.m. on April 10 on the myBarnard website.