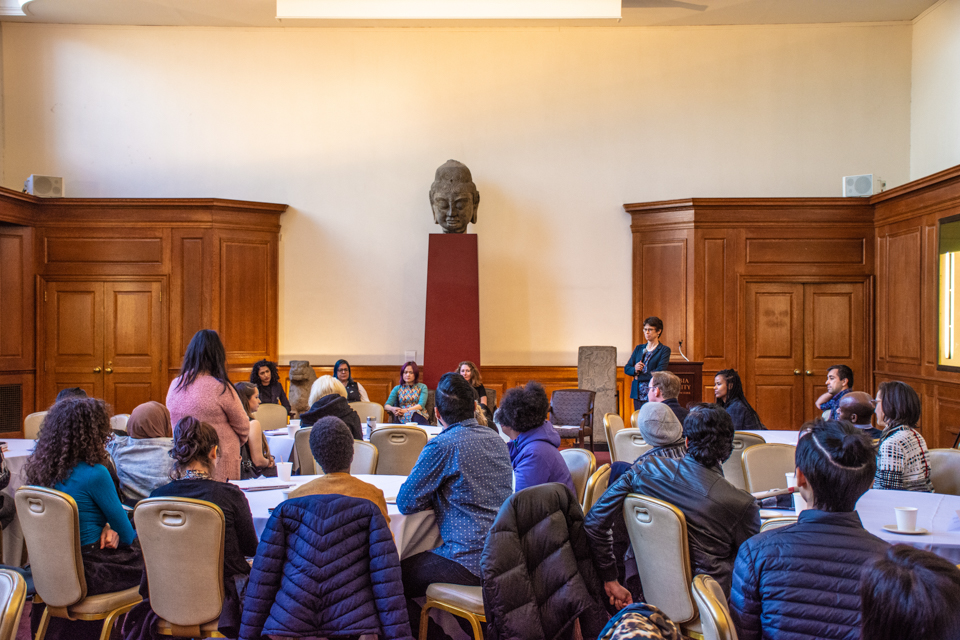 Members of the inaugural class of the Obama Foundation Scholars discussed active citizenship and challenges they have faced in their personal projects during a panel event in the Low Library Faculty Room on Wednesday.

The Obama Foundation Scholars Program, a partnership at Columbia with the larger Obama Foundation, selects 12 leaders to partake in learning opportunities at the University for an academic year. The program’s first scholars, who were announced last June, are part of Columbia World Projects, President Lee Bollinger’s initiative aimed at expanding Columbia’s global impact by connecting faculty research to finding solutions to real-world problems, such as climate change and food insecurity.

The panel event, called Citizen-Leaders: A Conversation with the Obama Foundation Scholars, featured four scholars and was moderated by Executive Vice President for University Life, Suzanne Goldberg. Undergraduate and graduate students were in attendance, as well as six other scholars.

The panelists began by describing their own work and the challenges they faced along the way, finding common ground in their determination working toward a goal despite being questioned by political bodies and even their own community.

Hoang had the audience imagine what it would be like working in her place, shedding light on the intricacies of advocating for environmental policies in areas stricken by poverty.

“Imagine that you are in a country of 96 million that just got out of war: I’ve lived through war, I’ve lived through hunger. Everyone wants to change their lives, get better, get food on the table,” Hoang said. “So, when you say, ‘Hey, let’s protect the forests,’ or, ‘The rhinos are dying, the elephants are dying, the ocean is polluted,’ they say, ‘Hey, these people are still hungry and poor, why do you still care about the whales dying from plastic in Thailand?’ They question you about your own motive.”

The discussion soon shifted, however, to the people and communities the panelists work for. Shetty stressed the importance of engaging and remembering the local and global communities, even while studying at Columbia, in order to be an active citizen.

“Because we have proximity to our communities, we know that being here as an Obama Foundation Scholar is amazing, but what got us here? Our work on the ground,” Shetty said. “What are we fighting for? That community and those people.”

Barbe, who recalled examples where people doing humanitarian work would refer to people in communities as “mine,” spoke against the tendency to focus on ourselves as saviors when we do good deeds.

“We need to stop considering ourselves heroes,” Barbe said. “We’re not the heroes here, it’s about the other people, and I think the students today at Columbia know who can speak out about discrimination, global warming, sexism.”

The panelists often spoke on combating the interests of political and economic systems of power, but ultimately challenged individuals and communities to improve and persevere with outreach and activism.

Gonzalez-Forero emphasized the need to have the courage to listen to difficult truths and be able to openly discuss problems.

“The one thing that strikes us more than anything is the lack of courage of other people,” Gonzalez-Forero said. “I think active citizenship is about beating self-doubt. You just have to take the risk, take the chance. Speaking up is not enough, do something.”