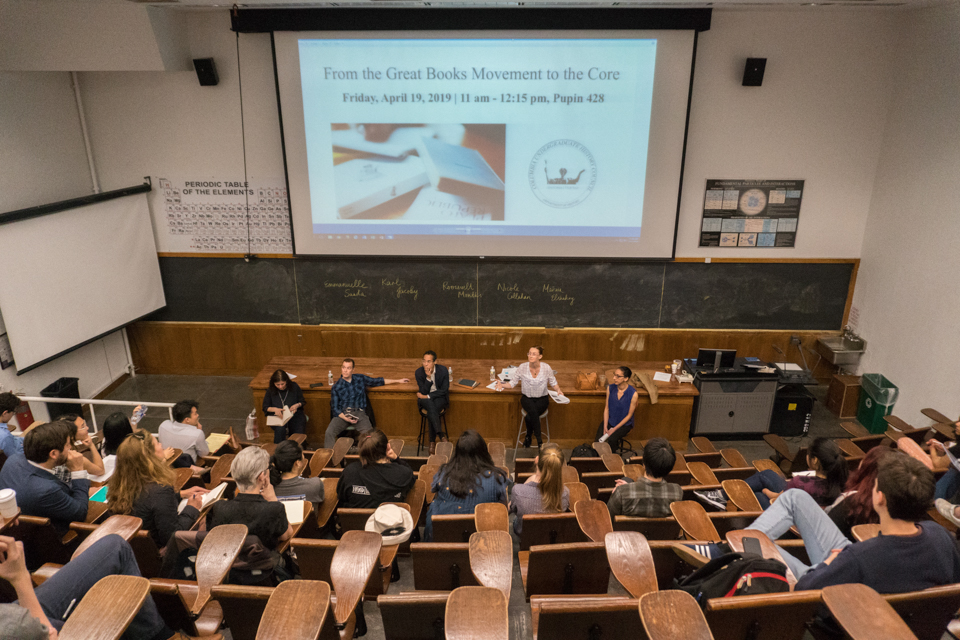 The event was put together to engage in a discussion on Columbia’s history and its relationship with the evolution of the Core curriculum.

A panel of professors discussed a century of history of the Core Curriculum, addressing student concerns over lack of diversity in its curriculum and faculty in an event titled From the Great Books Movement to the Core on Friday.

The Core Curriculum, comprised of classes such as Contemporary Civilization, Literature Humanities, University Writing, Art Humanities, Music Humanities, and Frontiers of Science, is a set of common courses that all undergraduate students at Columbia College and General Studies must take during their time at Columbia. Students at the School of Engineering and Applied Science must complete a separate set of core requirements.

Established in 1919, Contemporary Civilization was the first aspect of the Core Curriculum. Created in the aftermath of First World War, the purpose of the course was for students to discuss contemporary problems and critically analyze a traditional framework. Columbia is the only Ivy League school that still has a common curriculum for a large portion of its undergraduates.

Last December, questions surrounding diversity of authors and texts available in the Core Curriculum reached a new height when Julian von Abele, CC ’21, harassed a group of predominantly black students with a white supremacist tirade. Currently, a series hosted by the Office of Multicultural Affairs titled Respecting Ourselves and Others Through Empathy & Dialogue, is attempting to offer mediated conversations surrounding students concerns with the Core Curriculum. ROOTED has been conducted by OMA for many years.

The event was put together to engage in a discussion on Columbia’s history and its relationship with the evolution of the Core curriculum. In her opening statements to the audience, Saada specifically addressed some of the recent controversy surrounding the Core and whether it is representative of a diverse range of viewpoints. She framed the start of the discussion with two main questions: the first addressing Columbia’s institutional history with racism and the second regarding the Core’s syllabi.

However, she went on to state that many of these critiques stem from a misunderstanding of the construction of the syllabus in courses such as Contemporary Civilization and Literature Humanities, citing the inclusion of the Quran in 1995 as an example of the syllabus adapting as time passes to allow for diversity.

“I have read and heard that some of the texts on the syllabus are last minute add-ons to assuage white guilt and disgruntled students on campus,” Saada said. “That is a misunderstanding of what we do on the syllabus which reflects debates, constant debates such as the types that occur on campus or across New York.”

During the question and answer portion of the event, multiple students questioned whether there was a way to remedy what appears to be a Western bias and/or racism present in the curriculum without making any radical changes since its inception.

Montás responded that in part, this criticism is remedied by a continual reevaluation of the curriculum, as it allows for change in accordance with generational adaptations. However, in terms of the construction of Core syllabi, he also added that including what all faculty consider as every critical thinker or critical text is impossible.

Further, he stated that part of this reevaluation and creation is to come up with a more comprehensive and updated syllabus. The Core Curriculum is reevaluated every three years; the last reconsideration of the curriculum was in 2018.

“When it comes to the material, whatever choices that we make are going to leave a lot out, and are going to be correctly open to criticism,” Montás said. “This is why it’s so hard for faculty to agree to that, you immediately open yourself up to being criticized, and in some ways it’s indefensible. You can’t get everything in there.”

Callahan mentioned how it is possible to try and push back on racist or outdated points of view within the framework of the current curriculum.

“It’s impossible to know a lot of the personal politics of the framers of CC,” Callahan said. “But to see the project of CC as trying to encounter those racist, anti-Semitic beliefs and push back at them I think is really important. There are very problematic histories of the people who founded CC, but I think there is a way to try and separate the ideologies and the methodologies.”

One student also questioned whether diversity among faculty teaching the Core affects student perceptions of the curriculum’s diversity. Montás responded that while he is hesitant in quantifying diversity in terms of just ethnicity, a lack of representation within Core faculty mirrors the lack of diversity among faculty at Columbia and across its peer institutions. He attributed part of this lack of Core faculty diversity to the already burdensome work for faculty of color at the university, who often have to serve multiple roles in addition to being professors, such as informal student mentors.

Throughout the event, Elshakry emphasized the importance of student voices in shaping the dialogue of what is included on Core Curriculum syllabi, as well as how the courses are taught.