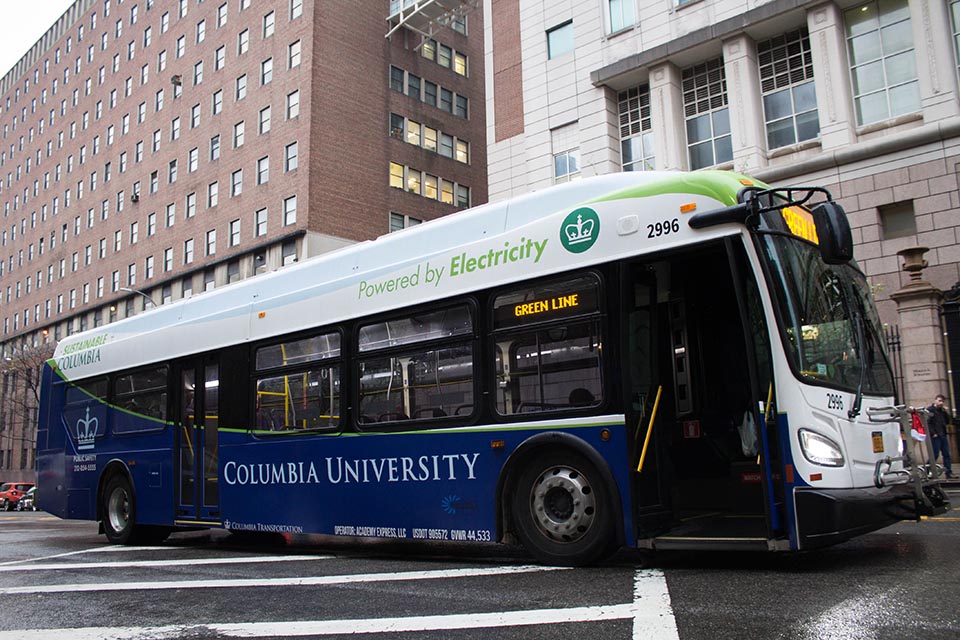 This Earth Day, the University released its second Sustainable Columbia Annual Progress Report since it launched its Sustainability Plan in 2017. The report details progress updates and statistics for areas of development, including greenhouse gas and energy, transportation, and waste.

Here are six key points to help wrap your head around what’s new.

1. The University achieved “100 percent zero emissions” in regards to renewable electricity in 2018.

According to the report, this feat was aided significantly by the purchasing of renewable energy certificates (RECs), mainly in the form of wind power to supplement the city’s pre-existing solar and hydropower. RECs are acquired via investments in renewable energy to compensate for other emissions within the University itself.

This particular statistic accounts for the Morningside, Manhattanville, Medical Center, and Lamont-Doherty campuses.

It should be noted, however, that the “zero emissions” only account for offsetting emissions generated by electricity, and not for all generated emissions. Regardless, this achievement is a notable step in accounting for all emissions and the potential for complete carbon neutrality.

2. Columbia has exceeded its target emissions reductions for 2020—with a catch.

According to reported data, the University reduced emissions by 47 percent, surpassing its 2017 target of a 35 percent absolute greenhouse gas emissions reduction by 2020.

The catch is that this target reduction was calculated from baseline data levels gathered in 2006, 11 years prior to the announcement of the Sustainability Plan. During these 11 years, reductions were already being made, calling into question how impressive this statistic actually is.

Despite this, Columbia is still working towards aligning with New York City’s goal of reducing all greenhouse gas emissions by 80 percent by 2050, a goal that many students feel is not ambitious enough.

On the other hand, Sir Alex Halliday, director of the Earth Institute, noted that the University still has much to do in terms of fixing heating and cooling infrastructure to be better prepared for future emissions reductions.

3. Waste diversion rate from landfills has decreased, though only marginally.

Waste management and mitigation have been main focuses of Sustainable Columbia’s goals since its formation. A pie chart from last year’s report indicated that there was a 16 percent waste diversion rate from landfill calculated for “2017 campus academic buildings,” which indicates how much waste is diverted to recycling.

This year’s report, however, indicates only a 13.6 percent waste diversion rate from landfill for “2018 Morningside campus academic buildings.” This data, despite the expanded campus scope of the progress report, was only for the Morningside campus.

According to the report, the differences are accounted for by a reduction of recycling streams despite a constant landfill volume. However, the report interpreted the data as a sign that it “supports Columbia’s goal to minimize waste generation at the source.”

Some of this decreased percentage can be attributed to factors such as the donation of furniture to the Reuse Network, a network that connects places like universities to provide surplus equipment to charities.

Already having deployed a fleet of six electric-battery intercampus shuttles in July of last year, as well as several hybrid vehicles for Public Safety, the University is continuing to improve the sustainability of its transportation.

Most notably, the progress report claims the University is on track to incorporate new guidelines into Columbia’s vehicle purchasing policy that would add a new online tool for fleet managers, enabling them to utilize vehicles more suited to reducing greenhouse gas emissions and pollution from manufacturing.

Columbia was also ranked first in transportation by the Association for the Advancement of Sustainability in Higher Education, which took note of the sustainable vehicle options and “bicycle-friendly amenities.”

5. Two campuses, the Irving Medical and Lamont-Doherty campuses, were newly added to the report.

In the 2017 Sustainability Plan, it was stated that “the primary focus is the environmental sustainability of the Morningside campus operations. Moving forward, Columbia will continue to work together with its campuses at the Medical Center and Lamont-Doherty Earth Observatory.” Columbia has made good on their promise here, reporting extensive data and showing significant progress at both locations.

With these new additions, the report included data from two new solar energy farms constructed in 2017 for the Lamont-Doherty campus, which “produced roughly 40 percent of the amount of electricity expected in the future for an entire year” on the campus.

Unlike the 2006 baseline data from the Morningside campus, many of the energy and waste goals established for Lamont-Doherty are based on data levels from 2016 and 2017.

6. Carbon neutrality is still on the horizon, though few specifics have been announced.

The plan to incorporate carbon neutrality in an upcoming 2020 plan still seems to hold strong. After Columbia for Carbon Neutrality, a student initiative, began pushing the University to commit to net zero carbon emissions by 2030, carbon neutrality has been a central talking point of sustainability on campus.

Although the phrase “carbon neutral” is only mentioned once in the entire progress report, plans are acknowledged to be on the way.

The report’s introduction states that the University will “begin to prepare our roadmap for becoming operationally carbon neutral.” The achievement of 100 percent zero emissions renewable electricity was recognized as a key stepping stone towards this goal, but no commitment date or any further details were revealed.