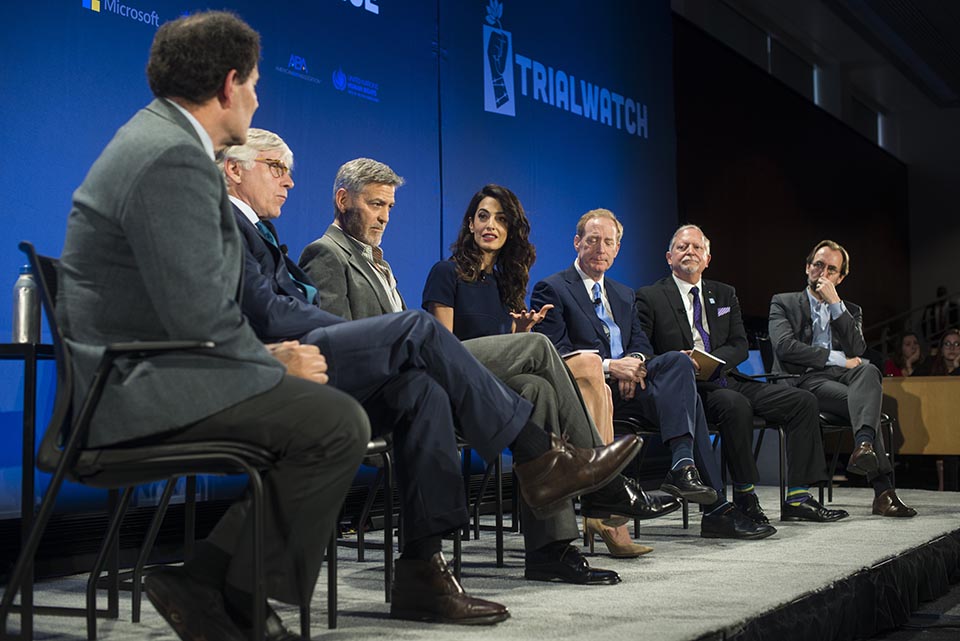 Founders of the Clooney Foundation for Justice, George and Amal Clooney, unveiled TrialWatch, an initiative focused on monitoring and reporting on trials around the world that pose a high risk of human rights violations, at Columbia Law School on Thursday.

In partnership with institutions including Columbia Law School, the Clooney Foundation plans to recruit and train “trial monitors” to observe and report on criminal trials around the world with the goal of exposing injustice. TrialWatch will focus on trials involving journalists, LGBTQ people, women and girls, religious minorities, and human rights defenders. The initiative also intends to collaborate with students, journalists, and lawyers across the world; Columbia’s partnership specifically includes open fellowship positions for law students to design and implement projects for TrialWatch.

“Without the fair administration of justice, it is not possible to hold the powerful to account,” Ms. Clooney said. “There can be no democracy, no freedom of speech, no safety for minorities. And yet, we measure corruption by governments, and not by courts. We monitor the fairness of elections, but not trials. Leaders accused of holding prisoners can get away all too easily with bare denials or stock answers about separation of powers.”

The information collected by trial monitors will be analyzed by experts in the American Bar Association, who will then create a global justice index which, the Clooneys argued, can be used to shame the states actively violating human rights as well as pressure other states or businesses to cease supporting those states.

Al Hussein added that in collaboration with the media and universities, the information provided by TrialWatch can draw attention to conversations that aren’t currently happening in the open.

“We live in a world where there is a cacophony of sound. You log on, you switch on, you pick up your handheld and it’s just constant sound. It screens us from a dangerous silence that exists, and that silence is at the level of head of state in government,” Al Hussein said. “They don’t call each other out. … Not just the [UN Secretary General]; I mean all of the prime ministers and presidents.”

Citing Columbia’s collaboration with the initiative, Bollinger said that in places where governments are not fulfilling their duties to uphold human rights, it is the responsibility of other institutions, such as universities, to fill the void. He emphasized that universities must take on the responsibility as a “clinic” to partner with outside organizations to unite scholarly research with real-world problems and find solutions.

“We live in a world where increasingly you can’t rely on governments to do the things that the people in this panel and in this room probably unanimously believe really must happen,” Bollinger said. “We have to have the University as a clinic … actively trying to take the things we do best, which is scholarship and teaching … to bring about a change. There is a void in the world that has to be filled by institutions other than the government.”

Smith expressed excitement around the technologies, and specifically the TrialWatch app, that would enable trial monitors to collect data, and thereby better the world.

“This is a time where people in institutions and businesses need to find the courage to frankly make some statements that shouldn’t require that much courage to make,” Smith said. “This can shine a light and enable the world to see what’s going on.”