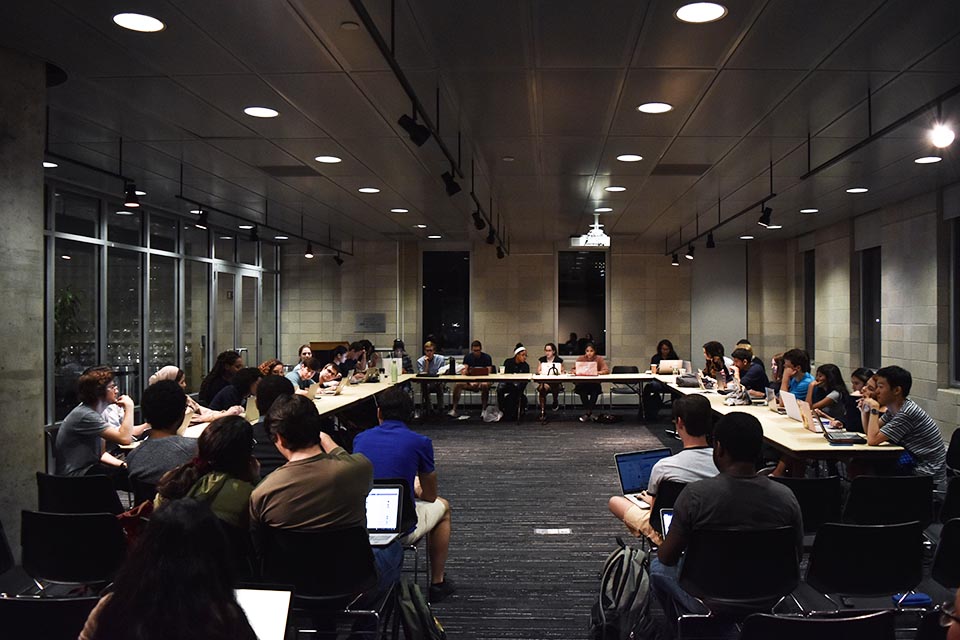 During a packed last meeting of the semester, the Columbia College Student Council discussed the implementation of procedures to remove ineffective representatives, potential changes to club funding allocation based on measures of inclusivity, and the creation of a Bacchanal Governing Board that would include the undergraduate councils in financial decisions made by the Bacchanal Committee.

The Governing Board will be composed of the student body president and vice president of finance of each of the four undergraduate councils, and one of the two Bacchanal co-presidents and Bacchanal finance chair. The Bacchanal Committee would present the BGB with a short list of artists and prices by the fall following results from a student survey, which will solicit feedback from the student body on the previous concert and preferences for the following concert, such as the number and genre of artists.

The council voted to approve the creation of the Bacchanal Governing Board under the Bacchanal Governance Document, which has already been signed by the two Bacchanal co-presidents. The Bacchanal Committee would still have autonomy over the final decision of the performers so long as they come from the a short list approved by the BGB. Earlier drafts, presented at the last CCSC and Barnard Student Government Association meetings, faced significant criticism for requiring the entire board’s approval for concert lineups and any decisions regarding Bacchanal procedures.

“As an e-board, we’ve discussed and we’re pretty happy with the changes because it enables Bacchanal to still maintain a sense of autonomy,” Emma Schechter, CC ’20 and co-president of Bacchanal Committee, said.

The BGB and Bacchanal Committee would be able to increase allocated funds to make an offer to an artist whose fee is out of the initial allocated price range. The BGB will also increase funding to Bacchanal Committee’s Facilities and Securities allocation and its baseline artist budget by 2-3 percent each year.

Also at the meeting, Monique Harman, CC ’19 and student services representative, resigned following the recently failed impeachment vote brought against Henry Feldman, CC ’21 and VP for policy-elect. In her statement, read by Elise Fuller due to Harman’s absence, she also cited former iterations of the BGB as limiting the abilities of the Bacchanal Committee.

“After a meeting that denigrated and invalidated the feelings of Heven and Bacchanal, a predominantly black student group, only to then have that same body turn around a sign a petition condemning anti-blackness in the most disgusting display of performative allyship I have ever seen, I have also decided to resign upon the completion of my tenure of the CCSC,” Harman wrote.

In an effort to address disparities in commitment among representatives, class representative Joshua Elias, CC ’20, proposed implementing bylaws that would ensure accountability of members and enforce processes to remove ineffective council members. Members discussed using the amendment as a way to formalize accountability within the council’s bylaws.

“We don’t have anything that is holding people accountable at the moment. We’ve been quite lenient. Last semester, we ran into some issues with how lenient we’ve been, in allowing people to get to the point of literally the end of the semester having completed absolutely nothing,” Fuller said.

After a contentious period of elections and resignations, however, some members expressed worries of the removal process being used for personal reasons.

“I’m worried about this being used for less noble intentions. I’m just worried about bias, and I’m worried about people taking out vendettas through this. I hope that if we move forward with this there’s some way of checking that,” Zachary Kimmel, CC ’21 and academic affairs representative, said.

Members discussed ways to create oversight and transparency should this amendment be instituted. Ideas discussed included recommending that ineffective members be recommended to resign or implementing a formal system evaluating the council members’ yearly performance. The vote to enact this amendment will be tabled until next semester.

The council also discussed creating a rubric to evaluate the inclusivity of student groups in order to determine eligibility for student group funding. The rubric places student groups into four categories to determine fund allocation—category one being the most inclusive and category four the least inclusive. Category one groups will be the only groups eligible for CCSC cosponsorships, while category four groups will be ineligible for CIF grants, student project grants, CC travel funds, and JCCC emergency funding with the exception of open, on-campus events.

“The question is, well, should we be investing our limited additional funds into groups that are only benefiting very few people when those same funds could go to an event that like 200 people show up to and have a really great time? So I think that’s the philosophical question we’re addressing,” Adam Resheff, CC ’19 and VP for finance said.

This process will only apply to governing board-recognized student groups—groups will be notified of their category within the first month of school with the possibility to appeal the decision.

However, the guidelines were not voted on as funding and club inclusivity is already broadly addressed in the council’s constitution, wherein funds are in part determined by the ratio of students from undergraduate schools who participate in the organization.