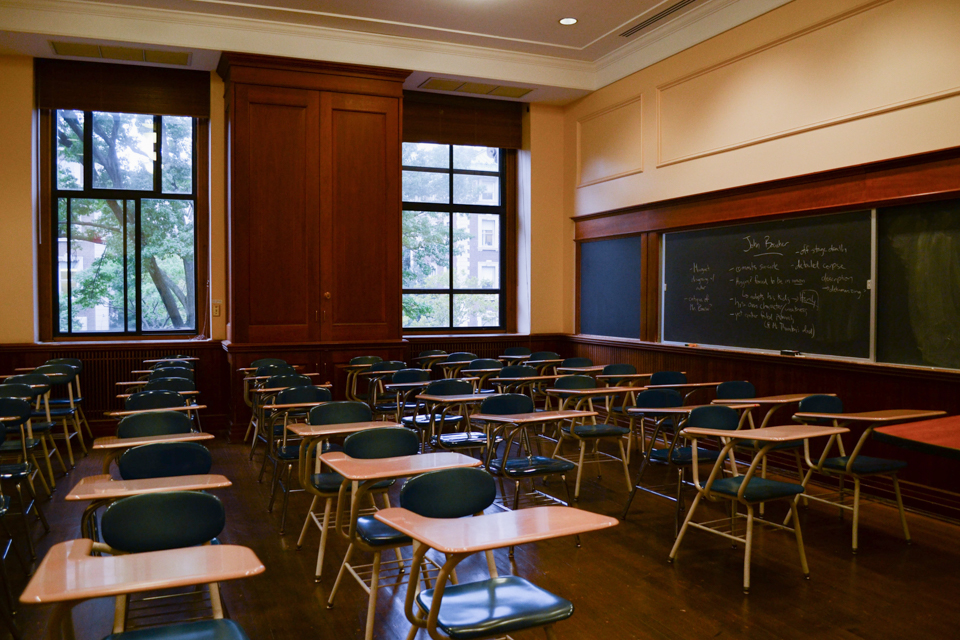 In response to students’ actions, faculty on both campuses have chosen to use the classroom as a means to address what happened in Milstein.

When footage of Barnard Public Safety officers pinning Alexander McNab, CC ’19, to the countertop of Peet's Coffee in the Milstein Center for Teaching and Learning went viral, administrators responded to student outrage by holding open forums, releasing carefully crafted statements, and creating the Barnard Community Safety Group. In the aftermath of the incident, as students have sought more avenues for open dialogue, the need to discuss racial profiling and policing on campus spilled over into the classroom and into the hands of Columbia and Barnard faculty.

In the days following the incident, Barnard students surrounded Barnard’s Public Safety office in protest of the actions of Barnard Public Safety, and student protesters stood outside John Jay Lounge to demand the recognition of racialized policing. Students also gathered on Low Steps the following Sunday to demand administrative action be taken to combat racist incidents on campus and re-center the voices of black students.

In response to students’ actions, faculty on both campuses have chosen to use the classroom as a means to address what happened in Milstein, either through direct discussion or by contextualizing the incident within recent historical trends. Though methods varied, one common thread persisted throughout : The incident has re-opened a campus discussion about racism, turning classrooms into spaces where students can discuss racial profiling and its consequences on campus.

Some professors addressed student concerns by prioritizing conversations on how the themes of social movements and racial hierarchies are exemplified by the incident and what ensued afterward.

Columbia Law School professor Bernard Harcourt was particularly distraught when he initially found out about the incident, later citing conversations that occurred among faculty soon after to find ways to address what happened.

“When I heard of the incident and then watched the video, I was distraught and deeply alarmed, and concerned and deeply saddened that our students were experiencing these things,” Harcourt said.

Harcourt emphasized the need to strike a balance between facilitating productive and sensitive conversations and ignoring issues out of fear of being too harsh.

“I teach courses and seminars like Just Societies and Powers. Events that happen on our own campus are necessarily part of the whole conversation, and we do try to have productive and healthy conversations that leave the students in a better position,” Harcourt said. “That’s always a problem with addressing head-on these problems, but to deal with it with denial is more harmful.”

For Barnard sociology professor Marnie Brady, the questions raised by this incident relate to subject matter in the classes she teaches, especially regarding how essential student experiences are in understanding different perspectives. She teaches two seminars this semester, Communities and Social Change, and People, Power and Protest.

“Faculty certainly do have a place in valuing students’ lived experience as contributing to the perspectives that we want in our classrooms that are part of our learning. And in my courses, the questions released by this incident relate very much to the subject of the classes,” Brady said.

School of Social Work professor Vincent Schiraldi, who was the Commissioner of the New York City Department of Probation and Director of Juvenile Corrections in the District of Columbia, cited how reactions to what happened to McNab reflect broader trends in which interactions with police repeatedly remind black students of systemic racism present in all institutions.

“It’s one more reminder about how young men of color have a worse deal at the hands of the system and are viewed with more suspicion and sort of starts at police contact—it’s magnified at every stage,” Schiraldi said.

In his own class, Schiraldi said he has noticed students having difficulty engaging in classes that deal actively with questions of race on campus because, for students of color, these class discussions are a reminder of the discrimination they face on a daily basis.

“Research shows that when there’s homicides in a neighborhood, even if they haven’t witnessed it and just heard about it, young people do worse in class,” Schiraldi said. “Clearly it isn’t of the same magnitude, even though it is awful, but I think it has a profound impact on our ability to educate people, particularly young men of color, because if you have to be hypervigilant in your daily activities it’s hard to learn.”

In her class discussions following footage of the incident going viral, Brady expressed how it was pertinent to question our conceptions of security and safety and to help students mobilize around these issues.

“I thought it was important to create space to think about this incident in relation to historical context, to different theoretical, explanatory perspectives,” Brady said. “It’s important to raise questions on what does it mean to feel safe, what does it mean to feel secure, how do we operationalize that in a way that can involve the multiple stakeholders which are part of the campus community?”

English professor and Head of the Department of African American and African Diaspora Studies Farrah Griffin said she did not directly bring up the incident in the classroom. However, she cited the dialogue around the issue as a reason to increasingly engage with historical issues of race and institutional racism in the classroom on a regular basis.

Both the incident and the student protests that mirror a recent string of anti-black incidents on or near Ivy League campuses in the past year. A black student at Cornell was beaten by other students in a racially-motivated attack last year. Multiple police shootings around Yale have led to almost a week of student protests around systemic racism. Last December, Julian von Abele, CC ’21, harassed a group of predominantly black students outside of Butler Library, and, later that month, an unknown perpetrator vandalized Carman Hall by tearing down and placing a vent marked with an anti-black slur outside a black student’s dorm.

While in the past Griffin saw many students coming to her concerned about bias-related incidents on campus, this time, she did not experience the same need to provide emotional support. Rather, she saw students wanting to engage in active dialogue.

“They were very upset about [what happened] but recognized that this wasn’t happening in a vacuum,” Griffin said. “The issues reflected here are issues we discuss all the time. It’s provided a historical and cultural context. It has a long history, they have a real context for understanding it, and recognizing it as not a one-off event.”

Harcourt reiterated the need for unrelenting work needed to generate actual change within the Columbia community.

“We all bear a collective responsibility for our community and that we should never be satisfied with what we’re doing, particularly in light of what happened,” Harcourt said. “The anti-racism struggle and work of reparation needs to be in everything we do, and there aren’t going to be any quick fixes or easy solutions. It has to be something we all prioritize.”