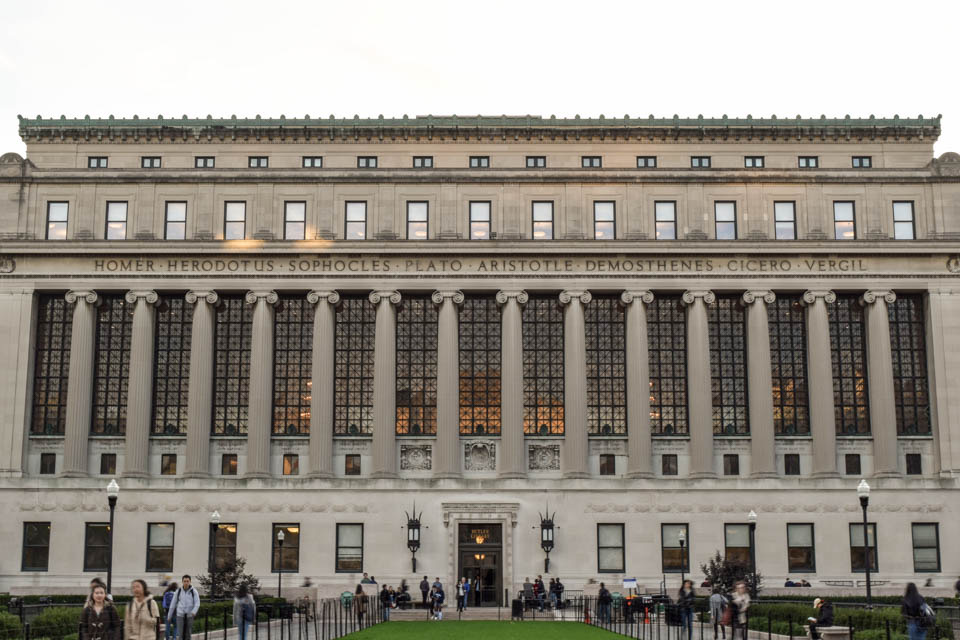 The seminar Columbia University and Slavery was first taught in spring 2015 by history professor Eric Foner, a Pulitzer Prize-winning historian.

Students presented independent research findings on Columbia University’s ties to slavery and the slave trade on Wednesday, marking the fifth year of the Columbia University and Slavery project, a seminar offered every spring. At the event, professor Thai Jones, who now teaches the seminar, discussed and displayed recommendations requested by University President Lee Bollinger in light of the research done this semester.

The seminar Columbia University and Slavery was first taught in spring 2015 by history professor Eric Foner, a Pulitzer Prize-winning historian. Foner initially compiled the work of undergraduate research as well as his own research, releasing a preliminary report in 2015 on Columbia’s extensive history of ties to slavery and the slave industry.

The report was presented to Bollinger at the end of the course’s first semester for discussion. As a result of these discussions, Bollinger initiated the Columbia University and Slavery project in 2017, to allow for further research on Columbia and slavery to be conducted by both undergraduates and faculty.

The result of the ongoing project is a website where the faculty and undergraduates’ research, largely produced through the seminar, is published. The project aims to draw on further research conducted by faculty and students and contribute to public understanding of the role slavery has played in American history, offering an example to other institutions of higher learning as they pursue their own investigations.

At the event, Nolen Scruggs, CC ’19, presented his research on the funding for Havemeyer Hall, which, according to his research, came from notable members of the Havemeyer family integral to the notorious American Sugar Refining Company. The company was the largest American manufacturer of sugar in the 19th century, and had interests in the Caribbean and Puerto Rico.

“As it stands today, Havemeyer Hall is directly tied to slave labor of sugar, and the connections that New York City and the Northeast have had to slavery since pretty much its inception,” Scruggs said.

Another student presenter, Devin Barricklow, CC ’19, focused her research on the way that Spectator has portrayed and covered issues related to slavery in its archives. Going as far back as the first accessible archives in the 1890s, Barricklow found that Spectator rarely mentioned slavery as connected to Columbia.

“Most of the mentions of slavery didn’t have to do with the actual institution,” Barricklow said. “And I kind of wanted to trace why that was and get the history of discourse surrounding slavery on campus.”

The course meets with Bollinger nearly every year to discuss students’ findings. This semester's research findings are the basis for the list of recommendations requested by Bollinger at their meeting this year. Recommendations include the renaming of buildings such as Havemeyer Hall, Butler Library, and Hamilton Hall, and the addition of black names onto Butler Library.

Recommendations also include the removal of the statue of Thomas Jefferson, which is currently installed in front of Pulitzer Hall. The statue, according to the recommendation, should be replaced by notable black figures affiliated with Columbia, such as Langston Hughes.

The recommendations also suggested the creation of an oversight committee related to Public Safety, NYPD, and incidents of racist violence. In an interview with Spectator, Jones also emphasized the incorporation of Columbia University and Slavery into the Core Curriculum. This recommendation comes following the physical confrontation of Alexander McNab, CC ‘19, on Barnard’s campus, which sparked questions about Public Safety’s ties to NYPD.

“The course has that political dimension and this year, students have been really engaged over questions around Public Safety and the incident at Barnard. It was definitely part of our conversation,” Jones said.

Jones and students also noted the challenges they faced in conducting their research, citing the fact that Columbia has moved its campus far more frequently than other universities with similar histories. Columbia’s original campus was adjoined to Trinity Church, in what is now lower Manhattan.

Jones also noted that many archival materials have been strategically destroyed to hide evidence of ties to slavery or removed altogether. Jones noted here the Philipse family collection—a wealthy, slave-owning family in New York City—who donated a personal collection to Columbia in the 1950s.

Jones noted that all information related to slavery had been redacted in the archives left by the Philipse family.

“The question of ‘at what point do people know to be embarrassed by this history?’ seems like an interesting historical question because [the Philipse] collection has all this documentation about stealing land from the Native American groups,” Jones said.

Correction: A previous version of this article misspelled a student’s name and mislocated the placement of the Thomas Jefferson statue. Spectator regrets these errors.