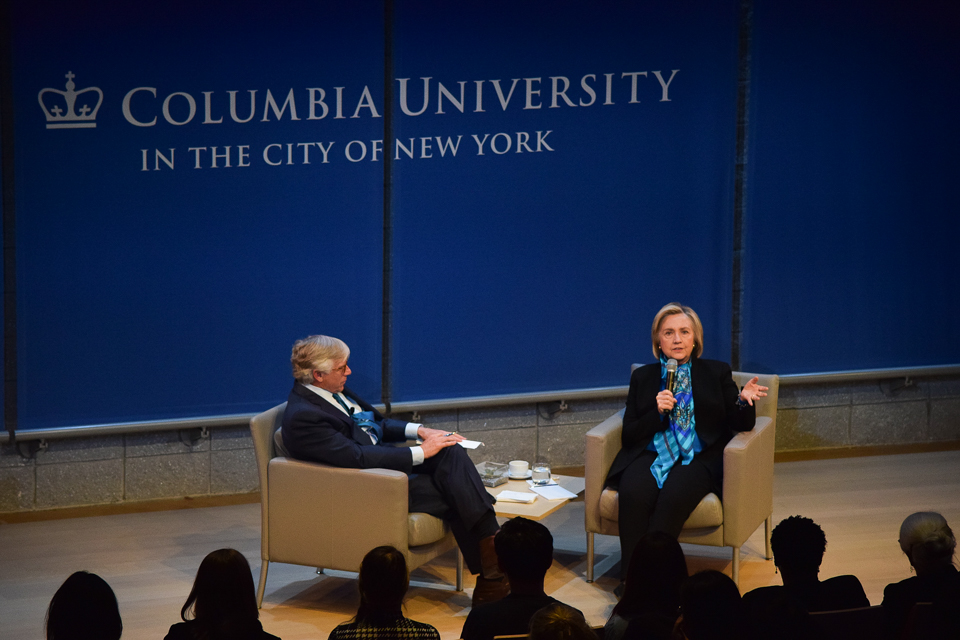 Hillary Clinton condemned Russian interference in global democracy during a wide-ranging interview with University President Lee Bollinger on Monday in which she urged young people to “stay awake” during the “dark and anti-progress, anti-rights” movement of the Trump administration.

Clinton and Bollinger spoke in front of over 400 students at the Forum, the third open building on Columbia’s Manhattanville campus—a 14-year and 6 billion dollar effort to secure new space for the University. The campus serves as the cornerstone of Bollinger’s presidency, with the Forum—a multipurpose venue that aims to host academic conferences, meetings, and symposia where leaders around the world come together to discuss ideas across different fields—as its centerpiece.

Clinton’s has spoken a number of times at Columbia and Barnard, most recently with New York Governor Andrew Cuomo to promote the Reproductive Health Act earlier this January. In 2017, a number of news outlets reported that Clinton was considering teaching at Columbia, though the rumors never materialized.

The interview also comes at a time of renewed debate and growing scrutiny over Russian interference in the 2016 election, during which the former secretary of state was defeated by President Donald Trump. A 448-page report by Robert S. Mueller III into the interference,released last month, detailed a number of findings, including attempts by the president to thwart Mueller’s investigation and a concerted effort by Russia to interfere with the election.

“It was no different than Watergate,” Clinton said of the Russian “meddling.” “Instead of bumbling burglars that the Nixon Whitehouse sent to steal information from Democrats in 1972 election, the Russians were doing it, the Russians were offering it constantly.” She also stated that Trump unequivocally “obstructed justice,” though the report found that there was insufficient evidence to establish that Trump engaged in criminal conspiracy.

In reference to the released components of the report, Clinton emphasized that threats to the tenants of democracy have changed significantly due to modern technology. Recent evidence of Russian influence have also pointed to infiltration of social media to spread anti-vaccination beliefs, and to propagate false rumors about the medical risks of fifth generation cellphones, which analysts say could provide nations with the key to a competitive edge for the century.

“They’d be happy to see a bunch of Americans to see their kids struggling with the impact of measles and struggling with this kind of discord...Maybe it’s just amusing to Putin to sit in the Kremlin and say, ‘How many Americans can we get not to vote for 5g?’”, Clinton quipped.

Clinton, whose political career has been painted by an advocacy for women’s rights, also tied modern political movements to the federal and national pullback on civil rights, labelling recent efforts to introduce anti-abortion legislation and to outlaw affirmative action as a “counterrevolution” to progress in the 1970’s.

“I think it is a direct threat to the extraordinary opening of opportunity and freedom to a vast majority of Americans who had otherwise been left out, both by law and custom,” Clinton said.

In contrast, Clinton pointed to the Warren Court period of the Supreme Court of the United States, both criticized and lauded as the highest point in judicial power that saw an end to racial segregation through the Brown v. Board of Education decision in 1954.

“There was so much bubbling, and the Warren Court began to give a voice in that. … Those times—if you were awake, paying attention—were so powerful,” Clinton said.

The Brown decision was considered largely unequivocal, even by the most conservative judges—including Justice Brett Kavanaugh, who referred to Brown as the “single greatest moment in Supreme Court History—for nearly 65 years. But since April 2018, more than two dozen of Trump’s executive and judicial nominees have declined to endorse or the decision, something Clinton said “stunned” her.

“[Decades of change] are at risk,” she said. “For all of those steps forward we were making, there was always an undertone, there were always people and those organizations that wanted to turn the clock back. … We have to convince people now because it’s not an interesting hypothetical. It's a potential reality.”

Clinton repeatedly warned against increasing threats to civil rights, decreasing importance of truth and facts, reversing progress made during her own formative years—the Brown decision in the 50s, protests over the Vietnam War in the 60s, and the fight for civil rights in the 70s.

Citing her own experience in the public, both as an activist and politician, and pointing to Bollinger’s public role in defending affirmative action, Clinton pointed to the need for younger movements and an urgent, and persistent, push for change.

“Your being involved in some way in the public sphere is going to be critically important for having the kind of future that your wanting to have...This is not just some theoretical threat to our way of life, our personal freedom and autonomy. I worry greatly about what could happen in the next 30 years.”