In their own words: Friends, family, and colleagues honor Peter Awn at ceremony

In their own words: Friends, family, and colleagues honor Peter Awn at ceremony 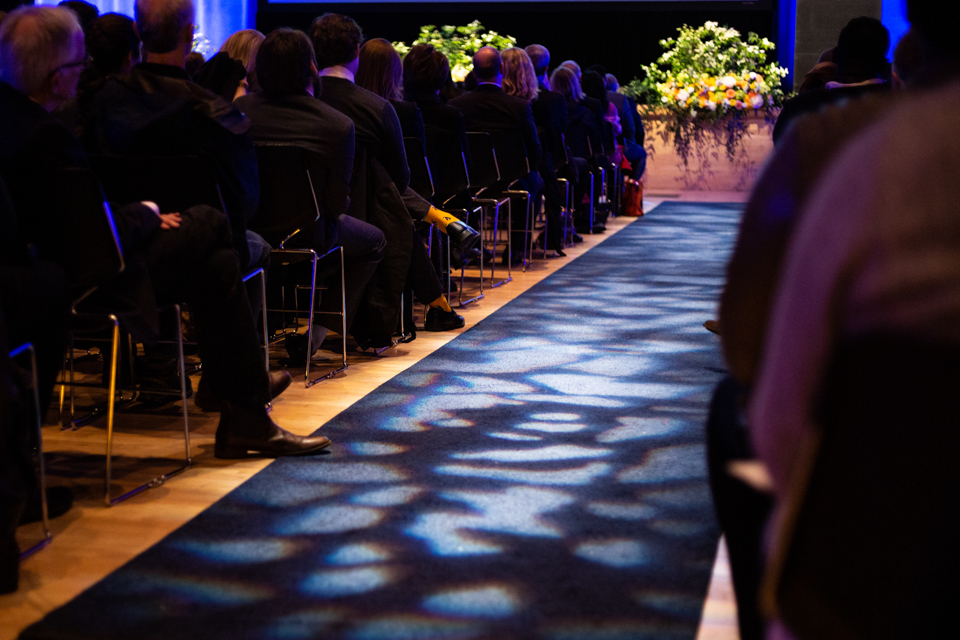 On Tuesday, hundreds filled Roone Arledge Auditorium in Lerner Hall for a service to celebrate the life of former Dean of the School of General Studies Peter Awn.

On Tuesday, hundreds filled Roone Arledge Auditorium in Lerner Hall for a service to celebrate the life of former Dean of the School of General Studies Peter Awn. One after another, administrators, professors, friends, and family members spoke in-depth on the many different ways in which Awn touched their lives.

Awn lived two separate lives: as “Uncle Pete” and “Rockstar Dean.” People from the two spheres came together for the first time to honor the same Peter.

Awn’s family and colleagues were introduced for the first time at the side of Awn’s hospital bed. Many sensed that Awn made the conscious decision to separate his family from his work life, keeping to his mindset that “It was never about him” but the people he dedicated his life to helping. On the day of Awn’s funeral, the large audience was a testament to his reputation as the best uncle, brother, teacher, mentor, dean, and friend that he could be.

“He knew the value of discussing The Iliad with a veteran and Medea with a mother of two.”

In his opening remarks, University President Lee Bollinger noted that Awn knew two things: GS students were unique, with a special set of talents informed by their non-traditional background, and all he had to do was “make everyone else in the world realize and appreciate that fact.”

Bollinger added that GS has contributed much to the richness of the University and that following the two decades of Awn’s tenure as dean, he was the greatest gift that GS has given to the Columbia community.

While speakers honored his influence as an administrator who transformed the school, they emphasized that this transformation was as a result of his commitment to students above all.

Awn was appointed to his position of dean of General Studies in 1997. Provost John Coatsworth noted that in his time, Awn incorporated the rigor of the Core Curriculum into GS, recruited more veterans than all peer institutions combined, and made GS the “go-to place of curricular innovation” with the implementation of dual B.A. and joint global programs—all innovations that brought students to the forefront of the institution.

After being ignored by his other colleagues, a professor remembers the two-hour lunch that welcomed him to the department as a junior faculty member.

As a new assistant professor, Najam Haider reached out to colleagues in the department of religion—many didn’t respond, while a few suggested he attend their office hours. But Awn invited him to lunch. The initial two hours Awn and Haider spent discussing Awn’s experience at Columbia and department gossip turned into monthly meetings over the next 10 years.

“We will miss him greatly, and on a personal level, I am heartbroken to have lost not only a generous colleague but a supportive friend,” Haider said.

In 2015, Haider took over Awn’s popular course on Islam. He remembers the disappointment a student expressed when realizing that Awn would not be teaching because Awn had taught her mother and her grandmother. While Haider was never Awn’s student, he said he clearly witnessed the commitment that Awn made to teaching.

“The quality and lasting influence of scholarship speaks for itself,” he added.

Dean Lisa Rosen-Metsch last saw Awn leaving Lewisohn Hall, where his presence has outlasted his time as dean and life on earth.

Succeeding Awn, Rosen-Metsch said knew that she had big shoes to fill (as well as “really cool socks”). When she was still a finalist for the job, she had walked in on Awn clearing his office, because he wanted to make sure the next dean had space to establish their own vision.

“I couldn’t picture GS without Peter, and I wanted to [spend so much] time learning from him,” Rosen-Metsch said. “He joked that he would spend next year lurking in bushes outside of Lewisohn Hall in case we needed him.”

That same office houses her last memory of Awn. After his meeting with Vice Dean Curtis Rodgers, Rosen-Metsch had requested his help in tying a bow for a gift to an alumnus. Reflecting on his last few hours before the car crash, she said she was reminded of the “many ways that Dean Awn gave us so many gifts and tied so many bows,” as he created possibilities with an open mind and open classroom.

The “Paradox of Peter”

Larry J. Lawrence, GS ’69, Business ’71, said he remembers the combination of “seemingly self-contradictory circumstances” that formed his understanding of Awn—an ex-Jesuit priest and Islamic scholar, a dean of a prestigious university who wore sandals and brightly colored socks, a spontaneous “control freak.” These conflicting aspects of Awn’s life manifested with ease, improving the lives of those around him through his extraordinary nature.

But in all that Awn represented and dedicated his life to pursue, it “required completely selfless promotion of others,” Lawrence said while holding back tears for his friend, mentor, and colleague.

Awn’s niece stood to recount a decade-old promise that in the event he would be chosen as dean, he would bring her to visit New York City.

Jackie Monteleone stood in front of the large crowd, a practice that she had perfected in childhood as Awn created opportunities for his nieces and nephews to speak publicly. At the ceremony, Monteleone read a letter Awn had sent her after interviewing for his position of dean. In his letter, he said that if selected, Monteleone would be able to “see the big library” that is “huge and filled with many books.” It was through her uncle that she would be introduced to a new world to explore.

“Like many of you, I considered Peter to be one of my favorite teachers,” Monteleone said. “He is the same person with the same qualities when he was with his Columbia family that he was with our family.”