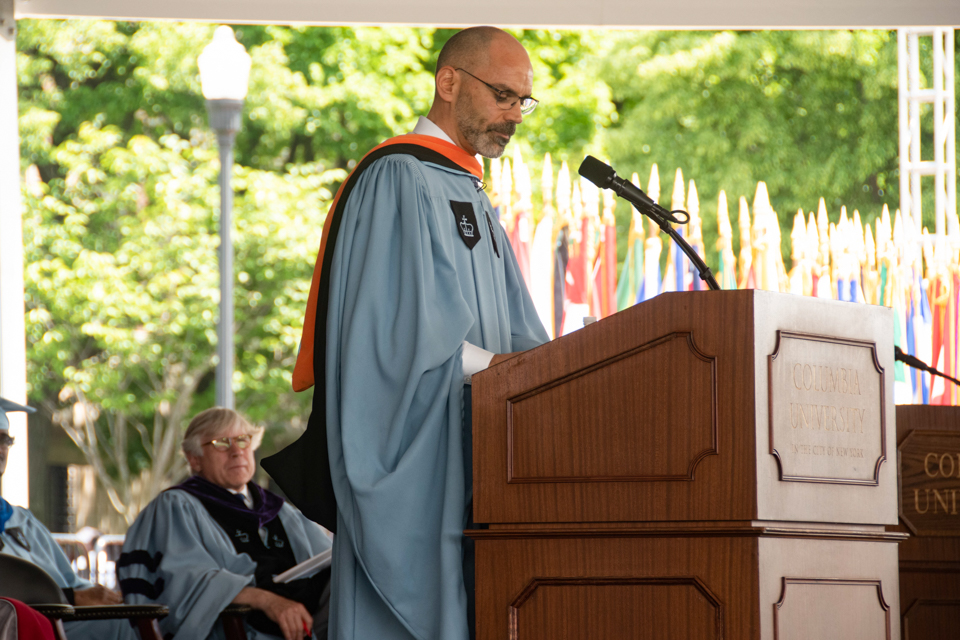 Shawn Edwards, SEAS ’90, ’95 and Chief Technology Officer at Bloomberg, highlighted the importance and expansive impact of engineering in a world that is being transformed by technology at the School of Engineering and Applied Science‘s Class Day on Monday afternoon.

Edwards graduated from SEAS with B.S. and M.S. degrees in electrical engineering. At Bloomberg, he leads a research team that investigates emerging technologies to address and improve technical strategies for the company. His leadership in initiatives that advance academia and industry earned him a place among the financial industry’s top 10 technology leaders, according to Institutional Investor.

Upon entering the workforce, Edwards thought that his degree in electrical engineering would lead him to a long career of building computer chips. At his first job, he did just that—working on mainframe hardware while studying for his master’s degree. When he arrived at Bloomberg, he quickly discovered that engineering thinking alone was not sufficient to tackle the problems that the world faces.

“I didn’t get to where I am today by following my original plan. I got here by realizing as an engineer I could do so much more than I thought,” Edwards said. “You’re graduating into a world where almost every intellectual field and every industry is being transformed by technology. Engineering today is now a foundational skill necessary for the advancement of nearly every discipline. “

He emphasized that Columbia, with its global and humanity-centered emphasis, is a leading force in producing engineers for tomorrow—a sentiment that was echoed by SEAS Dean Mary Boyce.

Acknowledging the foundational role engineering will play in confronting issues such as a growing population, the increasing demand for resources, and the creation of equitable conditions, Boyce asked graduates to bring their talents, ethical mindsets, and moral integrity to develop innovative solutions. Boyce asked for the graduates to consider their roles as Columbia engineers and applied scientists as pivotal to the changing world.

“We are counting on you. In the years and decades to come, the rapid advances in new materials and devices in robotics, in algorithm, and artificial intelligence are going to empower your generation to being transformational change and you much do so responsibly,” Boyce said.

In his closing remarks, University President Lee Bollinger noted the unique position of Columbia engineers who have been versed in the “worlds of engineering and technology, and the worlds of human values.”

“I now urge you to create a professional life in which you marry these areas. This is essential for yourselves and for everyone else on the planet,” Bollinger said.