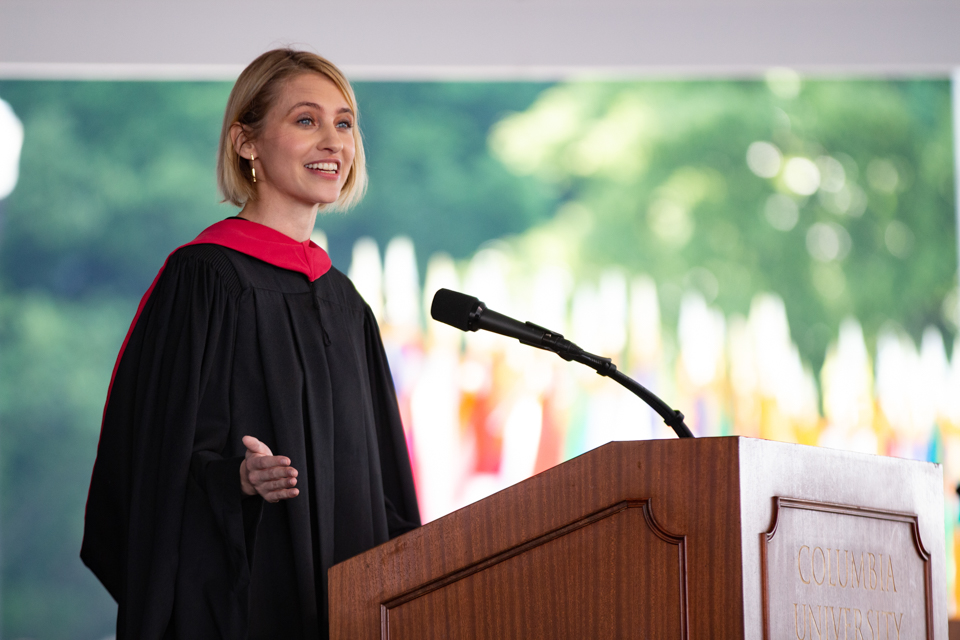 At the School of General Studies Class Day, fashion model and labor rights activist Sara Ziff, GS ’11, encouraged students to use their Columbia education to advocate for equality and equity outside of the classroom. In light of ongoing bargaining negotiations, she also spoke on the graduate student union and the need for protections against harassment through a strong contract.

Ziff began modeling at age 14, and had a successful career in the fashion industry. After enrolling in GS, she directed a documentary which chronicled the darker, abusive side of the modeling industry. She has since been an advocate for labor rights and the protection of child models, and has worked with policy makers to pass multiple bills in New York and California which protect models and their rights as workers.

Ziff emphasized the fact that during her time at GS, Columbia allowed her to ground her experience in the modeling industry in a broader understanding of political and historical trends because of the time spent learning from her professors.

“My professor in the political science department first taught me the history of the labor movement and the power in community organizing,” Ziff said. “For me, that was a gift of wisdom, and I’m sure you have been given similar gifts from professors who may continue to be lifelong friends and mentors.”

After her documentary, Picture Me, was released, Ziff said the agency where she worked failed to take her concerns seriously, resulting in her choice to depart. Even though she no longer had the job that she relied on to pay for tuition at Columbia, Ziff began to focus her attention on how her experience in modelling reflected larger problems regarding workers’ rights.

“As my years went on at Columbia, I began to see myself and my colleagues as workers, and the problems that we face as labor rights issues,” Ziff recalled.

Ziff advised graduates to be fearless and to advocate for causes they care about and use their platforms to generate positive impact.

“Know that justice is contagious,” Ziff said. “When you face injustice, you might think it’s a personal failure, but you will hear other people say ‘me too.’ There are structural issues here that need to be addressed, and if you organize your peers, you can change things. Be fearless and take calculated risks.”

Continuing to emphasize the importance of translating learning in the classroom to concrete policies and campaigns outside of school, Ziff called upon University President Lee Bollinger and Columbia as a whole to negotiate a strong contract with the Graduate Workers of Columbia that included protections against sexual harassment and assault. The graduate student union, which went on strike last year, began negotiating with Columbia in late February.

“The antidote is fearlessness, speaking up for what is right. It starts at home, where Columbia graduate students are bargaining for their first union contract. Unions are one of the most effective frameworks for equality. I sincerely hope that the University puts forth a strong contract with its students,” Ziff said. The end of her remarks was drowned out by the audience’s applause.

Matthew Hess, GS ’19, gave the salutatory address, echoing Ziff’s message by advising graduates to pursue careers wherein they advocate for those who deserve justice and equality. Hess served in the U.S. Marine Corps before attending GS.

“The world needs leaders who care about issues like poverty, racism, religious discrimination, and climate change. As graduates of Columbia we will have more opportunities than most to address these issues,” Hess said. “Let’s remember the second chance that GS has given us and use our success to make spaces for those who have been left behind.”

Bollinger gave a brief address to the graduates of the class of 2019, choosing to focus on the late Peter Awn, dean of GS for decades, who passed away in February and whose life was celebrated in both pictures and words at a commemorative ceremony last week.

“The person most responsible for what we are all celebrating today, for the School of General Studies, is Peter Awn. You are the beneficiaries of all of Peter Awn’s work, but you also take with you the image of a person who you will be fortunate to emulate for the rest of your lives,” Bollinger said.

Brittany Marie Summer, GS ’19, was named the valedictorian of the class of 2019. A former ballerina who danced professionally for a decade at the Boston Ballet, Summer reminded students to value what they’ve learned at Columbia with intention and purpose as they move forward.

“What we’ve learned in class is important, but we must embody our school’s motto and be the light unto others in the way that GS has been for us. No matter what we end up doing, we will always do it on purpose,” Summer said. “Let’s always be willing to take bets on ourselves.”

Correction: Ziff was not dropped from her agency; rather, she said she chose to leave because they did not seriously take into account her concerns. Spectator regrets this error.