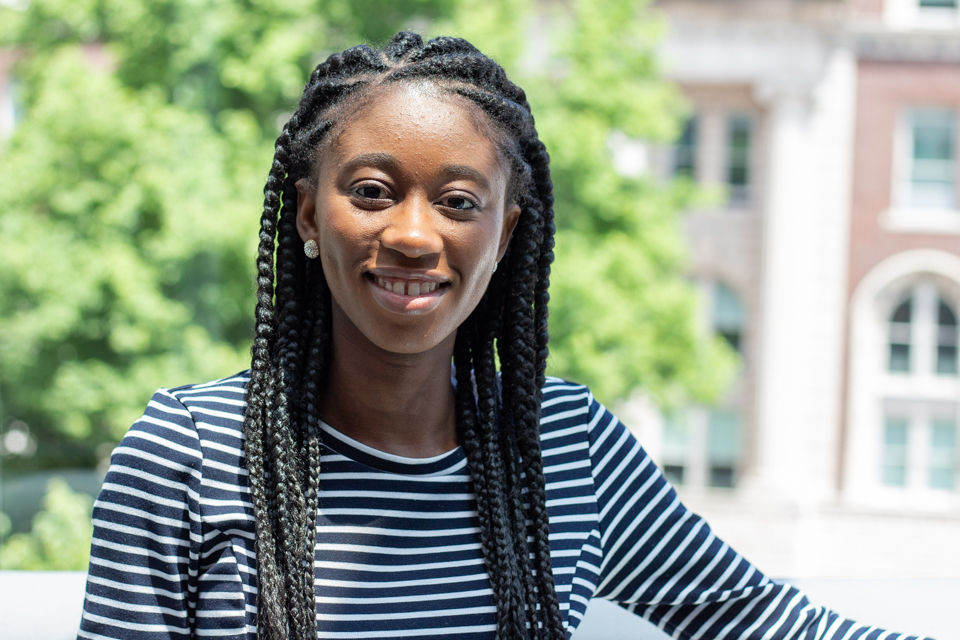 Jed-Joan Edziah, SEAS ’19, arrived at Columbia as part of a 3-2 program after receiving her chemistry degree.

Jed-Joan Edziah, SEAS ’19, knew that with her scientific inclination, she could become someone important. Her trajectory was set—she would change the world, cure cancer, and earn a Nobel Prize.

A week into her first year at NYU, her plans were halted. Unforeseen financial circumstances forced her to leave behind the city and work odd jobs in her New Jersey home. During that time, her feelings of hopelessness presented an opportunity for her to grow in her faith.

“I think that going through that experience of my gap year, growing in my faith and understanding that I am a person who enjoys serving others helps me to think about science differently. I think I am good at this, so what does this mean—what can I do that’s valuable to someone else with this? I think that’s what led me to engineering,” Edziah said.

She arrived at Columbia as part of a 3-2 program after receiving her chemistry degree from Drew University, where she was able to enroll following a gap year. At the engineering school, she fondly remembers on the numerous 3 a.m. study sessions where the problem sets seemed impossible, but the friendships she made assured her that she would persevere.

Outside of the classroom, Edziah was heavily involved in the InterVarsity Christian Fellowship, where she had the opportunity to mentor and forge friendships within a spiritual community. Edziah was able to inform her relationships as modeled by her mentor in faith.

“There is this quote: ‘Being heard is indistinguishable from being loved.’ Experiencing that in my own life was so transformative, it really shaped the way I grew in my faith and grew as a person. That’s what I tried to bring into all of my mentorship relationships,” Edziah said.

If it wasn’t for the prayers, love, and that one time her friend brought her flowers in a time of stress, Edziah said she doesn’t believe that she would have been open to a future outside of the success she had envisioned.

“I realized how much I wouldn’t to be able to do the things that I do if I didn’t know that they were supporting me and if they didn’t fight for me. I realized there was so many times where I had given up on myself, but my mom and my siblings don’t give up on me, my mentor doesn’t give up on me,” she said.

For Edziah, her desire to mentor stems from her desire to improve the conditions of humanity, a mission that she will continue as she pursues her Ph.D. in chemical engineering at the University of Pennsylvania. She had been able to work with Dr. Alan West on her senior thesis, where she was introduced to the realm of renewable energy. While the day-to-day of the lab setting can seem mundane, it is seeing the bigger picture that allowed her to capture the importance of her work in places where the lack of energy contributes to hunger and poverty. It is the bigger picture that allows her to step back in reflection of her time at Columbia a day after she walked the stage at graduation.

“The future is really uncertain. It’s really important for us to accept that and embrace it and not think of life one-dimensionally. I remember thinking ‘Oh my god, all my friends are in college, I’m sitting at home, think is the end.’ It felt like it was. It’s not.” Edziah said.