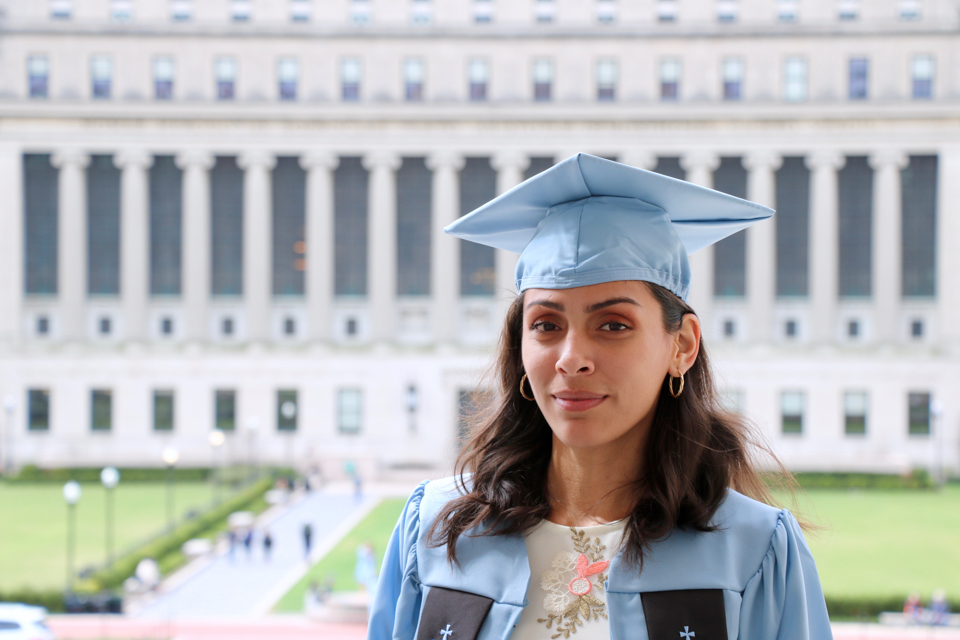 Jennifer Blandón, GS ’19, said she came to Columbia because she knew the School of General Studies was the most competitive, veteran-friendly school.

When asked about her best Columbia memory, Jennifer Blandón, GS ’19, said it was a hard tie between her involvement with MilVets and staying up late with friends, both during study breaks and walking around campus at night to soak in the memories.

“I have Snapchats from two years ago with the guys in the other room. We’re taking study breaks at three in the morning trying to throw things into each others’ mouths. It was the funniest thing. Those memories, I love those. Leaving Lewisohn and walking off campus when the city’s still quiet, I’ve been doing that a lot. I’m so nostalgic. It’s so quiet and beautiful,” Blandón said.

She came to Columbia because she knew the School of General Studies was the most competitive, veteran-friendly school, and due to its location in New York City.

Before coming to the University, she served in the Navy for seven years, as a weapon specialist for her first enlistment and as a recruiter for her second. Near the end of her recruiting, she began studying part-time at DePaul University in Chicago and, and despite achieving a high GPA there, dropped out because she didn’t enjoy her pre-med track. She started back up at community college in Manhattan and transferred to the School of General Studies her sophomore year.

“[In lab] we burned some shit, and it lit up, and it was cool, but it didn’t grab me like social sciences did. I was more interested in writing pieces in women and gender studies than lab. I served for all these years, so I should study something that I’m interested in,” Blandón said.

The 2016 presidential election moved her to choose philosophy over political science—“that’s the world, so let me do something different”—and became particularly interested in her epistemology class upon learning the adjunct professor’s focus on reforming criminal justice.

“When it comes to eyewitnesses giving testimony in criminal trials, saying ‘I know what I saw, that person did it,’ did you really know what you saw? Or, by asking leading questions, did someone give you the answers? By giving a little information, you’ve ruined the process of what really is knowledge.”

Outside of class, Blandón was the first female VP of MilVets, the veteran student organization on campus. She was awarded the General Studies Undergraduate Spirit Award—given to students who have made outstanding contributions through their leadership and service—at the Academic Prizes and Student Leadership Awards Ceremony on May 1. But she also praised upcoming students’ efforts to develop and diversity the involvement of student veterans’ on campus.

“[Being first female VP was] wild; that was mind-blowing to me. Coming into a space dominated by white men and then still being able to be one of the guys, regardless of it being Columbia… We’ve always been so finance-, consulting-, tech-bro, to see there are vets at Columbia that are taking it upon themselves to develop other programs on campus is really dope,” Blandón said.

Despite her other commitments and interests, however, Blandón said she always focused on her academics.

“I loved my lectures. People would blow up my phone but sorry, professor Moody-Adams is lecturing, I have to listen!”

But for Blandón, none of these focuses would eclipse her focus on her community and friends—a message she said she would emphasize to any incoming students.

“Don’t focus entirely on the GPA and grades you get because those late nights [matter more], and supporting each other, just showing up is support enough. Support the homies,” she emphasized.