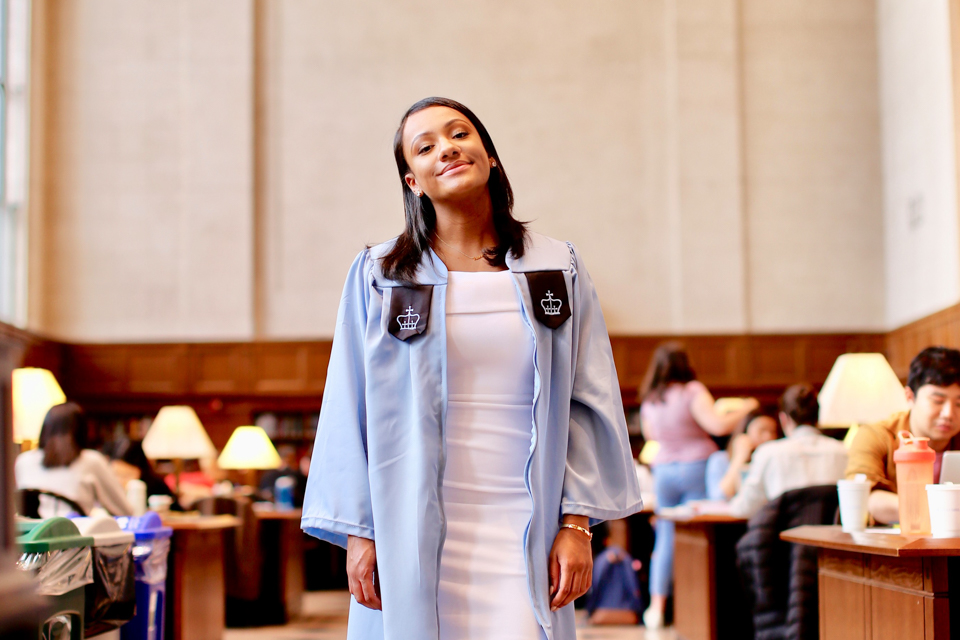 Throughout her time at Columbia, Mendes has been involved in student organizations such as the Black Students’ Organization; the Undergraduate Consulting Club, for which she served as vice president; and Columbia Women’s Business Society.

When she first entered Columbia Women’s Business Society to explore her interest in business and consulting, Kiana Mendes, CC ’19, noted that it was not as diverse of a space as it could have been. Ever since joining her sophomore year and then formally joining the executive board her junior year, Mendes’ platform centered around pushing for genuine diversity and inclusion efforts within the club.

“Seeing a black woman in spaces sometimes was the push I needed to join that space. I would love to be that for someone else if I can be.”

Throughout her time at Columbia, Mendes has been involved in student organizations such as the Black Students’ Organization; the Undergraduate Consulting Club, for which she served as vice president; and Columbia Women’s Business Society, for which she participated in the marketing committee, was the membership development chair, and served as VP in her sophomore, junior, and senior year respectively.

In her first year, Mendes joined BSO to find and connect with the black community at Columbia, which she said provided a safe space for herself and her friends as first-years acclimating to the University.

“The two pillars to my identity are being black and being a woman,” Mendes said. “Through the BSO I connected to that blackness and then through the business society I connected with the female side of me.”

During her time in these organizations, Mendes made it a goal to extend that inclusive space to others by prioritizing women’s empowerment and promoting diversity and inclusion efforts.

“I navigate the space as a black woman, and I try to bring black women with me when I can—that’s my goal in life, to bring more women of color generally into spaces where we were formerly denied access,” she said.

During her time as VP of CWBS, for example, she worked toward that goal by ensuring that a diverse and inclusive body of speakers were present in this year’s annual CWBS Conference, among whom were managing director of Santander Bank, Cristina Schulman, CBS ’95, a member of the Latinx community, and CEO of Deloitte consulting, Janet Foutty, who spoke extensively about the importance of diversity in the workspace during her keynote address.

Mendes also helped start a community outreach program which hosted events at a Harlem middle school to teach young girls about financial literacy—events which she has stated have been critical in her time at Columbia. She recalled how one of their first events, where they went to a local middle school, bought students pizza, and conducted a financial literacy activity reinforced the importance of CWBS for her.

“That was one of the moments where I thought I love this organization, just seeing that and the impact we were having on those young girls who are in our backyard,” she said. “There are so many young girls seeking mentors and we can be that for them, we just have to walk to them, they’re there.”

A political science major with a special concentration in business management, Mendes can be found on the hunt for the next greatest restaurant, bopping to Drake, watching her hometown teams—the Patriots and Celtics—and napping during her free time.

She said she is also a self-proclaimed “obnoxious Bostonian,” and has come to dislike New York City. But she credits the area for forcing her to become an adult, learning how to fend for herself, and ultimately, through its trials and tribulations, for finding her identity.

“I am definitely a different person than the one who I came here as. This place forces you to figure out who you are and who you want to be,” Mendes said. “I always identify first as a black woman, I think that’s such an integral part of my identity, it’s an identity I’m proud of, I never shy away from that, if anything I try to accentuate the fact that I’m a black woman.”