Shreya Sunderram, BC ’19: Activism in conversation, action in the classroom, and radical love in practice

Shreya Sunderram, BC ’19: Activism in conversation, action in the classroom, and radical love in practice 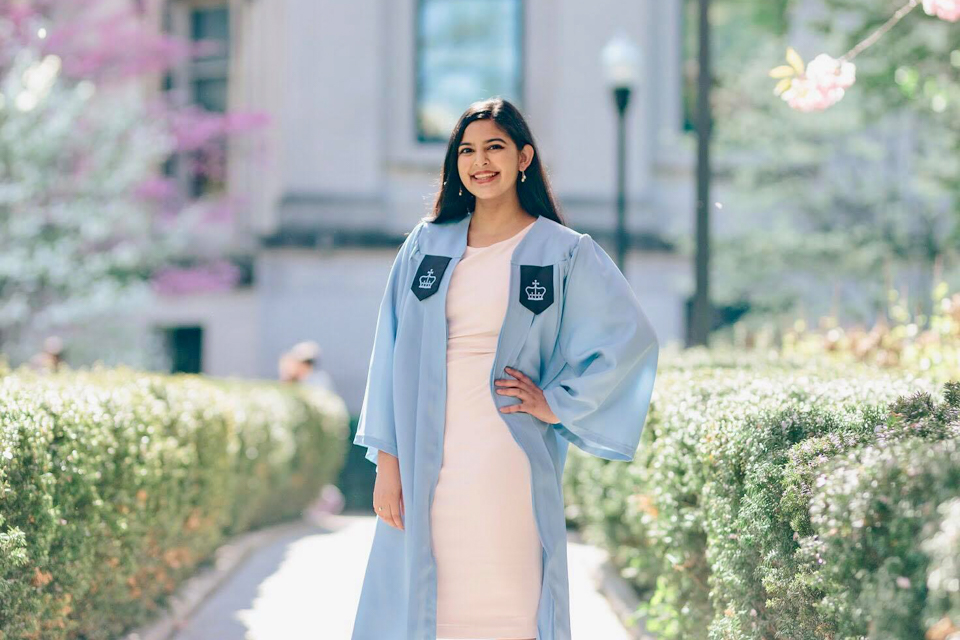 Shreya Sunderram, BC ’19, started the Bold Conference at Barnard.

As Shreya Sunderram, BC ’19, sat in the living room where she holds her most valuable college memories, she thinks to how often the one-on-one interactions with her friends, peers, professors, and students have shifted her understandings of the world.

When she arrived at Barnard, she thought she would pursue a “traditional path” to changing the world. After four years, Barnard showed her how much activism can happen in small spaces. In fact, it was those personal conversations that would define her trajectory as an activist and teacher in the public school system.

For Sunderram, the comments she heard from her friends about having racist professors, wishing they had better accommodations, and having a more diverse curriculum should not be made in isolation. She also knew that someone needed to hear, and something had to be done.

Her senior year, she founded and created the Bold Conference, a day of dialogue between faculty, students, and staff about issues of inclusion and equity at Barnard College.

“We have those conversations in isolation, we have them with other students, we have them in more informal space. Simultaneously, professors are very conscious of some of these issues … but [the conversations] were never happening together.” Sunderram said. “Rather than having the event be a negative space, the point of it was to create this positive idea that if we work together, there are many ways that we can reform the classroom.”

Sunderram said she hopes that the Bold Conference, her biggest legacy at Barnard, will continue annually. In seeing the conversations between students, faculty, and staff happening the the same room, she said she saw how much the community was committed to improving the school.

“It may be an uncomfortable space for some people, but it requires reform and constant activism and love. It’s through love for Barnard that we want to fight to make it better,” Sunderram said.

Most of what prepares her as a teacher and activists she learned through being a student. Sunderram recognizes that all of the issues she faced at Barnard are amplified “tenfold” in the public school system, an idea she affirmed during her time in the Urban Teaching cohort—a program at Barnard that provides teaching certification after students meet a required a minimum of 360 teaching hours.

After a full day of serving as a student-teacher at a public school, Sunderram attended classes that informed her understanding of how to encourage students to authentically share their lived experiences.

On one occasion, she said that as she taught a class on incarceration and prison abolition, many students shared their experiences with the school-to-prison pipeline and their overall dismay about the role of incarceration in society. However, when asked to write a formal assignment about the topic, many students submitted statements of approval toward prisons, because they believed that that kind of essay would be more acceptable, rather than pushing back with their own lived experiences.

In light of these discrepancies, Sunderram said that her mission in life is to “affirm other people's lived experiences and make people feel empowered to share how they genuinely feel about something.”

According to Sunderram, these changes will require radical love for the cause and those who could be impacted—the same love she has for Barnard, and the same love that she has for education.

When she was writing her senior thesis, Sunderram said that reading great thinkers such as James Baldwin, Angela Davis, Gloria Ladson-Billings, and Grace Lee Boggs enabled her to create a life philosophy at the culmination of the project. Citing these authors, Sunderram said both the teacher and person she hopes to become can be summarized simply: “equity, empathy, and radical love.”

“I really hope that if I’ve had any impact on this campus it's that people aren't afraid to use their own agency to push back against things, to ask questions, but to do so in a really compassionate manner. It’s important that in a fight to be an activist and in a fight to create spaces of reform anywhere, it’s important to do so recognizing the humanity of everyone around you,” Sunderram said.