Valerie Jaharis’ BC ’19: Interrogating space and pushing for unequivocal equity

Valerie Jaharis’ BC ’19: Interrogating space and pushing for unequivocal equity 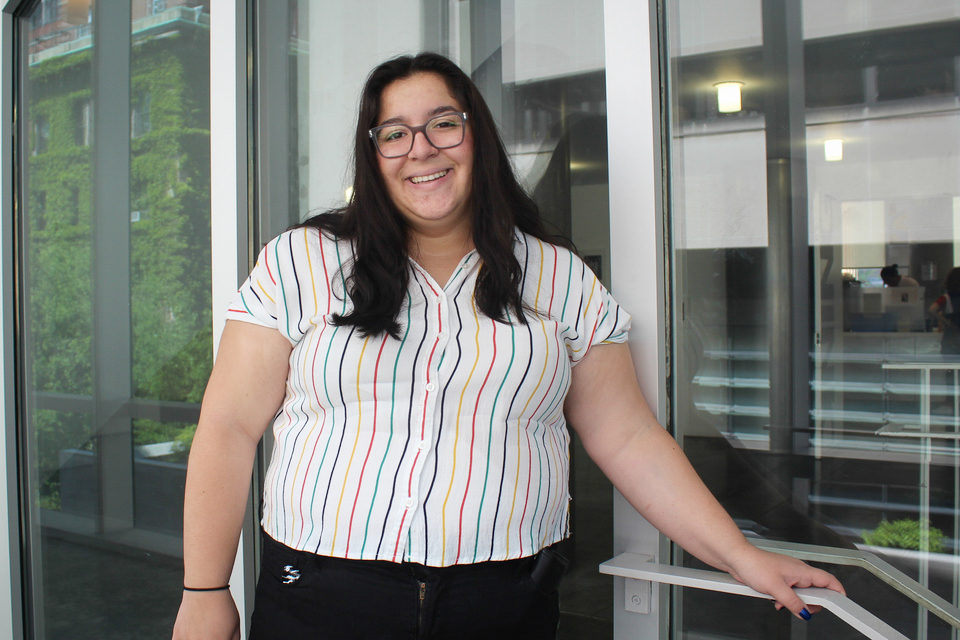 Jaharis’ career at Barnard can be outlined by their work in different policies throughout campus, touching on areas such as accessibility, pronouns, and trans health care.

For Valerie Jaharis, BC ’19, sending impassioned and frustrated emails as a Barnard first-year was only the beginning.

“I did policy work as a freshman without knowing, just sending many angry emails,” Jaharis recalled. “I just saw so many communities that were suffering.”

Jaharis’ career at Barnard can be outlined by their work in different policies throughout campus, touching on areas such as accessibility, pronouns, and trans health care.

As student health services representative for SGA in 2017, Valerie centered their platform around accessibility for disabled students to navigate Barnard’s campus and receive necessary accommodations. When they first started at school, students with disabilities were not exempted from physical education requirements, many of which included taking classes that could be inaccessible.

“It all began with my friends and their experiences, and I did supplemental research, which I used to advocate for policy changes,” Jaharis said.

In speaking to friends, Jaharis began to push for changes to PE requirements, leading to the creation of new options for disabled students who struggle to complete the requirement. These included allowing physical therapy to count for a student’s PE requirement, as well as new PE courses which teach wellness in a nonphysical capacity.

“Some of the work I did was out of necessity. I don’t know if I would have graduated here at Barnard if I hadn’t been able to do something about the discrimination my friends were experiencing,” they said. “Being a disabled student is really hard on this campus. So many marginalized groups on campus were being excluded, and I felt prepared to advocate for them.”

While on SGA, Jaharis also learned that navigating student government at Barnard as a trans student could be challenging both due to assumptions within the student body and policies that assumed cis-identities. Each week as SGA meetings begin, each representative shares their preferred pronouns, and as the only person on the Representative Council who does not identify as a woman, Jaharis said they remember these meetings as isolating.

“It’s she/her, she/her, she/her, and then you have to out yourself,” Jaharis said. “And until I pointed it out, nobody understood how hard it was to be singling yourself as the only trans student in the room to whichever [member of the administration that] was addressing us that week.”

After a year on SGA, Jaharis transitioned to becoming a Well Woman peer educator, a trained student leader who educates the student body on health and wellness—work they said was the most meaningful of their experience on campus.

Some of their workshops drew a crowd, even including administrators such as Avis Hinkson, dean of the college at the time, who came to an event on accessibility and inclusivity.

“Well Woman really made me realize how much I care about interpersonal connections. I love intentional thinking. It fuels me and my work as an activist,” Jaharis said, “I get emotional support and fulfillment from activist spaces. It’s as much for me as it is for the people I want to help.”

As a trans peer ed in Well Woman, Jaharis said they also constantly considered nonbinary, trans, and genderqueer students in their community who didn’t feel comfortable or safe there, particularly due to an environment meant to support female-identifying students exclusively.

“My training at Well Woman [was] surround[ed by] vaginas, and vulvas, and IUDs. I don’t know anything about penis and teste anatomies. That is the anatomy of students that go to Barnard, and it wasn’t taught to me,” Jaharis said.

Reflecting on their activism through policy during their time at Columbia, Valerie said they wanted to continue more inclusive activism, and cultivate comfortable spaces for disabled, trans, and queer people.

“My work has become so much more intersectional. I don’t mean that as a buzzword, I mean that I actually wasn’t thinking about certain populations within the activist community, and I am dedicated to making space for that,” Jaharis said.

Through their work, activism, and daily life, Jaharis said they were guided by a simple question.

“The first thing I ask is: In what way is this space not made for other people? Who is this space made to exclude, and what can I do?”