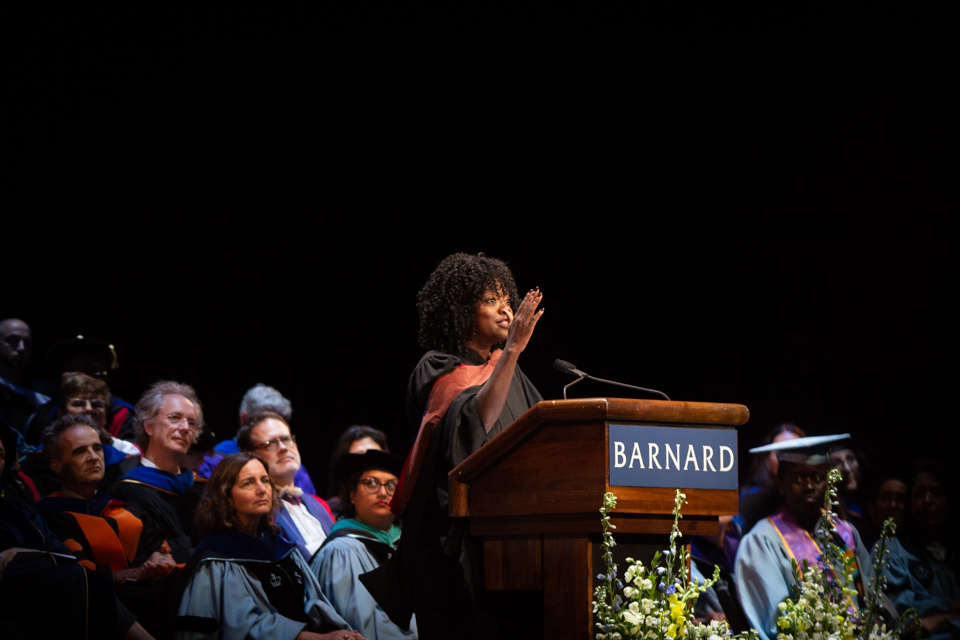 Davis is the first black woman to be awarded a Tony Award, Emmy Award, and an Academy award, known as the Triple Crown of Acting.

Award-winning actress and humanitarian Viola Davis told graduates to find an “elixir” that drives them to work for causes bigger than themselves at Barnard commencement at Radio City Music Hall on Monday night, emphasizing that intersectionality is crucial for empathy and inclusivity.

“History is not the past, it is the present. We carry history with us, we are our history. You are a product of your environment,” Davis said. “Your resistance is an amalgamation of every triumph, battle, every woman who had an idea and massaged it, every person who survived slavery and Jim Crow, each of them passing this all onto you, with love.”

Davis is the first black woman to be awarded a Tony Award, Emmy Award, and an Academy award, known as the Triple Crown of Acting. She has starred in many films, including “Fences,” “Widows,” and “Doubt,” wherein a single eight-minute scene earned her an Oscar nomination. Davis is also known for her work as an activist and has worked with the charity Hunger Is to take steps eradicating child hunger in America.

Davis recalled her childhood, growing up in a low-income household on Rhode Island where she often went hungry. She detailed a particular anecdote where she sat on her bathroom floor at nine years old, and demanded that God take her away from the life she lived.

“[I] said ‘God, if you exist, when I count to 10 I want to be gone,’” Davis said. “But he led me right there, so that when I gain strength I can remember what it means to be hungry, to be in trauma, to be living in poverty. I can remember what it’s like to be a child who dreams and sees no physical manifestation of it.”

Davis encouraged graduates to own traumatic histories and not to shy away from them, and to understand that these experiences give them strength and power to empathize with others and ultimately to generate change. She also emphasized that moving forward and fighting for change requires having the courage to confront not just select histories, but both the good and bad in history.

“How about the greatest document written in this country was written at a time when black people were enslaved and women were fighting for their bodies? Who said that all of you has to be good? All of you is all of you. Own it. Own every shooter in America, every experience and memory even if it was dramatic. If it hurts to wage battle, ask why, then you begin to reconcile, to have the courage to face, and then finally to connect, to empathize, and then to heal. This is all the fuel of the warrior,” Davis said.

However, Davis also emphasized that these movements for change must take on the responsibility not only for conversation, for individuals, but broader change.

“You attend a school whose mission it is to give you not just a diploma, but a sword. Wield it or put it away as a conversation piece,” Davis said.

Davis also stressed the importance of empathy as the graduates moved through life.

“You can only understand people if you can feel them in yourself,” Davis said. “On this day of your genesis, your commencement, your mark in your history, perhaps your elixir is this: You can either leave something for people or leave something in people.”

At Barnard Commencement, Medals of Distinctions were awarded to other women who excel in their fields, including Sana Amanat BC ’04, vice president of content and character development at Marvel Comics, Cherrie Moraga, chicana lesbian poet, playwright, and essayist.

Shirley Adelson Siegel, BC ’37, the first head of New York State’s Civil Rights Bureau and a lawyer who advocated for fair housing laws and civil rights in New York City, received a standing ovation from the crowd as she received her award.

Student speakers included Demme Durrett, BC ’19, and Surbhi Lohia, BC ’19, the co-chairs of Barnard’s Senior Fund. Durrett and Lohia announced that the Senior Fund this year will fund efforts to support first-generation and low-income students attending Barnard. Each quarter of the fund will be donated to different initiatives assisting these students, including to Barnard’s FLIP library and to the Tisch Scholarship for Refugee Women.

Barnard President Sian Beilock addressed the graduates and gave them pointers on how to combat imposter syndrome as they go on to excel in their chosen fields. Beilock cited her own research, recommending that when students feel unsure of whether or not they belong where they are, they should write their fears down on paper.

“You are all the kind of women that infiltrate and subvert,” Beilock said, “you are all well equipped to go and meet the world. You are all capable of greatness, and that has nothing to do with the validation that you receive from other people.”