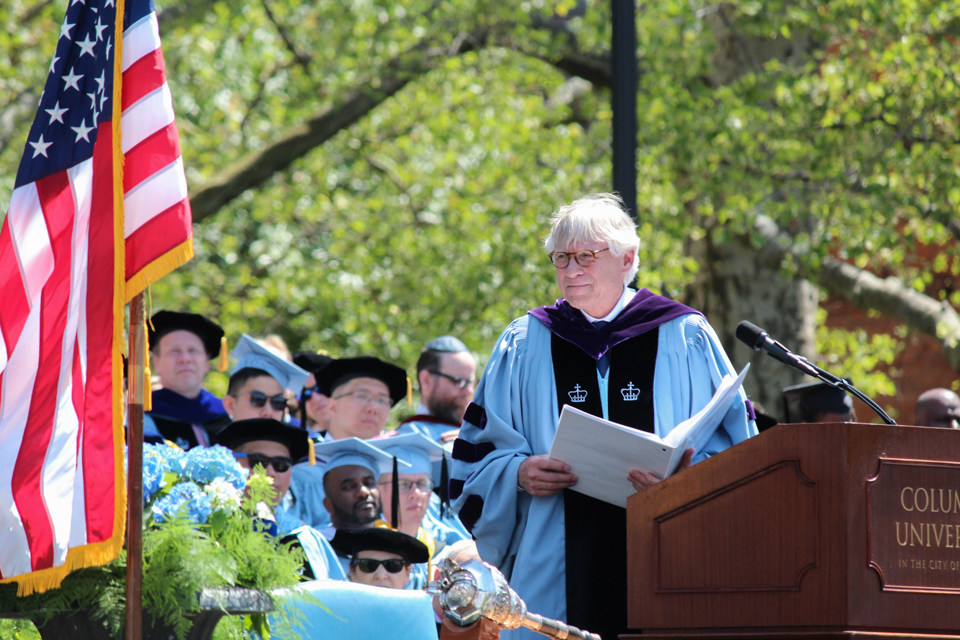 Bollinger spoke about threats of blatant disregard for “the search of truth,” and he encouraged graduates to raise their voices and reflect on what’s at stake in our own country and in our world.

As Sir Edward Elgar’s “Pomp and Circumstance” blared throughout College Walk, graduates from across the schools of Columbia University gathered for the culminating ceremony of Commencement week. University President Lee Bollinger addressed an increasing imperative for truth in a world which prosecutes those who seek it.

The ceremony officiates the conferring of degrees for all 16 schools of Columbia University as well as Barnard and Teachers College. University Medals for Excellence and honorary degrees were also represented to honorees.

Bollinger spoke about threats of blatant disregard for “the search of truth,” and he encouraged graduates to raise their voices and reflect on what’s at stake in our own country and in our world. He quoted former Associate Supreme Court Justice Oliver Wendell Holmes Jr. and acknowledged how a tolerant societal climate is essential in the search of truth.

“The choice of openness requires the search for truth that goes against an instinct, the impulse to persecute those we disagree with is perfectly logical,” Bollinger said. “But Holmes understood, as we should by now, that a tolerant society is necessary for the purposes of seeking truth.”

Bollinger proceeded by stating that this pursuit requires constant vigilance, citing examples from history wherein there has been a lapse in ideals, as seen in the imprisonment of presidential candidate Eugene V. Debs in an era when communist and socialist ideologies were persecuted. According to Bollinger, this lapse is once again becoming apparent.

“Today, a century later, a new threat to our core values has emerged, around the world and in this country. The rise of authoritarianism often in the guise of democratically elected despots [definine] feature[s] of modern life, the tactics are age old,” Bollinger said.

He warned the audience that this “assault on truth” manifests itself as attacks on the press, journalists, and members of the University community, and that we must be careful not to underestimate negative impacts of censorship. Bollinger cited the case of Jamal Khashoggi—a Washington Post reporter who was killed while in Turkey.

Bollinger deemed Khashoggi’s killing as a violation of international law and human rights, and possibly a violation of American law as well, as Khashoggi was protected by the First Amendment.

“It is deplorable that no action has been taken in this country to bring his killers to justice and vindicate U.S. interest in precedent that should concern us all,” Bollinger said.

He continued by saying that “undermining of honest discourse” is also apparent on the national stage when the free press is labeled the enemy of the people and when universities are cast as “incubators of intolerance.”

However, Bollinger pointed to active campus discourse as seen when speakers are invited from all sides of the political spectrum and the creation of the course Contemporary Civilization in 1919, which requires students to apply academics to problems seen in society. He spoke about the need for universities to become accessible to outside communities, referencing the establishment of the Manhattanville campus as Columbia’s manifestation of this mission.

The mention of Manhattanville received audible pushback from the audience. The Manhattanville project has been widely criticized for its impact on the surrounding community, particularly for the displacement of residents.

Peter J. Awn, former dean of the School of General Studies and professor of Islamic and comparative religion, was awarded a posthumous Doctor of Letters as Bollinger acknowledged his dedication to both the University and his students. Awn died at the age of 75 as a result of injuries sustained during a car crash while walking home from campus on the evening of Jan. 25.