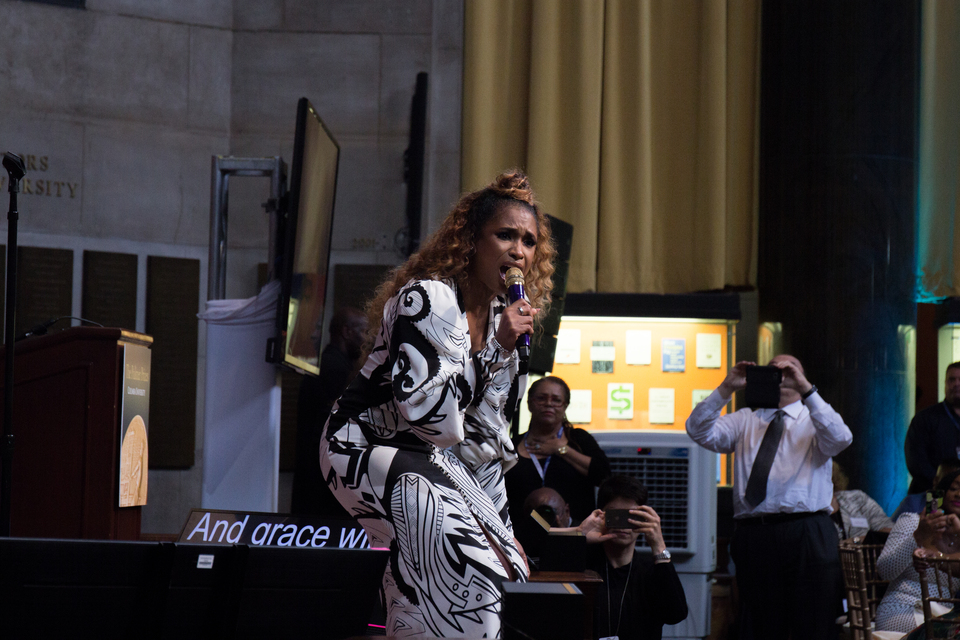 Jennifer Hudson performed at this year's Pulitzer ceremony in honor of Aretha Franklin's life and work.

The awards have been administered by Columbia since they were created and endowed by Joseph Pulitzer, founder of the Columbia School of Journalism, who created and endowed the prizes in 1917. Tuesday’s ceremony featured the work of journalists and artists who took risks and embodied the search for truth, which Bollinger described as the “bedrock of modern life and society.”

In his opening remarks, Co-Chair of the Pulitzer Prize Board Robert Blau emphasized the importance of journalism in an era where the “search for truth” is under threat.

“At a time such as these, when intellectual life is demonized, and the search for truth in the face of power is not just belittled, but punished and repressed, the works the Pulitzer awards are examples of what our sustenance and futures depend upon,” said Blau. “You remind us of what is fundamental to a decent and humane society.”

Prior to awarding prizes to recipients, Dana Canedy, the first woman, first person of color, and youngest person to hold the title of Pulitzer administrator, issued a special citation to the staff of the Eagle Eye student newspaper at Stoneman Douglas High school. The citation was awarded for seventeen obituaries that the students published following the shooting at the Parkland high school in February of 2018.

“These budding journalists remind us all of the media’s unwavering commitment to bearing witness, even in the most tragic of circumstances. There is hope in their example,” Canedy said. Following her words the student journalists rose to a standing ovation from the audience.

Canedy also acknowledged the presence of Reuters reporters and Pulitzer Prize winners Wa Lone and Kyaw Soe Oo, who were imprisoned by the Myanmar government for reporting on the massacre of Rohingyan Muslims in Myanmar’s Rakhine State. Lone and Oo were in Myanmar federal prison for 511 days out of a 7 year sentence, and were released in early May of 2019.

“I would like to take this moment to recognize the journalists around the world who risk their lives, freedom, and everything they have to report the news,” said Lone.

In his speech, President Bollinger first addressed the audience, emphasizing the need to acknowledge the fragility of the freedom of press and its importance for democracies to thrive. He also noted that this year is the 100th anniversary of the first supreme court cases interpreting the first amendment.

“The search for truth is truly the bedrock of modern life and society,” said Bollinger. “It is an extraordinary achievement to have built the most protective shield for freedom of expression in the history of the world. The newness of what we celebrate today should also make us that much more conscious of just how fragile it all is.”

Aretha Franklin, who passed away in August, was awarded a posthumous Special Citation for her lasting impact on American culture and music. In her honor, Jennifer Hudson, who performed at Franklin’s funeral and will star as Franklin in an upcoming biopic about the artist’s life, concluded the ceremony with a performance of “Amazing Grace” Kennedy noted that Hudson’s flight was cancelled, and in spite of the cancellation she drove for 14 hours to perform at the ceremony.

The coveted Pulitzer for Public Service was awarded to the staff of the South Florida Sun Sentinel, for reporting on the failure of law enforcement to monitor gun violence before and after the shooting at Marjory Stoneman Douglas High School in February of 2018.

The Pulitzer for Investigative Reporting was awarded to Matt Hamilton, Harriet Ryan CC ‘96, and Russ Buettner of the Los Angeles Times for reporting on a University of Southern California gynecologist who allegedly violated hundreds of women for decades.

The full list of winners can be found below.

Staff of the Pittsburgh Post-Gazette

Staff of the Wall Street Journal

Staff of Reuters, with notable contributions from Wa Lone and Kyaw Soe Oo

The Overstory by Richard Powers

The New Negro: The Life of Alain Locke by Jeffrey C. Stewart

Be With by Forrest Gander

Amity and Prosperity: One Family and the Fracturing of America by Eliza Griswold