Book Culture owner says stores will close this summer without $500,000 in funding

Book Culture owner says stores will close this summer without $500,000 in funding 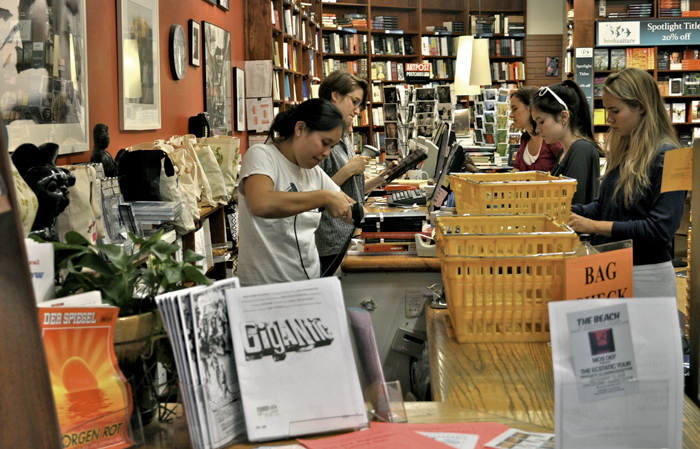 Students line up to purchase textbooks from Book Culture.

Book Culture, a beloved local chain and a reliable hub for Columbia students in need of textbooks, faces an imminent threat of closure unless it receives at least $500,000 in funding, owner Chris Doeblin announced in an open letter last week.

The stores may close before the end of the summer in lieu of funding to pay vendors and stock shelves, posing a potential obstacle to student access to textbooks, Doeblin told Spectator.

Doeblin’s announcement comes as local businesses owners across New York City call for more support in light of increasing rent prices, minimum wage hikes, and the growing presence of giants such as Amazon, which continues to eye opportunities to return to the city. In the last year, local businesses just blocks away from Columbia’s campus—including Amir’s Grill, M2M, and Nussbaum and Wu—have all closed their doors.

Earlier this year, support for local establishments like Book Culture, which has two locations in Morningside Heights, found itself at the center of discussion among the Columbia College Student Council. In order to reduce textbook costs for students, administrators introduced a plan to undergraduate student councils last spring detailing a partnership with Barnes and Nobles, aiming to set a flat increase to tuition to pay for all students’ textbooks during the year. In response, many cited the potential toll on local bookstores, which would see significantly less business.

According to Doeblin’s letter, the store’s financial woes largely stem from increases in payroll costs, which have spiked 50 percent in the last year. The announcement comes just months after New York City minimum wage rose last December to 15 dollars an hour for companies with greater than 10 employees, a hike that began in December 2016 when the minimum was just 10 dollars an hour.

Currently, the bookstore employs over 75 people at peak season across all four of its locations, and as of 2018 had a payroll of over $1.7 million.

“When we received the news that the minimum wage had passed state and senate legislature… we did forecasting for the next couple of years and we saw immediately that we were going to be unsustainable with that system.” Doeblin said. “It came on so fast in 24 months we couldn’t cope.”

Wages at Book Culture have come under question in previous years, culminating into a strike in 2014 when employees picketed stores for low starting salaries and lack of benefits. Prior to that, Spectator reported on complaints from employees who cited issues regarding health insurance and holiday pay 2009. After facing significant backlash for firing five employees who joined the Retail, Wholesale and Department Store Union, Doeblin agreed to recognize the union and rehire four of the five employees a few months after the strike, eventually raising minimum wage as New York City legislators announced it would mandate increases.

Outside of payroll costs, Book Culture managed to stay afloat due to generous landlords, among them Columbia, Doeblin said. When the bookstore realized that it would face significant hurdles following the minimum wage raise, Columbia lowered rent prices for the store’s 114th Street and Broadway location so they could stay in business.

Doeblin believes that Book Culture needs at least $500,000 in the form of a term loan, which would be repaid in regular payments over a set period of time, but hopes to find $750,000 to a $1 million in order to avoid closing before the summer.

Earlier this year, Westsider Books was able to stay open amid funding challenges thanks to a crowdsourcing campaign. However, Doeblin does not believe that crowdsourcing would generate enough to save Book Culture, which requires almost ten times as much money as Westsider needed.

Since he made the announcement, Doeblin said he has met with New York State Senator Michael Gianaris and plans to meet with members of the Committee on Small Businesses of City Council to secure funding and bring attention to the plight of local businesses in the city. Manhattan Borough President Gale A. Brewer also released a public statement, naming herself a “regular customer” of the store and citing its potential closing as “devastating” for the local community.

“If there’s one last service we can provide to the community, it’s to make City Hall and the government aware that we need to do things differently. We can’t continue to do nothing about Amazon and Walmart and the huge mega companies of the world and expect a future where small businesses like Book Culture exist,” Doeblin said to the Spectator.