Convocation 2019: Sundown marks beginning of the Columbia journey for 1,406 first-years

Convocation 2019: Sundown marks beginning of the Columbia journey for 1,406 first-years 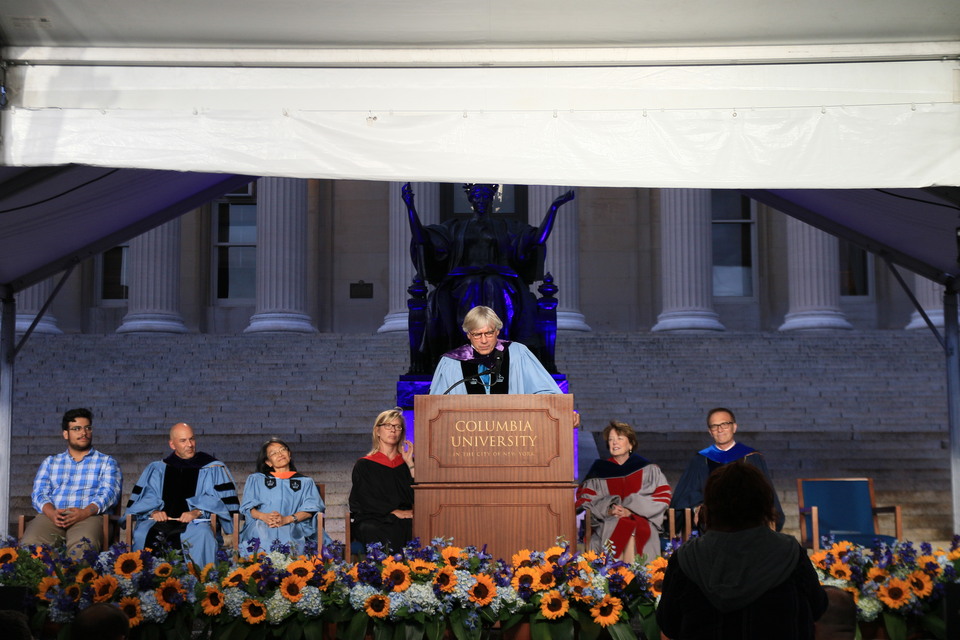 Brought together by family, GroupMe conversations, and life-long friendships, hundreds awaited the excitement that surrounds Convocation 2019.

Hailing from all 50 states and 74 foreign countries, the class of 2023 awaited its official introduction as students of Columbia College and the School of Engineering and Applied Science.

“All of us, all gathered here for the purpose of welcoming you on this special day. … Convocation is the ceremony where aspiring Columbians finally become truly Columbians,” Dean of Undergraduate Admissions and Financial Aid Jessica Marinaccio said as she welcomed the 1,406 first-years awaiting the beginning of their Columbia journeys.

As the sun began to set, the swarms of excitement, pride, and anxiety made their way into the crowd that constituted parents, siblings, grandparents, mentors, and friends—all of whom would be saying goodbye to their Columbia student by sundown.

Georgia-native Sophie Sebuh, CC ’23, waited in anticipation alongside her family for the ceremony.

“I’m excited—and a little nervous—but mostly excited,” Sebuh said. She looks forward to joining clubs on campus and creating a community centered around her interests.

Her younger brother, Henoch, looked into the crowd as she spoke. When asked how life would be different without his sister, he said, “I’m excited. I’m not gonna miss her.”

Clarke Peoples, CC ’23, sat at Convocation after having decorated her dorm, a milestone that she had said been planning for her whole life. She was joined by her father, Willie, who lives in Washington, D.C. and her mother, Felicia Peoples, who lives in Atlanta. Ms. Peoples’ father joked that he was “very excited she’s off” because he will only live five hours away from her-- a luxury that her mother won’t have.

“We’re really, really close and she’s never really been away from me like that,” Ms. Peoples said. “I’m more excited for her than nervous or anxious about it, but it will be different.”

Julissa Nova, mother of Juliette Richart Nova, CC ’23, said that the family has already felt the blow of Juliette’s absence as she had moved out of Miami to Columbia a week prior to Convocation. But during that time, Juliette would meet new people and form new friendships that would make Columbia her home.

During a break in the somber moment, Cristian Sturek, Juliette’s father, exclaimed, “She’s finally getting out of the house. Woohoo!”

Tamara Pete thought about the dramatic transition that a move from New Mexico to New York City would entail for her daughter, Kianna Pete, CC ’23. According to Tamara. Pete, this will be the first time that the pair spends a significant amount of time apart, but she noted that it would open new possibilities for her daughter to explore a fast-paced environment.

“I think just being in the city—it’s crazy, I’ve never been to anything like this. There’s so many opportunities that you can have here that you can’t get anywhere else,” Kiana said.

When asked what he would miss the most about his Houston home, Amiri Scrutchin, CC ’23, said, “Not being cold.” 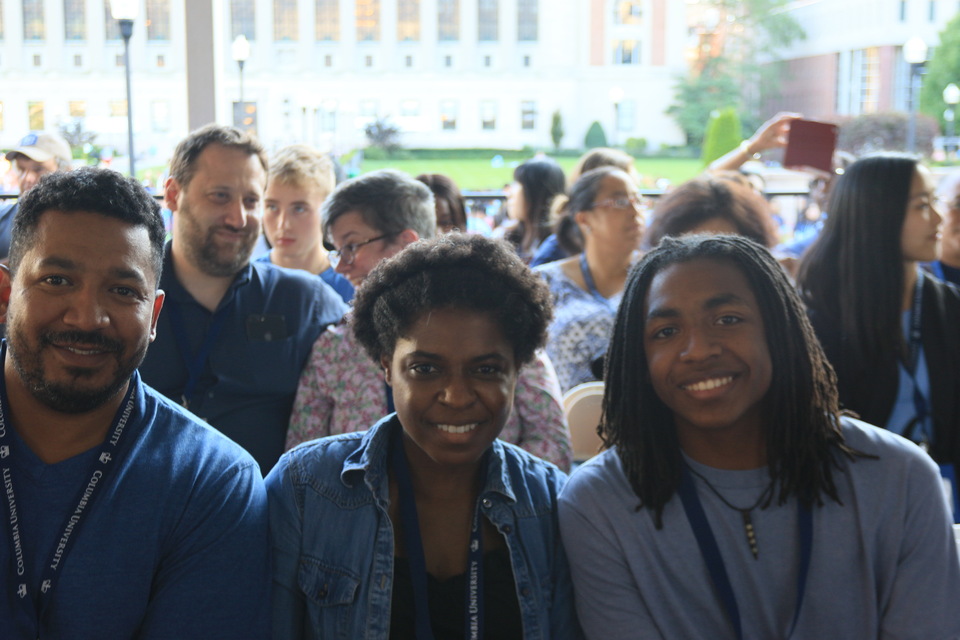 For many students, the urban landscape of New York City represents the endless possibilities to explore a wide variety of interests concentrated in 320 square miles. Without having to leave the Morningside gates, Zach Schermele, CC ’23, will be able to interact with more people than he has his whole life in Montana. He is an aspiring journalist who is excited for Literature Humanities and applying to Spectator.

His father, Chuck Schermele, said that even before landing in New York City, Schermele had already been published in Teen Vogue. 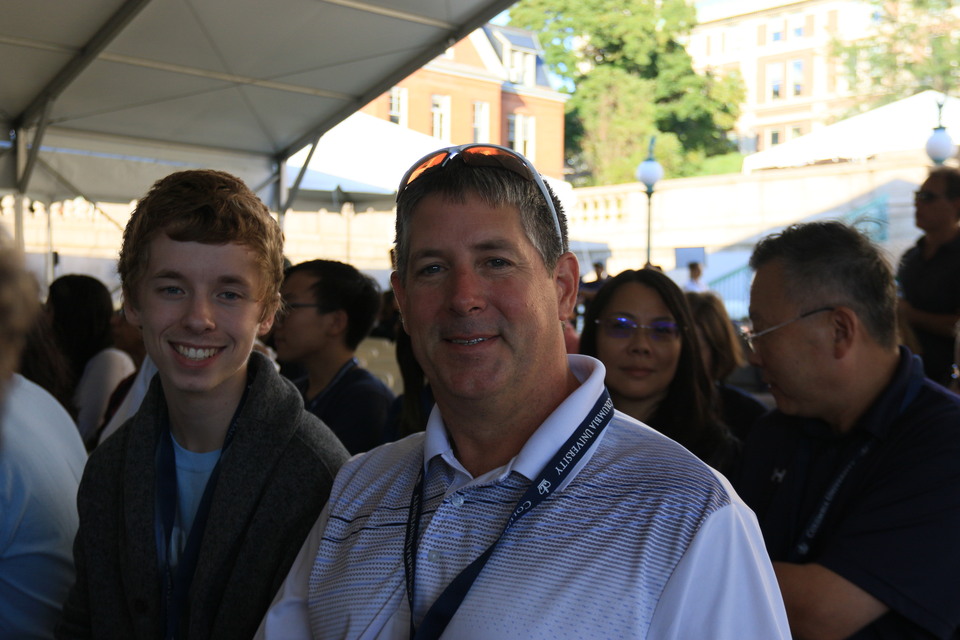 “I’m excited for him to continue to foster the connections that he’s made through the journalism industry,” Chuck Schermele said.

The Academic Success Programs cohort crowded within the rows of chairs, less than a month since the members spent five weeks together in Schapiro Hall. The program, which is meant to create a network of support among mostly first-generation low-income students, creates the opportunity for 60 students to become accustomed to the social and academic aspects of Columbia. First-generation students make up 18 percent of the class of 2023.

While the first day of the New Student Orientation Program is the official introduction to Columbia life for most, some students have been anticipating the sense of community since the moment they received their acceptance letters and joined numerous social media platforms. At Convocation, incoming Columbia College first-years Crystal Foretia, Malcolm Toleno, and Fidel Martinez sat down together, a moment that represented the culmination of numerous GroupMe conversations in which they looked forward to arriving on campus. Toleno and Martinez are roommates who were matched to live in Carman Hall, an experience that they said they are excited to share. 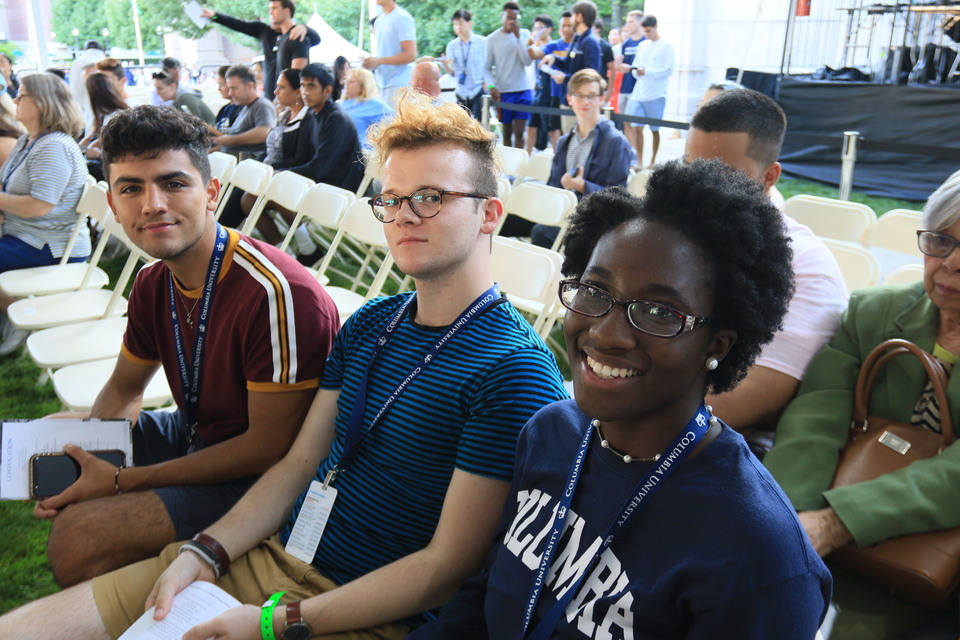 “I am excited to meet new people—I come from a town of 10,000 people from Vermont, so being in New York, where the school is as big as my town, is exciting. Also, I mean the classes, obviously, but the people is a real draw for me,” Martinez said.