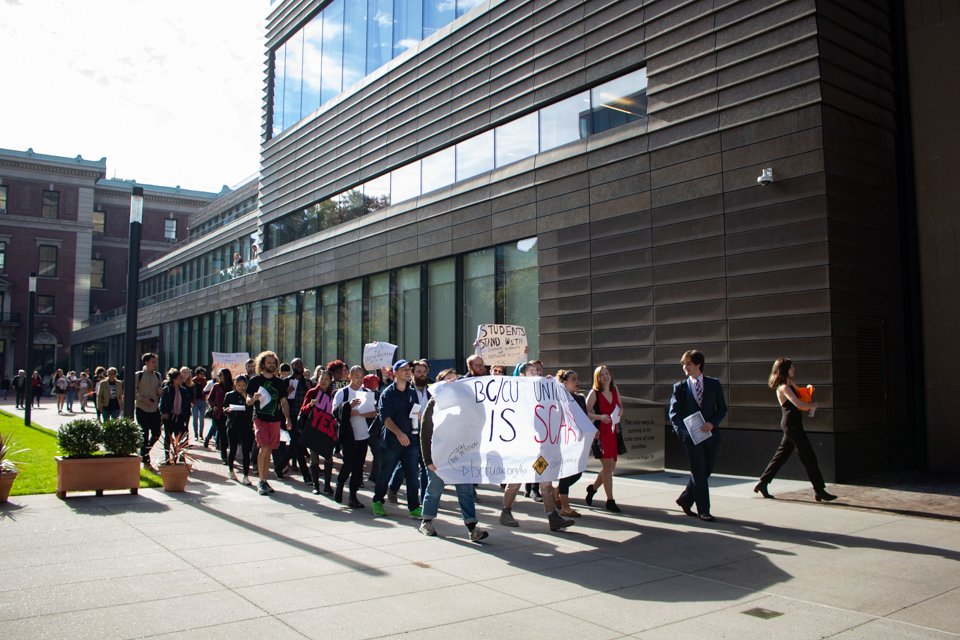 Debate over who should be included in the graduate student union has existed nearly as long as union advocacy itself.

With union elections approaching at the end of the month, the Graduate Workers of Columbia-United Auto Workers are faced with a pressing debate: Barnard undergraduate teaching assistants—many of whom teach courses within Columbia departments—still cannot participate in or vote on union decisions.

Following two decades of back-and-forth, a student worker strike at the end of the 2017-18 academic year, and the threat of a second strike during the fall 2018 semester, the University finally agreed to bargain with the graduate student union last November. On Feb. 26, the GWC-UAW met with University representatives for their first set of formal negotiations.

Debate over who should be included in the graduate student union has existed nearly as long as union advocacy itself. The University has long asserted that the bargaining unit should exclude both undergraduates and master’s students because they spend much less time as employees and have different interests from Ph.D. candidates. The union has continuously argued the unit should include undergraduate and master’s students as per its initial petition, insisting that they do have similar interests and relationships to the employer.

These questions of inclusion in the bargaining unit arose again after a GWC meeting in April, where it was stated in minutes obtained by Spectator that Barnard student teaching assistants were not counted as a part of the unit, despite the fact that multiple Barnard students and other members of the unit believed that they were.

If not represented on the bargaining committee with the union, any contracts or negotiated agreements between the union and the University, such as wage hikes or grievance procedures, would not apply to BarnardTAs. They would also be unable to participate in union decisions, including the upcoming bargaining committee elections on Sept.r 25-26.

The status of Barnard student TAs has come down to their connection to Columbia—a connection that Catherine Chu, BC ’20, teaching assistant for the computer science department at Columbia, believes the union does not consider legitimate.

“They took one look at my email address and said [they noticed] I was a Barnard student and, unfortunately, you have to be a student at Columbia to be part of the student workers union and to participate overall,” Chu said.

According to union spokesperson and fourth-year GSAS student Colleen Baublitz, whether or not Barnard students can be considered part of the bargaining unit is left up to the National Labor Relation Board’s initial decision. UAW Local 2110 could not immediately be reached for comment.

“The distinction [of who is part of the bargaining unit] is based on the decision that was made by the NLRB in that Columbia students are included in our union,” Baublitz said. “That being said, we of course support the workers that are Barnard students.”

In 2016, the NLRB decided that “students who perform services at a university in connection with their studies” can be considered lawful employees.

As she was denied admittance to the union, Chu is unable to participate in any decision-making, including upcoming elections for the bargaining committee, despite her presence at union meetings and continuous support.

“The work I do is exactly the same as any other TA, regardless of the school they’re a part of,” Chu said. “If anything is inadequate or anything is going wrong [with regards to employment], all my problems go towards Columbia. I need to inquire from them. They’re my employer.”

Before the strike in April 2018, former TA Eleanor Murguia, BC ’19, said she was not excluded from participating in union decisions. Murguia, who voted for and participated in the strike, added that she firmly believes that Barnard student TAs should be counted as part of the bargaining unit.

“I’m definitely disappointed,” Murguia said. “It’s sad, disappointing, frustrating, but it’s not exactly shocking that Barnard would be excluded from something like this.”

While Barnard does have its own union—the Barnard Contingent Faculty Union-UAW Local 2110—it does not represent undergraduates at Barnard who are employed by Columbia University, as it only deals with relationships in which Barnard College is the employer.

Chu noted that Barnard teaching assistants not being able to vote and fully participate in the union only exacerbates the Barnard-Columbia divide. Despite this, she said other union members have expressed support for Barnard student TAs.

“Most [students and members of the bargaining committee] that I’ve been talking with have been supportive,” Chu said. “People who are in charge of allowing me to vote said no.”

Lucie Le Blanc, BC ’21, a TA in Advanced Programming, feels distanced from the entire bargaining process and union affairs as a Barnard student.

“As a Barnard TA, it’s a little bit worrying to see all these things happening when I have no control over them,” Le Blanc said.

Editor’s note: Lucie Le Blanc is a former associate product developer at Spectator. She is no longer a member of Spectator’s staff.