The cost of the fine print: For low-income students, the promise of a full scholarship obscures the challenges of paying the student contribution

The cost of the fine print: For low-income students, the promise of a full scholarship obscures the challenges of paying the student contribution 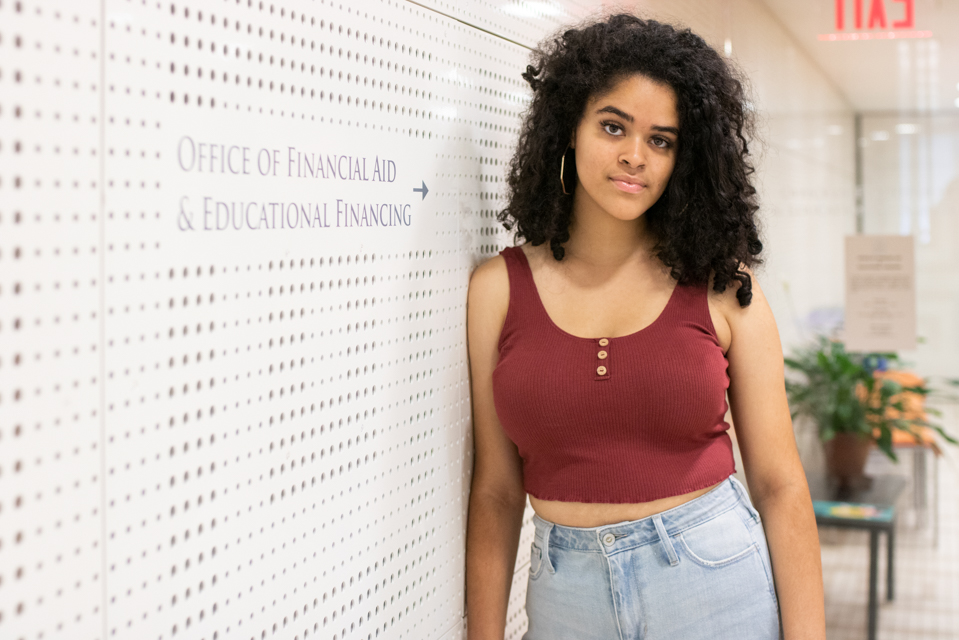 For low-income students, paying the student contribution can be burdensome, hindering professional advancement and straining mental and physical health.

As the first Questbridge Finalist to come from her high school, Alysha Acosta’s college application process was shrouded in uncertainty. The organization’s website, however, did make one thing certain—she would be provided with a “full four-year scholarship.”

When Acosta, CC ’22, found out she had been accepted into Columbia last December through the Questbridge college match, she believed that she wouldn’t have to worry about the cost of her tuition. But at a financial aid information session she attended in the summer of her first year, she learned of a cost that her scholarship did not cover: the student contribution.

While the purpose of the fee is not explicitly stated, every Columbia College and School of Engineering and Applied Science undergraduate receiving financial aid is charged what Columbia calls the “Student Contribution fee,” which gradually increases from $2,400 per year to $3,000 per year by the time the student is a senior—and the fee isn’t covered by any financial aid package, even those that claim to be full rides.

“If I would’ve been explained what Questbridge was … I don’t think I would [have attended Columbia]. Columbia gave me false hope. They were like ‘Oh yeah, a full ride. We’ll definitely help you out.’ But I'm still struggling,” Acosta said.

Questbridge—with whom Columbia is partnered—is a nonprofit that strives to identify potential low-income applicants and provide them with educational or scholarship opportunities at over 40 partnering prestigious universities, including Stanford, Princeton, and Yale. The organization offers full college scholarships, all-expenses paid trips to colleges, and other awards.

For low-income families, the Columbia grant of over $70,000 displayed on their financial aid package echoes reassuring messages from recruitment materials, admissions representatives, and financial aid advisors—that Columbia’s high price tag should not deter anyone from engaging with the academic, social, and intellectual components of the Columbia undergraduate experience.

While the Office of Financial Aid affirms their commitment to accommodating student circumstances surrounding the financing of their Columbia education, the standard implementation of the student contribution fee undermines their efforts by placing a financial responsibility on students who cannot afford one.

Since March 2008, Columbia College and School of Engineering and Applied Science have offered loan-free and need-blind aid, offering families with calculated total incomes below $60,000 full grants covering tuition, room, board, and mandatory fees.

For a family with the means to pay tens of thousands of dollars to finance their student’s future, the student contribution may not be a substantial amount to cover, particularly relative to the hefty tuition price tag.

But for low-income students, paying the student contribution can be burdensome, hindering professional advancement and straining mental and physical health.

For Acosta, this meant she had to balance providing for her family with finding a means to pay the contribution. Though she has steady income through her employment at the Columbia Student Calling Center, she had intended to use her income to support her six-person household in Patterson, New Jersey, paying medical and utility bills to support parents who could not spare the money.

But the grants required her to have secured an internship by the end of the fall, which she struggled to find despite extensive inquiry via Handshake and social media networks.

Further, the internships Acosta applied to are open to all students, regardless of their financial need. She had also heard of other students taking out smaller meal plans and using the refund to cover the student contribution, a scenario in which she felt the University’s message was “either you want me to pay it or starve.”

Because Acosta was accepted in the Academic Success Program—a cohort of 60 Columbia College and School of Engineering and Applied Science students who participate in a five-week academic preparation session prior to the start of their first year—she was exempt from paying the student contribution during her freshman year, which allowed her more flexibility to support her family. Acosta said she is already planning for next year’s contribution and anticipates the stress of balancing her familial responsibilities and academic interests.

“Last year, I needed to help my parents, but I knew that I could help them out. This year it seems a little more challenging to help them out and also pay [the student contribution]. I feel like I’m going to be a lot more stressed, especially with the workload I have,” Acosta said.

In a 2016 interview with the Washington Post, Dean of Columbia College James Valentini said he recognized Columbia’s role in accommodating the needs of a diverse student body by eliminating factors that prevent the success of undergraduates. But while he admitted that students could have financial difficulty even with full-grant aid, he does not believe the student contribution will ever be eliminated.

“If even a single student is having a problem at Columbia, then we feel bad about that,” Valentini said in the interview. “We try to address it.”

When asked by Spectator if the Office of Financial Aid considered further accommodations for low-income students regarding the student contribution, a Columbia spokesperson declined to comment.

Last semester, an emergency forced Karla Dejesus, CC ’22, and her family to relocate to another apartment—the cheapest option being $1,000 more than their former rent in the increasingly gentrified Chicago neighborhood of Pilsen. As a result, rather than receiving assistance from her parents, Dejesus had to actively contribute to alleviating the family’s financial burdens.

Through obtaining grants with the Center for Career Education, she was able to waive the student contribution and was awarded an additional $3,400 stipend which she would use to contribute her family’s rent and grocery bills while working at a local grassroots organization, doing activism she couldn’t have otherwise done without the grant money.

There was one caveat: The grant communicated with her organization that she would be expected to work 35 hours a week. The hefty time commitment forced her to contribute only a fraction of the money she could have earned if she could have taken up another job while organizing.

“Finding out I have to pay whatever money to Columbia kind of makes me mad because why should I? You promised me a full ride,” Dejesus said. “Sometimes I wonder if it's this way at all schools. Is Columbia my best bet? I have thought of transferring for personal reasons, but would other schools give me more money?”

Across the Ivy League, financial aid packages include an estimate of out-of-pocket expenses that students should consider or amounts that students are able to contribute to their parent’s contribution through work study—money that is managed by the student themselves. Columbia, Cornell, and Dartmouth are the only institutions that include a set amount to be paid to the school irrespective of the student or family contribution.

Melissa Cook, CC ’20, hesitates to call her financial aid package a “scholarship.” Cook did the math: It would take 13 hours a week over the course of a 3-month summer internship to make enough money to pay for the student contribution, if your employer pays $15 an hour, the minimum wage in New York City.

In order to pay the fee, Cook would have to work every summer and forget about the possibility of studying abroad or taking summer classes.

“I think that if they consider the different realities that students at Columbia face, it falls apart as being an egalitarian concept because it doesn’t make sense. Parents can pay this. There are no laws that force students to pay this—it’s a lot of money.” Cook said.

As an independent student, Cook said she is “barely managing” the student contribution. Because the grant she receives to attend Columbia covers the cost of attendance, she would be able to qualify for federal or private student loans. Even if she was willing to risk her credit and take out a personal loan—as suggested by the financial aid advisor—she would be deterred without a cosigner.

“Columbia should take into account that students like me go there and are accepted there. And make their documents so that they are understandable to people like me, not just people who know what to expect already from an Ivy League institution,” Cook said.

While there has been mobilization in the past, University Senator Heven Haile, CC ’21, hopes that the election of more low-income students to student government will call greater attention to and promote the possibility of abolishing the student contribution.

“It feels like Columbia is equating struggle with receiving an education,” Haile said. “The University's endowment is 10.87 billion dollars, so the fact that they can’t salvage 3,000-ish dollars per student is just ridiculous.”

Recently, hoping to bring more attention to the ways financial pressures hold low-income students back at Columbia, Haile asked students to relate their experiences with the student contribution on Facebook.

Mackenzi Turgeon, CC ’21, was one of the respondents. As president of the Columbia Quest Scholars Chapter, Turgeon regularly interfaces with the community of students who were accepted to Columbia through Questbridge. She wrote that the student contribution effectively discriminates on the basis of class, and that Columbia’s commitment to educational equity requires that it abolish the student contribution.