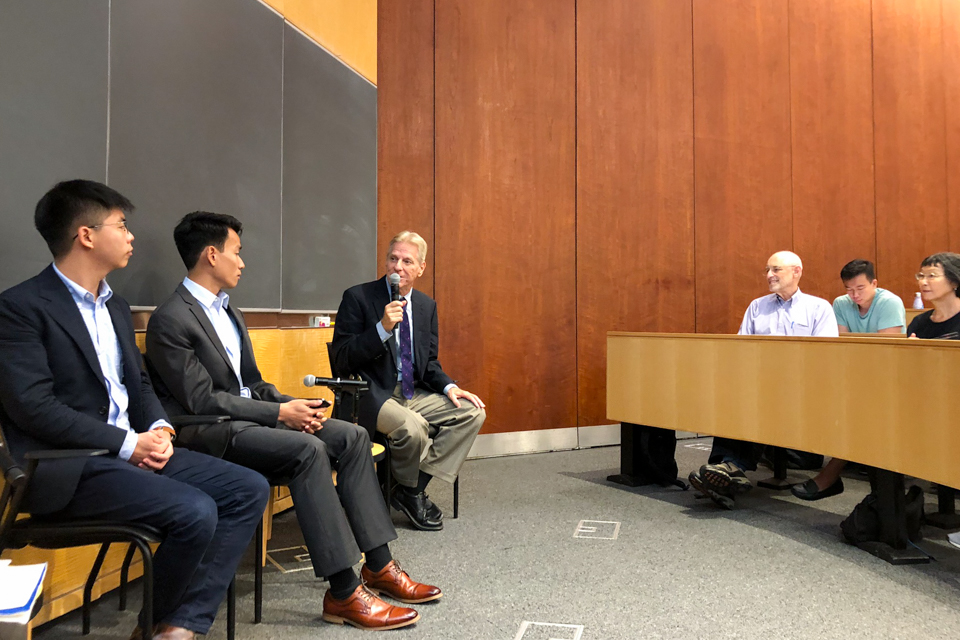 The two activists, Joshua Wong and Brian Leung called on the international community to support the democratization of Hong Kong.

In September 2014, thousands of student protesters flocked to the streets of Hong Kong after an announcement to implement reforms to the electoral system which would grant China’s Communist Party greater control over Hong Kong’s appointment of its Chief Executive, the highest elected office in the region. These thousands of unnamed faces flocked together, inadvertently instigating the Umbrella Movement, which would persist for the next three months.

On Thursday, two of those activists for Hong Kong’s independence visited Columbia for an event hosted by the Law School, speaking to hundreds of students on the importance of the power of student activism. The two activists, Joshua Wong, secretary-general of the pro-democracy party Demosistō, and Brian Leung, a graduate student at the University of Washington, called on the international community to support the democratization of Hong Kong.

“World leaders and the international community have a say on Hong Kong’s future,” Wong said. Wong and Leung’s appearance at Columbia is their first appearance in the United States since the June protests in Hong Kong. Their visit marks just one part of their journey, which also involves testifying in front of Congress on Tuesday to support the pro-democracy movement.

Leung and Wong’s visit to the University was facilitated by the Weatherhead East Asian Institute with the Center for Chinese Legal Studies. Moderator and Columbia Law professor Benjamin Liebman emphasized the importance of having conversations regarding freedom of speech at Columbia, particularly given the University’s unique history of facilitating and providing a home for discourse. University President Lee Bollinger has on multiple occasions highlighted the importance of promoting free and open debate on campus.

“We here at Columbia are uniquely positioned to foster conversations on difficult topics through respectful conversations,” Liebman said.

Throughout the talk, the political tension on both sides became clear—multiple members of the audience stood and sang the Chinese national anthem in response to the activists’ call for independence, and students gathered outside the Law School in peaceful protest.

Hong Kong, a semi-autonomous special administrative region of China with its own control over its parliament and currency, is also governed by the Beijing government which vets senior officials such as the Chief Executive. Currently, the people of Hong Kong are protesting what they claim is an authoritarian regime denying them the right to fairly elect their officials and protest peacefully. The resistance of the Hong Kong people toward the Beijing government falls under the Umbrella Movement, which has seen about one-fourth of the total population of the city mobilize for democracy.

The Umbrella Movement is named after protesters’ use of umbrellas to deflect the Hong Kong Police Force’s use of pepper spray. Power within the movement is decentralized, so there’s no one leader or organization that dictates the path of the movement.

Wong has played an integral role in the Umbrella Movement by founding Scholarism, a student-activist group against propaganda in education. Scholarism played a key part in getting youth engaged with the political climate of Hong Kong and was a place where young leaders gained enough exposure to shape parts of the overall movement. Now the secretary-general of Demosistō, Wong helps the party spread its platform of promoting sovereignty.

Leung, who has protested a bill that would allow criminals in Hong Kong to be turned over to mainland China, gained traction after being the only protestor who revealed his face to the Hong Kong legislature at great personal risk, given police brutality in Hong Kong. In his speech, Leung broke down the structural aspects of the Umbrella Movement to help listeners understand the movement and its engagement with protestors and the international community.

“[Hong Kong is] feeling the full force of authoritarian practice and the denial of liberal values, so we really, really need the international community to say ‘We defend Hong Kong’s values in terms of political liberalism and not just in financial liberalism,’” Leung said.

Wong also questioned whether the international society values Hong Kong solely as a liberal financial “hot pot” or whether other nations value and stand with it as a stronghold for political liberalism.

Leung added that the values of democracy and liberalism are at stake in Hong Kong, noting that international support is needed to end the persecution of peaceful protestors who are looking to exercise their natural rights.

“I believe if in the past three months the U.S. had more than one-fourth of the population take the streets, I believe the president would have resigned or stepped down already,” Wong said.

While discussing the current protests in Hong Kong, Wong and Leung responded to audience member concerns regarding youth involvement at the frontlines of the protests, particularly in light of some of the violent tactics used against protestors.

At the end of the talk, as students sang the Chinese national anthem, Leung and Wong shook hands with Columbia faculty, and were quickly escorted out of the building by security.