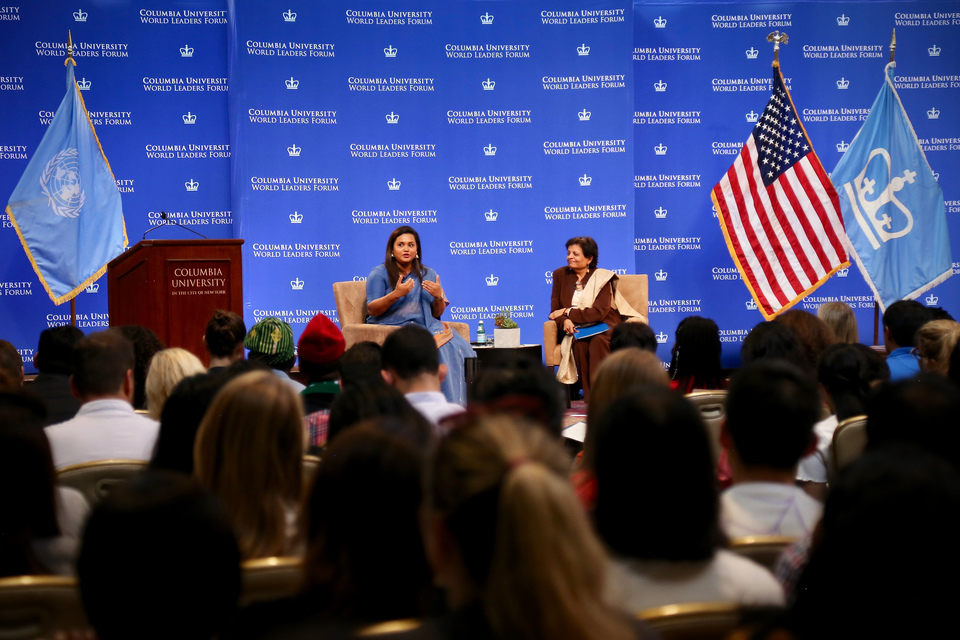 Wickramanayake is the second Envoy on Youth, appointed in 2017. At 26, she is the youngest senior official at the U.N.

United Nations Secretary-General’s Envoy on Youth Jayathma Wickramanayake spoke about the power of young communities to inspire change through connectivity in what she described as a rapidly changing and chaotic political climate on Tuesday as part of the Columbia University World Leaders Forum.

The event was co-sponsored by Columbia’s World Leaders Forum, a program in which Columbia invites high-level policymakers from around the world to speak, and the Committee on Global Thought, a 2006 initiative started by University President Lee Bollinger to enhance Columbia’s engagement with global issues. Wickramanayake’s visit comes in light of an initiative by the Committee on Global Thought titled “Youth in a Changing World,” which works with Columbia Global Centers to discuss pressing issues important to youth.

In her introduction, committee Chair Carol Gluck said the project is part of the way that Columbia is engaging with world communities and addressing global issues.

Wickramanayake is the second Envoy on Youth, appointed in 2017. At 26, she is the youngest senior official at the U.N. Before working at the U.N. she was the first Sri Lankan Youth Delegate to the United Nations. She was also a leader of a political movement called “Hashtag Generation” that engaged young Sri Lankans in politics.

She began by noting that youth is not a constant, the definition changes depending on time and nation.

With a Youth Climate Strike approaching on Friday and the U.N. Youth Climate Summit occuring on Saturday, Wickramanayake emphasized the role of youth in affecting change, highlighting young activists such as Greta Thunberg. Thunberg, a 16-year-old climate activist, recently made headlines by sailing from her home country of Sweden to New York for the U.N. summit.

Wickramanayake said she believes such worldwide youth movements mark a drastic change in the way generations have harnessed power to bring about change in their communities.

“There is a fundamental shift in the way today’s young generation use their power to bring transformational change. For generations before them power was something exclusive ... mostly white elites,” Wickramanayake said. ”It wasn’t something that was shared, it was something held in secrecy behind closed doors.”

She added that the current generation sees things differently and encourages them to enact change.

“For them, power is a concept that is disruptive, innovative … interconnected,” Wickramanayake said. “Power is transparency, not secrecy, and lies in mobilization, not in institutionalization.”

In response to a student question about how the U.N. can use its resources to reach into local communities, Wickramanayake acknowledged that the program as it is “isn’t fully representative” and lacks the voices of those who don’t have the resources to access the large cities where U.N. events usually take place.

She hopes to address this through a partnership with the YMCA, where she plans to use their infrastructure across 120 countries for internet sessions so that “even those who cannot participate physically” can be a part of the discussion.

Wickramanayake also hopes to “decentralize” the U.N. by moving away from a headquarters model through means such as creating youth advisory panels on the national level.

When asked what she most hopes to see come out of the upcoming Youth Climate Summit, she responded that she doesn’t want to influence anyone, but added that she has high hopes for the town hall session after the summit.

“[At the town hall session] young people will be given the opportunity to directly ask questions from the world leaders, and that’s where you hold the heads of states accountable and tell them ‘this is about our future so we want a stake in it,’” Wickramanayake said.