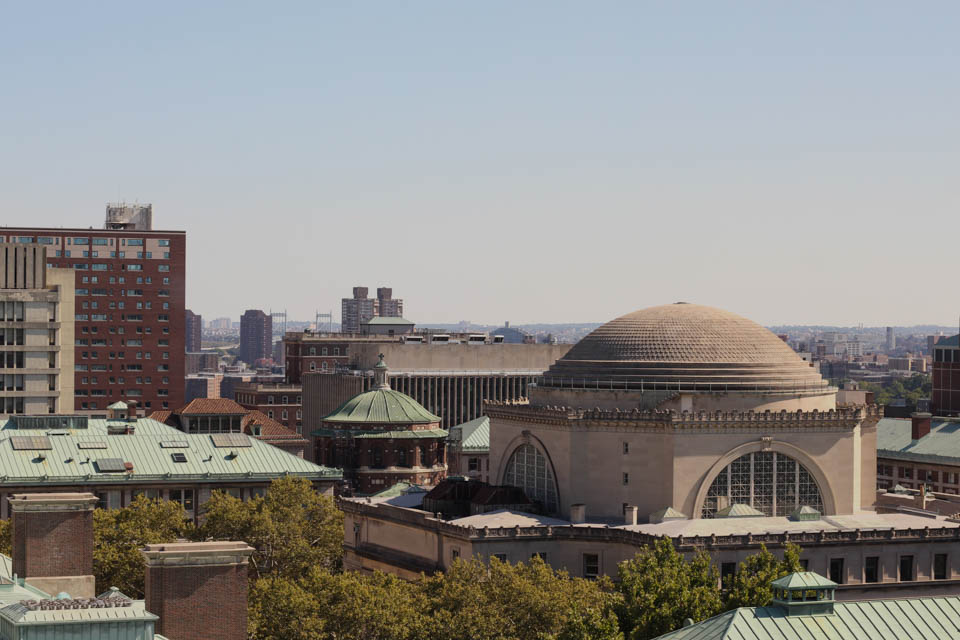 Columbia will establish two new task forces in the coming year to address climate change and how the University can serve humanity on a larger scale, University President Lee Bollinger announced in an email Thursday afternoon.

Bollinger has long prioritized the University’s role as a global institution, establishing initiatives such as Columbia World Projects, a program dedicated to applying University research to solve global problems, in April 2017. In that same month, the University also released its first-ever sustainability plan in an effort to implement more long-term sustainable transportation, energy use, and waste disposal practices.

The first of the new task forces is set to focus solely on the issue of climate change. In his email, Bollinger set out a list of possible questions that would be addressed by this task force, including whether or not the University was doing enough to investigate and remedy climate change, or if a “School of Climate Change” should be created in the future.

“These are difficult but also intellectually exciting questions,” Bollinger said in his email. “However, one thing is certain: The sheer magnitude of the problems now facing humanity as a result of climate change has never been greater.”

The announcement of the climate change task force comes at a pivotal time, as an updated and more thorough sustainability plan is set to release next year.

The Climate Change Task Force will be led by Alex Halliday, director of Columbia’s Earth Institute, with other members set to be announced in the next weeks. Bollinger wrote that he expects this task force to produce its first findings by December of this year.

As globally-minded as Bollinger proposed this task force to be, he also noted that it must examine the University as an institution in order to better identify how it can tackle global issues. In doing so, the task force will be reviewing questions of “disciplinary boundaries” and “policies of promotion and tenure.”

Ira Katznelson, interim provost and deputy director of Columbia World Projects, is set to lead this task force, with other members also being announced in the next few weeks. Bollinger has given this task force a longer timeline to produce findings, expecting results by the end of the academic year.

I am writing to announce two important initiatives to be launched this academic year. This is just a brief summary, with more information to follow in the next several weeks. Let me say at the outset, however, that these projects will test our capacity for institutional imagination and resolve.

The first initiative begins with the creation of a task force to consider what more the University should be doing with respect to climate change. We all understand that global warming poses enormous, perhaps even existential, challenges; that the issues it presents are confounding, complex and multidimensional, call on every area of human knowledge, and are enduring. While nations and the international community struggle even to begin to come to terms with this emerging reality, academic research institutions have been and are increasingly engaged, necessarily, with this subject.

With the seminal and superb science being carried out at the Lamont-Doherty Earth Observatory, as well as across the University broadly, brought together through the Earth Institute, Columbia has been, and is, at the very forefront of academic discovery related to climate change, its myriad impacts, and its remedies. Yet, it is important that we ask, as one of the leading universities in the world, are we doing enough? Are we marshaling our academic resources in ways that are proportionate to the magnitude and gravity of the challenges civilization will face? If we should be doing more, what would that entail and what structures within the University should be created to enhance our research, teaching, and engagement? Is it the right moment, for example, when a School of Climate Change should be created, uniting the academic efforts already underway, fostering new research and even disciplines, preparing the next generation of students through new degree programs in order to better serve the world, and signaling to the nation and the broader world how critical these matters are? Or are there other forms our new and invigorated efforts might take?

These are difficult but also intellectually exciting questions. However, one thing is certain: The sheer magnitude of the problems now facing humanity as a result of climate change has never been greater, and, accordingly, we—as a singularly capable institution in this sphere—have a very serious responsibility to redouble our efforts to advance our knowledge and to help identify solutions and recommend courses of action.

I have asked Alex Halliday to lead this Climate Change Task Force. Members of the task force and various working groups that will be part of this review will be announced in the next few weeks. My hope and expectation is that we will produce preliminary findings by December 1, 2019.

A related and very significant second initiative also involves a task force and will focus on how to extend Columbia’s abilities to bring the extraordinary knowledge and capacities of the University in tandem with the wider academic community and actors beyond the campus to more effectively address pressing human problems.

In the last two years, Columbia World Projects (CWP) has led a University-wide effort to experiment with how to institutionalize this ambition of uniting academic capacities with agents of change, all in service to the public good. Its initial cohort of thoughtfully cultivated projects is in the first stage of being launched. These efforts by CWP are building on, and working with, many parts of the University—engineering, medicine, public health, social work, international and public affairs, the Earth Institute, and so on—that long have emphasized the merger of research and action. Within Arts and Sciences, in addition to our professional schools, there also exists a wide array of relevant efforts on which to build. In this sense, our challenge is not just to launch what does not exist, but also to galvanize sensibilities and efforts that many colleagues share and to look thoughtfully and creatively at key features of our institution’s organization and arrangements so that we may eliminate impediments and encourage ready impulses. But there is also a need to think through the role of the University, as such, in meeting the needs of humanity.

This is, in my view, the Fourth Purpose of universities, standing alongside the better understood missions of research, education, and public service. It constitutes an evolutionary step in the centuries-long development of these extraordinary institutions.

For us to examine this matter seriously and comprehensively, we will need to confront all of the elements that make us who we are and then identify what we need to change or supplement in order to make us what we might be. These include the economic model of the modern research university and how it imposes an organization on our mission; existing disciplinary boundaries and how they both help and impede the achievements we seek; and our systems and methods of appointments, including the practices and policies of promotion and tenure. What might be done to magnify our opportunities—and, indeed, our responsibilities, especially at this moment in history—to help bring deep knowledge to the world we serve, and, in so doing, enhance the vectors of university research, teaching, service, and impact? This task force will seek to answer this question.

The task force on facilitating the Fourth Purpose will be led by Ira Katznelson, with members to be announced shortly. We expect to report on our findings and recommendations by the end of the academic year.

Let me conclude by saying how grateful I am to everyone who will participate in these extremely important inquiries and how much I look forward to the discussions and recommendations that will follow. As always, the premise of whatever we do, as one of the foremost research universities, is that it is a very serious matter to the world.