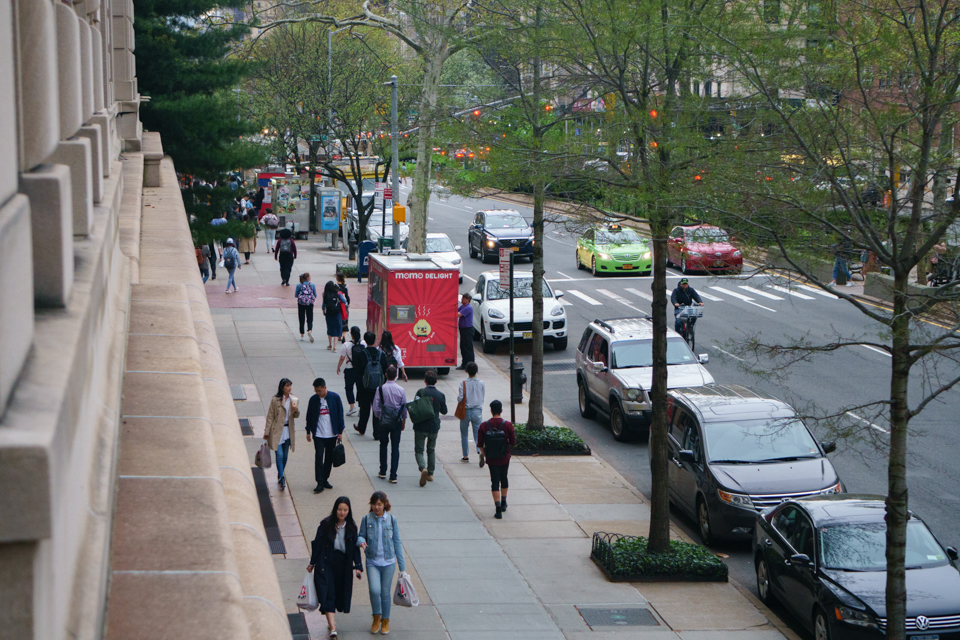 With a growing student body and a stagnant classroom inventory, the Faculty of Arts and Sciences has been increasingly compelled to look elsewhere for classroom spaces.

With a growing student body and a stagnant classroom inventory, the Faculty of Arts and Sciences has been increasingly compelled to look elsewhere for classroom spaces—including event spaces in Lerner, the Kraft Center, and buildings more than a mile from Morningside Campus. Without a clear solution, the growing pressure has led faculty, students, and administrators to question whether Columbia must eventually abandon its historically centralized campus for one that sprawls across Morningside Heights and, more and more, into West Harlem.

Historically acknowledged to be the core of the University, the Faculty of Arts and Sciences—comprised of Columbia College, the School of General Studies, the School of the Arts, the School of Professional Studies, and the Graduate School of Arts and Sciences—has found its facilities under significant strain, both in regard to their need for renovations and their limited numbers. Faced with a state of constant budgetary insecurity, some faculty within these schools attribute this financial state to large-scale University projects, such as the $6.3 billion-dollar Manhattanville campus, which draw Columbia’s main resources away from the Morningside campus.

Notably, though student enrollment has increased dramatically—nearly 20 percent for undergraduate schools alone—over the past decade, classroom inventory has remained largely stagnant for the same period, according to University Registrar Barry Kane.

These enrollment pressures have also been seen uniquely by Arts and Sciences. The School of Professional Studies has increased its enrollment by nearly 70 percent since 2009, and the School of General Studies by nearly 40 percent.

As a result, the University Registrar has looked at buildings such as International House, Riverside Church, and the Union Theological Seminary to lease spaces for classroom usage. Three classrooms in Riverside Church were added to the Registrar’s inventory of classes just this year, and according to Kane, conversations about leasing from the Medical Campus arise each year, though they have yet to be seriously considered due to the distance. 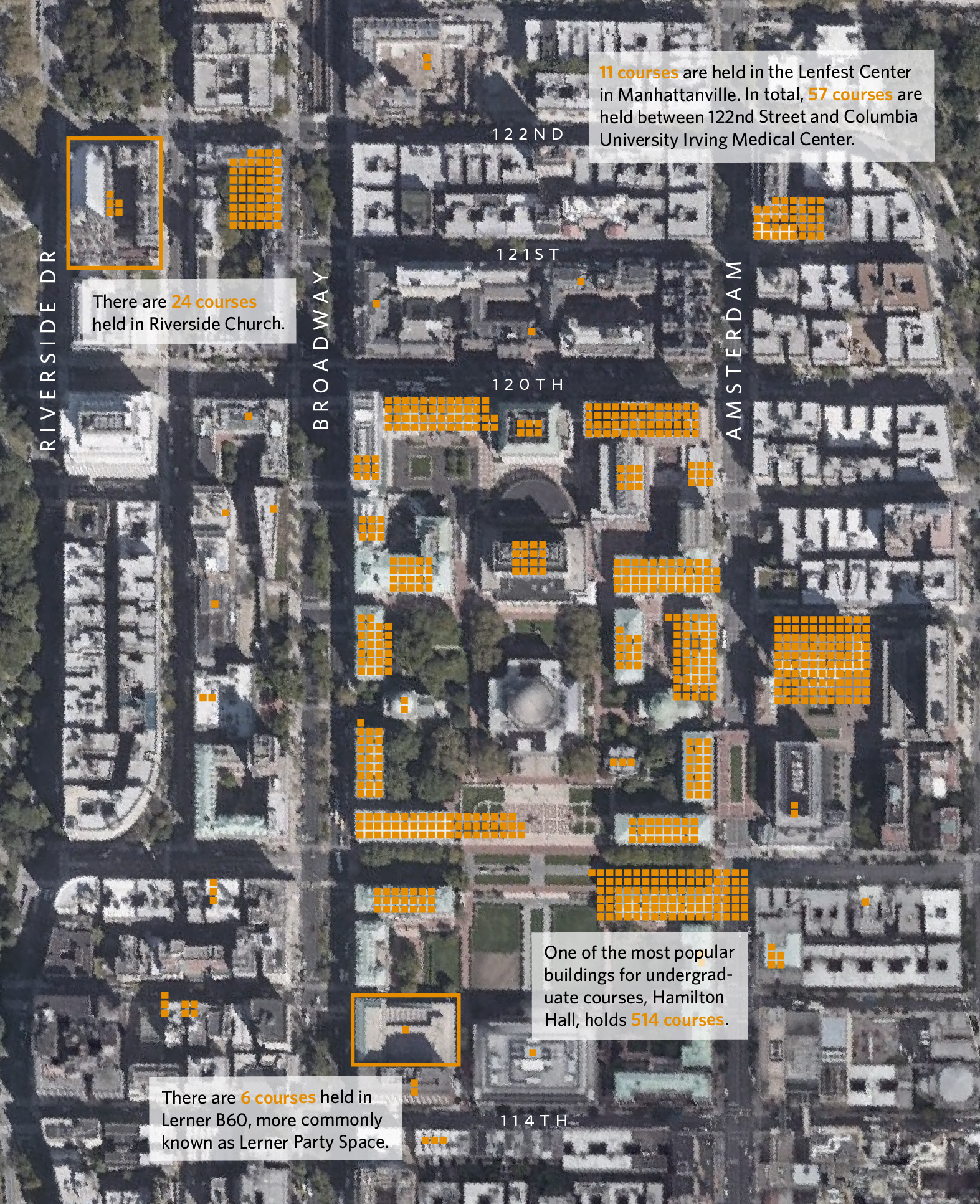 “Like other universities … Columbia is increasingly facing space constraints, heightened by its location in an urban city,” Kane said. “Every year, we work to lease and find spaces elsewhere in a number of locations … to best accommodate our priorities in finding the best fit for a faculty’s needs.”

For students, the distance—though not an impossible walk—can serve as a deterrence from enrolling or going to class.

Emma Gometz, CC ’21, said she was looking forward to taking an introductory film course during her first year. Her University Writing course, located in Philosophy Hall, ended at 1:55 p.m., and the film course began at 2:10 p.m.

When she found that the film class was located in the Lenfest Center on 129th Street, she realized she wouldn’t be able to make it on time. Though the course had to be placed in Lenfest because of its film screening room, the 15-minute slot wasn’t enough time for Gometz to make the walk—she would have to arrive at least five minutes late.

“I don’t hate walking far since I’m a New Yorker, but it wasn’t a reasonable amount of time for me to make it to class on time. Especially if more courses are moved to Manhattanville for undergraduates, that’s going to be a frustrating problem for a lot of people,” Gometz said.

Gometz claimed she spoke to her professor to ask if she could arrive a few minutes into class, but he declined the request. In the end, she dropped the class.

In light of an expanding campus boundary, Kane acknowledged that faculty and students may need more time to travel beyond campus. Ultimately, Kane said, the University may need to consider a new master schedule to expand the time between courses.

For Brock Thompson, CC ’21, and Lex Baird, CC ’21, the 20-minute walk to their 10:10 a.m. history course has at times deterred them from attending class in the morning.

Though the class was originally scheduled to be in the International Affairs Building, World History Since World War II was moved to the International House at La Salle and Riverside Drive before the second day of class.

“It’s tough,” Thompson said. “I have to wake up a lot earlier. If I had an 8:40, I don’t know if I could make it. But today I didn’t end up going, just because I didn’t want to make that walk all the way over there.”

Both acknowledged that the walk wasn’t too far—just far enough to make their morning commute a hassle and deterrence for attendance.

“Having to drag myself out and then having to walk a mile-plus just to get to class is definitely not the best start to the day,” Baird said.

Though Slavic languages professor Cathy Popkin has not faced issues with commute time between courses this semester, she noted that the relocation of classrooms and lack of space on campus has impacted academic life for both faculty and students.

“It’s frustrating as a professor to see students drop classes due to facilities or classroom problems,” Popkin said. “There’s just a tipping point—there’s too many classes, too many students, and not enough space.”

Kane referenced Uris Hall, which is slated to be vacated by the Business School in 2021—a move originally scheduled to occur by 2020—as a central solution to classroom space shortages within Arts and Sciences. But the building is still in need of costly renovation and, without any potential funding in sight, is years away from having modern classrooms fully equipped to hold classes.

He emphasized, however, that the University Registrar continues to work with faculty and departments to best match classroom allocations to teaching styles.

“This office is attuned to the academic mission of faculty and Columbia as a University. … No matter the difficulty of what we do, we’re doing our best with a great team that truly cares,” Kane said.