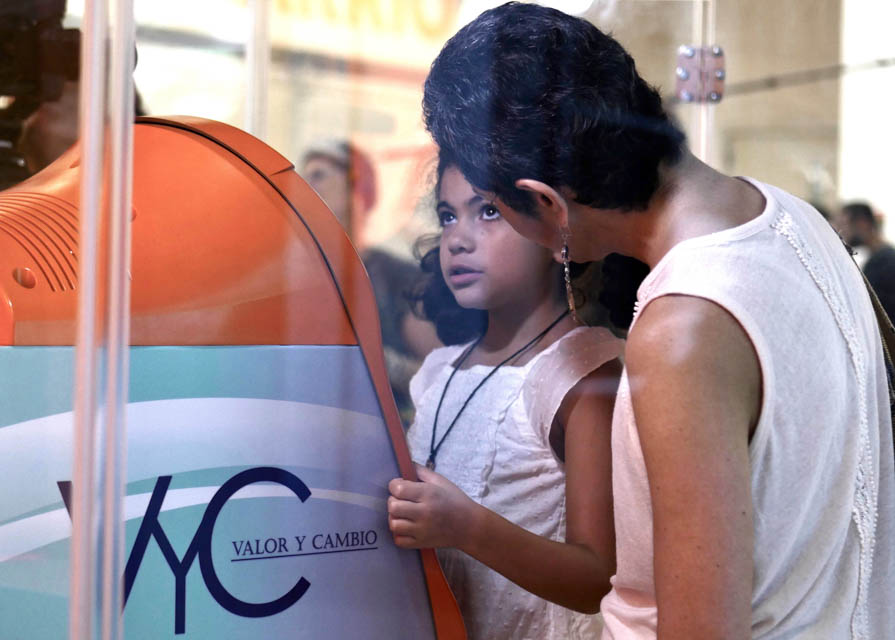 With the involvement of the Columbia community in the project, students have cited “Valor y Cambio” as evidence of how faculty can tie their global connections to their teaching methods in innovative ways that extend beyond the traditional classroom setting.

After working for three years on the Unpayable Debt in an effort to develop new frameworks for thinking about the role of debt in our economy, Puerto Rican filmmaker, scholar, professor of English and comparative literature, and former Director for the Center of Ethnicity and Race Frances Negrón-Muntaner began assembling what would become her first art project: “Valor y Cambio.”

Negrón-Muntaner aimed to foster a conversation about more than just Puerto Rico’s debt crisis: a decades-long financial crisis that has been aggravated by the passage and aftermath of Hurricane Maria. Recognizing the lack of spaces for people in Puerto Rico to talk about the issues the island still faces today, Negrón-Muntaner, along with artist Sarabel Santos-Negrón, decided to use art to create a platform that would allow for these exchanges to occur.

“I learned that, in a lot of the debt crisis and austerity contexts that I had studied, artists had played a major role in creating, imagining, and providing spaces to practice alternatives to what was going on,” Negrón-Muntaner said.

This resulted in an interactive installation where participants could share stories about what they value by talking to an ATM. After recording, and in exchange for, participants’ answers to three questions on what they value, the machine dispenses at random one of six bills, or “pesos of Puerto Rico.” The creative team documents participants as they await and then receive their “peso,” and it plans to compile and transcribe the footage in order to release a report after the end of the project’s run.

The name “Valor y Cambio,” then, adopts both definitions suggested by the Spanish word “cambio,” as the phrase can translate to both “value and change” and “value and exchange.”

The installation began in Puerto Rico and is currently touring East Harlem. Negrón-Muntaner has not discarded the possibility of bringing it to Columbia.

Students involved in the project have cited “Valor y Cambio” as evidence of how faculty can tie their global connections to their teaching methods in innovative ways that extend beyond the traditional classroom setting. Negrón-Muntaner’s efforts indirectly address questions about Columbia's relationship with Morningside Heights and on how to forge productive academic and professional connections.

“She's brought so many people together who wouldn't have otherwise met, and a lot of young people at the start of their careers. She is not only a mentor to them but lets them be collaborators in a really unique way. … I'm not sure a lot of professors would really give that latitude to undergraduates in the same way she does,” Elisabetta Diorio, CC ’20, the video editor for the project, said.

The “pesos” feature Puerto Rican historical and cultural figures, such as poet Julia de Burgos and baseball player Roberto Clemente, as well as the Martín Peña Channel communities. While these figures do not necessarily promote the same views on what Puerto Ricans should focus on or what questions they should prioritize, all of them, or “el conjunto” as Negrón-Muntaner put it, give participants an “entry point” into discussing the issues that affect them.

What the “pesos” represent for participants, whether they are or are not Puerto Rican, varies. A bill can contain a story that validates their experiences or, instead, one they’ve never encountered before and can explore. But taken together, they stimulate conversation and reflection among participants about the values that are being promoted in one’s environment and about the existing communities that are supporting those values.

Negrón-Muntaner’s initiative has also provided those working on the project, including those in the Columbia community, with opportunities to reflect on and redefine what they value.

Diorio has been working with Negrón-Muntaner for three years as a digital media assistant at the CSER’s Media and Idea Lab and is now editing the footage for “Valor y Cambio.”

“It has made me reflect a lot on community-building and the importance of people sharing spaces and conversations and how valuable and generative that can be,” Diorio said. “Editing the videos and working on the project, I've just seen how it's moved so many different people—people cry and are overjoyed. And there are a thousand videos that we've been going through [of] people just talking about what they value, and to see the number of people that this project has impacted has been really transformative for me.”

For Diorio, “Valor y Cambio” has also made her reflect on the significance of the space Negrón-Muntaner has created at Columbia.

“She's setting forth a very unique way of teaching that doesn't exist in many spaces at Columbia, one in which students learn not by simply gaining knowledge from her,” Diorio said. “Projects like this in the Columbia setting provide students a very special and unique space to engage with projects and ideas in a really mature way that's not necessarily what you get to do as a student in any other setting. I think the way it has transformed the students' lives is really interesting.”

Though there have been opportunities to explore the project and involve students at Columbia, Negrón-Muntaner hopes to continue fostering conversations about engagement and community, something she herself values and believes is essential.

“We always learn a lot,” Negrón-Muntaner said. “Each place is totally different. We look forward to learning about what people value and how that could inform more our lives and our public policies … and how we relate to each other.”