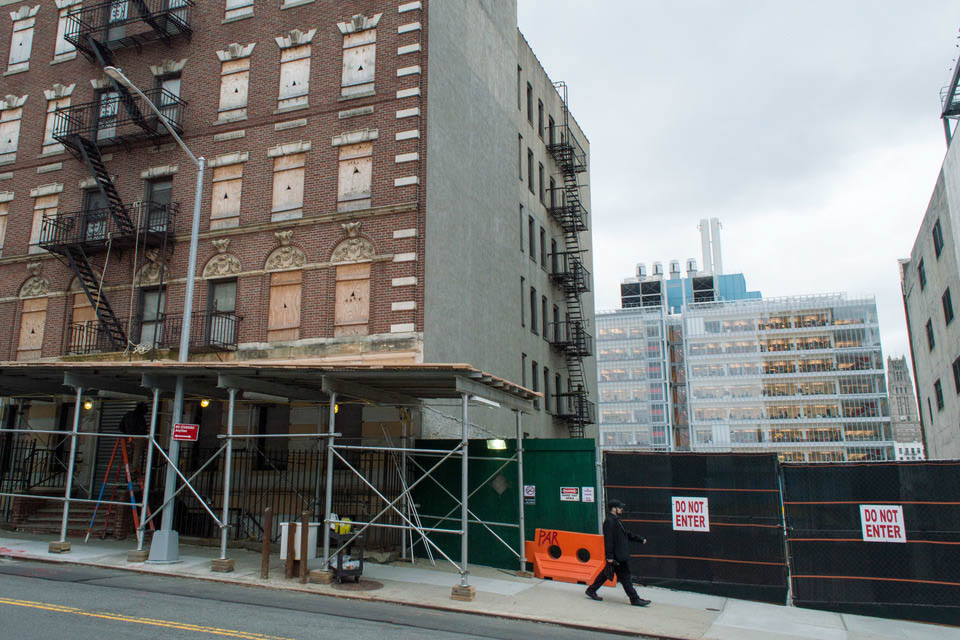 Zoning plans haven’t been updated for Morningside Heights in over 50 years.

When Union Theological Seminary needed funds for a massive campus renovation, it turned to 350,000 square feet of land that it decided it could afford to sell.

The cost of land is particularly high in Morningside Heights, where rent prices increased by nearly 80 percent from 2010 to 2015. Additionally, zoning regulations in Morningside Heights—unlike in surrounding neighborhoods—have no restrictions for building heights, meaning that vacant land in Morningside Heights has a high potential for profit. Businesses and private companies willing to pay millions, as a result, can build towers that reach unrestricted heights.

Residents have attributed limited vacant space, relaxed zoning policies, and demand in the community as the reasons behind upward rent pressure and lack of affordable housing.

The Morningside Heights Community Coalition, an organization in which local stakeholders work to improve Upper West Manhattan, proposed a Rezoning Plan in 2018—which recently garnered support from local City Council members—that would limit the development of upscale apartments, promote affordable housing, and preserve the neighborhood’s character. To the dismay of many, New York City’s City Planning Commission recently rejected the coalition’s proposal. This was the second time the community attempted to change the zoning plans, which have remained unchanged since 1961.

According to the West Harlem Development Corporation, an organization tasked with overseeing money Columbia has committed to benefiting the local community, only 4 percent of Community Board 9, the district encompassing Morningside Heights, is currently vacant, which makes it difficult for the community to create affordable housing. The University’s agreement stems from its own 17-acre expansion into Manhattanville, which has been criticized for displacing longtime residents. Beyond the new high-rises casting shadows over the neighborhood, the Manhattanville project is credited with increasing rent pressure for an estimated 1,300 residential units.

For residents, the proposed changes to the zoning plan would mean more affordable housing options and protection from unconstricted high rise and luxury apartment developments. At an MHCC-hosted town hall on Friday where over 100 local stakeholders convened to have an open dialogue, several community members expressed that under the current iteration, residents have borne the burden of gentrification and increasing tax rates.

The proposed zoning plan—faced with pushback from City Planning—includes limiting the height of new buildings and increasing density along some avenues to invoke Mandatory Inclusionary Housing, which requires developers to provide some affordable housing units as a part of new construction.

Currently, there are 23 sites in Morningside Heights that are vulnerable for development, most of which are owned by local institutions, according to the MHCC.

“I want to briefly remind you of what the stakes are,” Levine said. “This is an island of vulnerability here in Morningside Heights.”

MHCC members have been aware of their susceptible position and pushed their rezoning proposal, gathering over 1,000 signatures in support of the plan.

Despite their efforts, City Planning denied their proposal because it did not find a sufficient need for rezoning, said MHCC member Robert Stern in an interview.

Stern said City Planning’s decision was misguided because it is not looking into the impacts of the numerous institutions on the community.

“The institutions in Morningside Heights are selling off their land and air rights to developers because they can profit off of it,” he said.

Representatives from City Planning were not available to comment.

Corey Johnson, City Council Speaker, said at the meeting that Mayor Bill de Blasio resented the City Planning Commission’s decision to reject the rezoning proposal and that City Council will work with the community to hire a private consultant to get its plan pushed forward.

“This is a historic moment that you have just witnessed,” MHCC President Laura Friedman said at the meeting. “This is the first time someone understands us—someone has heard us.”

While City Council members have voiced support for rezoning, formal plans remain unclear for the next phase of passing a rezoning plan, especially due to already developing high-tower luxury apartments and institutions.