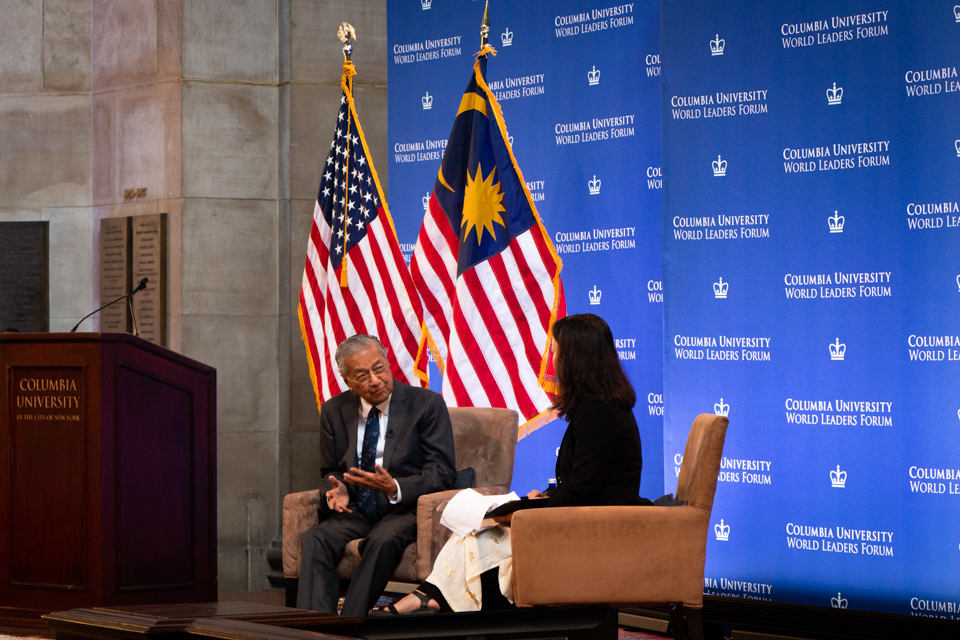 Malaysian Prime Minister Mahathir bin Mohamad discussed racial tensions and government corruption at an address for the Columbia World Leaders Forum in Low Library on Wednesday. The event was widely criticized prior to Mahathir’s arrival due to his past anti-Semitic remarks.

The World Leaders Forum is a year-round assembly that invites heads of state and political leaders to speak to students regarding major international issues.

Mahathir—who, at age 94, is the world’s oldest head of state—served as the prime minister of Malaysia from 1981 to 2003 and ran against the establishment party last year after a 15-year break from office. His incumbency is focused on creating racial equality through affirmative action, cleaning up corruption, and paying back the national debt.

Wednesday’s event faced significant media attention, with critics citing Mahathir’s comments about Jewish people, including remarks about how they are “hook-nosed,” as evidence of the University’s anti-Semitism. During his address in Low, Mahathir also questioned the number of Jews killed during the Holocaust.

This is not the first time the University has invited a controversial figure to speak at the World Leaders Forum. In 2007, Columbia hosted former President of Iran Mahmoud Ahmadinejad, a Holocaust denier with a history of human rights violations.

Amid the criticism, University President Lee Bollinger has continuously asserted the need to listen to and engage with public discourse. A prominent First Amendment scholar, Bollinger has built his tenure on the basis of strengthening free speech at the University, even publishing an op-ed in response to President Trump this June, asserting that he supported his student critics.

However, Jewish students at the University have expressed concerns for their safety because of anti-Semitism in the recent past. In November 2018, a Jewish professor’s office—which was subject to anti-Semitic vandalism in an incident in 2007—was again vandalized with swastikas and slurs.

Last week, Columbia Students Supporting Israel sent a letter to Bollinger asking him to either cancel the event or disclose the prime minister’s views. They also started a petition last week that garnered almost 3,500 signatures, with over 1,000 of those signatures coming in the last two days.

Bollinger responded to the group with a letter that the Office of University Life later published on Monday.

“Public engagement can sometimes be difficult, even painful,” Bollinger wrote. “But to abandon this activity would be to limit severely our capacity to understand and confront the world as it is, which is a central and utterly serious mission for any academic institution.”

Many students, however, were still not convinced by the University’s decision.

“By hosting the prime minister we, as a prestigious institution, are giving credibility to a leader who supports anti-Semitism in his country,” Ofir Dayan, president of Columbia SSl and GS ’20, said.

In his own address, Mahathir discussed how multilateralism, or collaboration among multiple nations, is now inevitable on the international stage. He also claimed that Malaysia’s booming and dynamic economy can be seen as an example of success to other Southeast Asian countries.

In the Q&A portion, Romy Ronen, JTS ’21, asked the prime minister about his previous anti-Semitic remarks. Mahathir defended himself, stating that he has a right to criticize Jews because they are able to criticize him.

“I am exercising my right to free speech,” Mahathir said in response. “Why is it that I can’t say something against the Jews when a lot of people say nasty things about me?”

Attendee Gareth Thorlakson, CC ’22, said in an interview after the event that he supported the decision to invite Mahathird to campus because he thinks students should be exposed to the domestic and foreign realities of other countries and regions.

“I think [the event] allowed for people to ask about his anti-Semitic comments,” he said.

Yaira Kobrin, president of Columbia and Barnard Hillel and CC ’21, said she still wished the University did more to denounce his anti-Semitism at the beginning of the event.

“Free speech means that the prime minister can say anything he wants without threat of imprisonment,” Kobrin said. “It does not mean that he, or the University officials who brought him to campus, are free from the moral implications of his speech.”