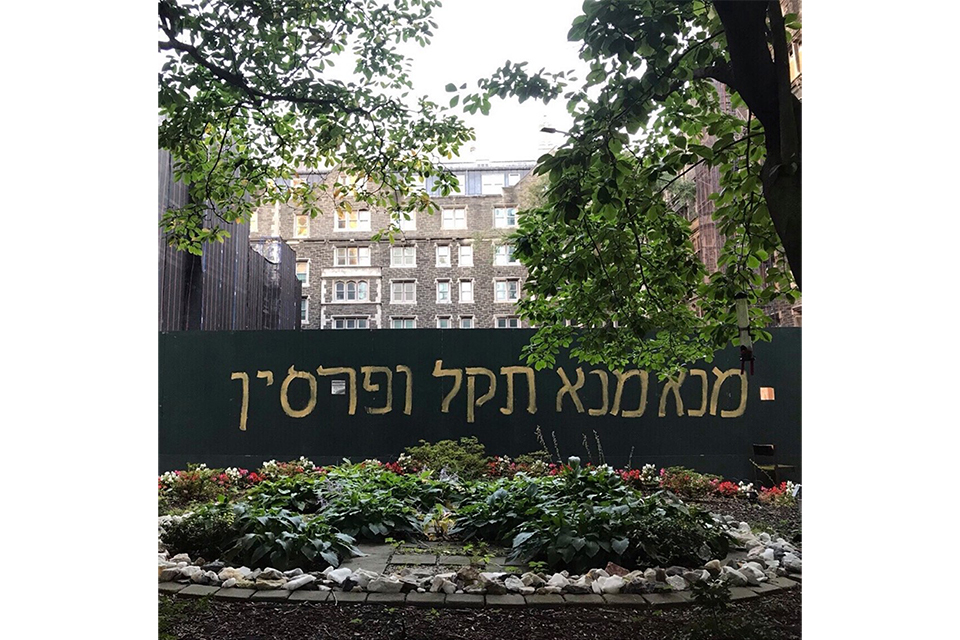 Four years after the cash-strapped institution decided to sell its property to a developer for $125 million, it is now listed to become a 42-story multi-use building with limited faculty housing.

Union Theological Seminary has had its fair share of student protests in the last 50 years in response to ongoing campus renovations that critics say will disrupt student life and limit campus space.

Four years after the cash-strapped institution decided to sell its property to a developer for $125 million, it is now listed to become a 42-story multi-use building with limited faculty housing on the bottom floors and luxury condominiums above the eighth floor. Coupled with outdated zoning regulations in Morningside Heights, the developers now have free-range to build a tower that would nearly match the height of Riverside Church.

On the night of Sept. 26, UTS students took to the construction site of the high-rise and painted the wall with a bible verse to show their discontent over the school’s decision to sell the land.

According to Harmeet Kamboj, a member of the group WhoseUnion, which planned the protest, initial plans for campus renovations and the high-rise began in 1987. At that time, the seminary faced pushback from students, though no plans were concretized until UTS sold the land in 2015. Students have since begun to protest again, as construction on the project began in August.

According to UTS’s website, selling the land was a necessary step to take at the time because of the estimated cost of repairing the poor conditions of the building would escalate over time. It lists other options including “do nothing” and “change mission and dramatically downsize” to provide comparisons for what it deemed to be worse alternatives.

“The endowment funds that provide scholarship, faculty, and administrative funds would be cut in half in to cover these renovations,” the website says.

When construction started on the tower in the summer, students said they were displaced from on-campus housing, a portion of UTS’s quad was cordoned off, and 100-year-old trees were uprooted.

As part of a wider campus renovation project, Hastings Hall was closed for the school year and was anticipated to reopen in August, according to a UTS spokesperson.

Students were asked to move to McGiffert Hall, International House, or the housing provided by the Manhattan School of Music in the interim. Currently, McGiffert is the only on-campus option available to students.

James Admans, a student organizer and second-year graduate student at UTS, moved into Hastings last year, but quickly found alternative housing when he was informed that he would not be able to live in the building long-term. He moved months later, with regrets of losing the connections he made with students in Hastings.

“Union has a big emphasis on community, and part of that is being able to live with each other on campus,” Admans said. “A lot of incoming students don’t get to live on campus because already existing students had priority.”

In addition, Kamboj said the construction site has hindered student life, since a large portion of the quad is blocked off, and that, in the future, strangers will be living in an on-campus location.

“The tower will take up a significant portion of campus and half of our quad will ultimately be erased as a result of the tower construction,” she said. “One hundred years of history will be marred by folks who can afford the luxury condominiums.”

Kamboj also expressed concerns over the impact of building luxury condominiums in the neighborhood.

“There will be damaging effects of people in Harlem due to the increase of gentrification in the neighborhood,” she said. “The black community has faced rent price increases and displacement in recent decades and it will be exponentially worsened when wealthy people flood in.”

UTS declined to comment on any concerns regarding the decision to sell part of its campus.

“As an institutionalized union that advertises itself as social justice oriented, I could not stand by silently,” Kamboj said. “Several of my peers in the community have expressed similar concerns and similar callings, and we quickly formed a coalition to revise efforts that have gone on for the project.”

A verse from Daniel 5 was scrawled across the construction site wall to mimic the writing on the wall as cited in the text. The message was intended to leave a foreboding message similar to the arrogance and waste that was spelled out in Daniel, according to a WhoseUnion Facebook post.

“Union Theological Seminary—you have been weighed and found wanting,” the Facebook post read. “The student body is divided. The quad, divided. Our gentrified neighborhood, divided. The days of Union as we know it, or would like to know it, are numbered.”

UTS administration noticed the graffiti and covered it up with paint the next morning. It declined to comment on the recent student protests.

The graffiti was the second act of protest the group organized this year, with the first being a disruption during a chapel service on Sept. 19. Three student demonstrators held out a banner across the balcony of the chapel that read, “Woe to them who build their seminary by unrighteousness, their luxury condos by injustice. Jer. 22:13. Stop the tower!”

Admans said UTS’s administration is not doing enough to acknowledge the student protests on campus.

“We don’t think it’s too late to speak up until the building is done,” Admans said.