For award-winning journalist Maria Hinojosa, BC ’84, returning to Barnard is a dream come true

For award-winning journalist Maria Hinojosa, BC ’84, returning to Barnard is a dream come true 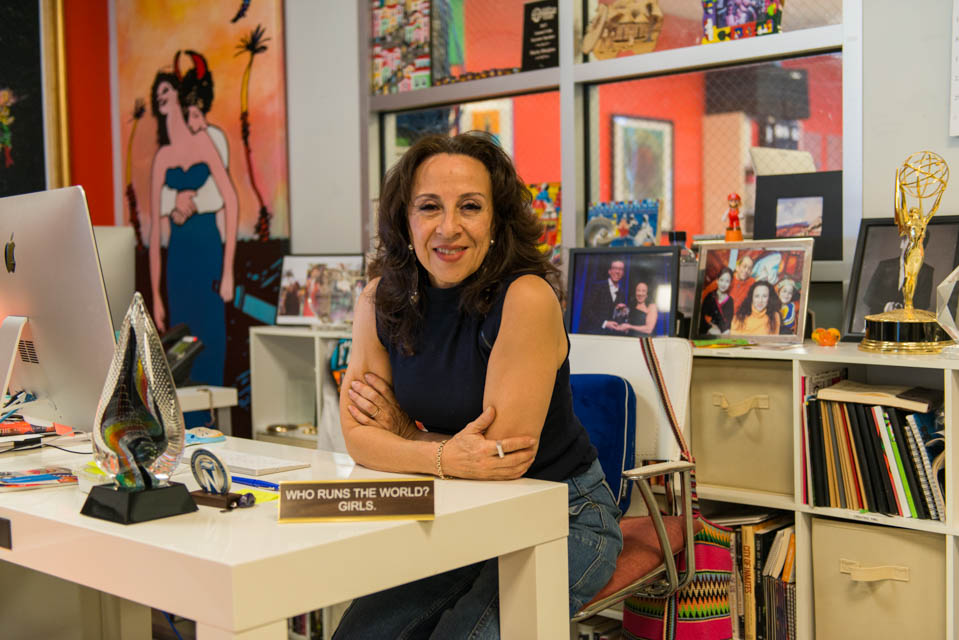 Maria Hinojosa was the first Latina ever hired at NPR.

At the offices of Futuro Media Group in the heart of Harlem, Maria Hinojosa, BC ’84, and her team of journalists are busily preparing for the next day’s interview.

Tomorrow’s guest is the Latino rapper Pitbull. This is par for the course at this nonprofit media group, which Hinojosa founded 10 years ago as an alternative to the white and male-dominated spaces that are prevalent in the news media industry.

Hinojosa has won four Emmy Awards over the course of a 34-year career in journalism that has brought her from NPR to CNN to PBS and, ultimately, to Futuro. Now she has returned to Barnard as the college’s first Journalist-in-Residence, where she is teaching two classes in the English department: “Creative Writing on Trauma” and “Latinx and the ICE/Prison Industrial Complex: Access and Strategies for News Coverage.”

“As we continue to expand our academic offerings and adapt to the diverse interests of our students … I can think of no better journalist to develop this residency program and mentor students who share her passion,” Barnard President Sian Beilock wrote in an announcement in August.

Among other important landmarks in her life, Hinojosa pointed to her time at Barnard as a pivotal moment in launching her as one of the nation’s most successful and celebrated Latina journalists.

In particular, Hinojosa told Spectator, it started with a conversation with an adviser.

“Even though I was a major activist on campus and was doing radio [at WKCR] and producing 24 hours of women’s programming, I still didn’t think that I was good enough to be an American journalist,” said Hinojosa, who was born in Mexico City and grew up on the South Side of Chicago. “And somebody in the Barnard College career service offices told me to apply to an internship at NPR, because I didn’t think I was going to make it, and she was like, ‘Of course you are!’”

After graduating from Barnard with a degree in Latin American studies and minors in political science and women’s studies, Hinojosa moved to Washington, D.C. and was the first Latina ever hired at NPR. She eventually moved to CNN, where she covered seismic events such as 9/11 and the explosion of the Columbia Space Shuttle in 2003, and joined PBS in 2005 as a senior correspondent for the program’s newsmagazine NOW.

When PBS cancelled Hinojosa’s Emmy-winning talk show “Maria Hinojosa: One-on-One” in 2009, however, she reached a turning point in her career.

“[At this point] I’ve won so many awards, and I’m going to go work for a man? Because many of the senior editorial positions are often men. So I was like, do I want to do that?” she recalled. “I just thought about many Hollywood women actresses who have created their own production companies, and I was like, maybe I can create my own journalism, and do it independently.”

Ten years later, Futuro Media Group is a national news and production company based in Harlem that produces successful shows like “Latino USA” and “In the Thick,” and collaborates and competes with mainstream outlets like NPR, ProPublica, and WNYC. The space is centered around and led by women, particularly women of color.

“We believe that you can run newsrooms in this way that is representative, and it’s not that hard,” Hinojosa said. She is the only Latina running a nonprofit newsroom in 2019.

For Hinojosa, who grew up in a Mexican immigrant family that regularly watched the news on television but rarely saw journalists who looked like them or reported on the stories that mattered to their communities, her identity is a central part of how she approaches and understands other people.

“This sense that I was something of an outsider in this country, even though I was raised here, allowed me to understand being able to tell stories from that perspective. In some ways, everyone is ‘the other,’” she said. “When I think of my journalism, I think, what might have moved me [and my family]?”

Returning to Barnard as a professor was a longtime dream of Hinojosa’s, but not one that she ever expected to become a reality.

“It was that dream where you’re looking up at the clouds, and you think, wouldn’t it be awesome to be a professor at Barnard, and teach journalism?” she said. In the meantime, she became a professor of Latin American studies at DePaul University in Chicago in 2012, mentored by her close friend and fellow Latina journalist, Cecilia Vaisman, BC ’84, who died after a battle with breast cancer in 2015.

“Cecilia was my first suitemate, Argentinian from New Jersey, and I was Mexican from Chicago, and we became the best of friends,” Hinojosa recalled. They worked together at NPR after graduation and kept in close touch as they both became prominent journalists. For Hinojosa, being back at Barnard is also a powerful reminder of the intimate friendship that the two women shared.

“I really feel like in some ways she was also a big part of this. Life is not guaranteed, so there was that notion that somehow I could give back to Barnard, she and I both. That first day of class, she was everywhere. She was so present,” Hinojosa said.

Barnard announced that Hinojosa would be joining the faculty as a professor in August, just before the beginning of the 2019-20 school year. Hinojosa called the news “a dream come true” and said that she hopes to provide her students with a sense of empowerment and encourage them to embrace the opportunity of taking classes with Barnard women.

While walking across campus and listening to music on the second day of class, Hinojosa said, she was struck with how grateful she felt to be back at Barnard.

“I don’t know what song came on, but I was seriously just dancing down College Walk,” she said. “And then I told my students that I was trying to embody the joy that I have, and make them understand that this thing of being at a place like Barnard is really special. I’m in heaven.”