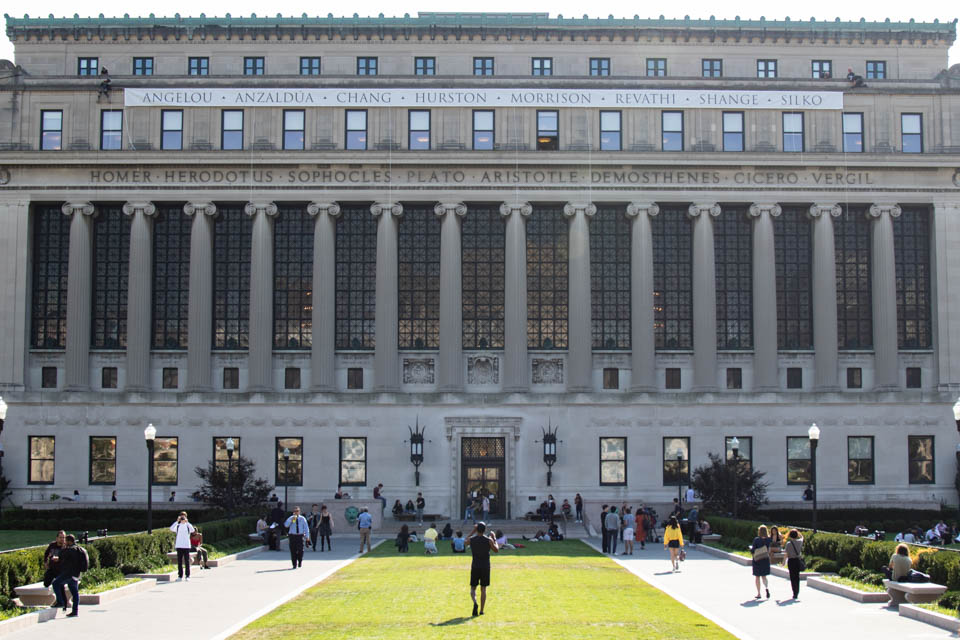 The Butler Banner Project hung a banner displaying the names of eight female-identifying writers above the names of male writers on the facade of Butler Library.

In 1989, Laura Hotchkiss Brown, GS ’89, attempted to protest the lack of female inclusion in Columbia’s curriculum by hanging a banner above the names of male writers on Butler Library. The banner—made by Brown and four of her friends—featured the names of eight influential female writers.

But before Brown and her friends could finish, they were interrupted by campus security, and the banner was removed.

Five years later, in March 1994, another group of Columbia students created a banner, this time featuring the names of 10 female authors in celebration of Women’s History Month. The sign was hung briefly on Butler’s facade, this time remaining up without interruption by security.

And 30 years after the initial protest, Columbia Libraries approached Elise Fuller, CC ’19 and vice president of policy in CCSC at the time, with another proposal—to organize a third banner and demonstration to honor both Brown and female literary works.

On Tuesday afternoon, members of the Butler Banner Project hung a banner bearing the names of eight female-identifying writers above the names of the all-male writers on the facade of Butler Library. The banner will be displayed for the remainder of the fall semester.

Founded in 1919 in the midst of political upheaval after World War I, the Core Curriculum was instituted to facilitate discussions about the human experience in a set of courses initially to be implemented across Columbia College. Literature Humanities and Contemporary Civilization, two of the most foundational Core courses which focus on the Western canon, are frequently criticized for their syllabi comprised of works predominantly written by white men.

In the midst of the celebration of the Core Centennial yearlong celebration, the Butler Banner Project worked with Columbia Libraries to address concerns regarding the exclusion of female authors from Western literary canon. The project’s team began by surveying the Columbia College student body to ask who should be included in the banner, receiving over 200 responses, all with five to six names as suggestions.

This year’s banner includes Maya Angelou, Gloria E. Anzaldúa, Diana Chang, BC ’49, Zora Neale Hurston, BC ’28, Toni Morrison, A. Revathi, Ntozake Shange, BC ’70, and Leslie Marmon Silko, all female-identifying people of color who offer perspectives largely different from those offered by authors included in the Core. Morrison is the only author on the banner currently featured in the Core curriculum, with her book Song of Solomon having been added to Literature Humanities in 2014.

According to Keziah Anderson, CC ’20, and a project curator, the banner was also intended to make up for the shortcomings of the original 1989 banner, which included only the names of white women, and to highlight writers who are not included in the Core Curriculum’s “Western canon.” The selected writers have explored topics ranging from queer theory to black motherhood and encompass various genres, including poetry, novels, and essays.

Anderson emphasized that the team’s main goal with selecting these writers was to include a diversity of backgrounds, as well as a diversity of mediums.

“I think it’s really about acknowledging that there are other canons that are just as valuable to our learning process as the one that is canonized here,” she said.

On Wednesday afternoon, the project’s leaders held an opening event which featured a speech by project leaders on the history of the banner and readings from texts by each of the eight authors. The audience of over 50 people included contributors to the project, Columbia University Libraries employees, and interested students.

Project’s leaders Radhika (Rads) Mehta, CC ’22, and Augusta Owens, BC ’22, discussed in an opening speech the need for the primary texts used by the university to reflect the current diversity of the school.

Event attendee Zoe Ewing, CC ’21, heard about the project from her friends and appreciated the mission of showcasing the voices of underrepresented authors.

“I think that there’s this very authoritative association with the idea of a Western canon, so the fact that you’re included implies that you’re smarter or have more to say,” Ewing said. “So, when we don’t include marginalized groups in that it implies that they have less valuable contributions to society, which is obviously not true.”

Sarah Samuel, BC ’19, and current SEAS graduate student, agreed that students should read from texts that reflect the many different identities, including those outside their own.

“I think it’s important to let the canon reflect the demographic of the school as well, because clearly Columbia does not look the same as it did when it was founded, and it’s important to recognize that,” Samuel said.

Mehta said she hopes that the banner helps encourages students to question the decision of the Core Curriculum to include some texts and excludes others.

“The idea is to not just automatically buy into what Columbia presents you,” she said. “It’s to see that there are other views and other voices that should be heard, even though they haven’t been given that platform to be heard.”

While Fuller has since graduated from Columbia and will no longer work on organizing the banner project, she is confident that it will continue the conversation around the inclusion of diversified voices on campus.

“I think what we’ve started has really laid the groundwork for later generations of Columbia students and Barnard students,” she said.

For the remaining of the semester, the Butler Banner Project will host a series of events including one book club meeting for each of the authors and discussions around topics ranging from “Iranian Feminist Legacies and Prospects to A Diasporic Perspective” to curriculum syllabi revisions by former Literature Humanities chair in “Revising the Core: A Talk by Julie Crawford."