Only 8 percent of Manhattanville construction workforce hours go to local residents. One program aims to change that.

Only 8 percent of Manhattanville construction workforce hours go to local residents. One program aims to change that. 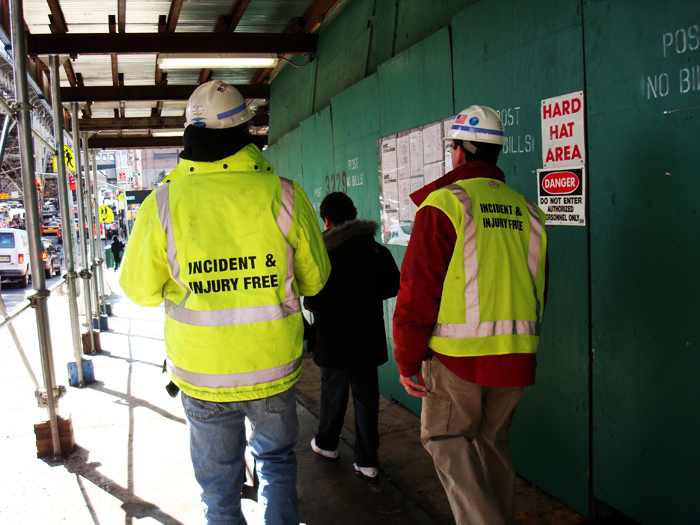 For many local residents in West Harlem who hope to find a job in construction—either as newcomers or as long-time workers looking for opportunities—one of the most prominent jobs in the area remains out of reach.

For many local residents in West Harlem who hope to find a job in construction—either as newcomers or as long-time workers looking for opportunities—one of the most prominent jobs in the area remains out of reach.

Last week, Community Board 9 strategic planning committee, a city advisory board representing Morningside Heights, met to discuss the scarcity of resources available for local workers to get hired at Manhattanville construction sites, citing a lack of programs and the University’s policy of hiring only unionized workers.

Columbia’s 17-acre Manhattanville expansion has been under construction for the last eight years, and will continue for at least another decade. As part of the Community Benefits Agreement, which has allocated money and resources to aid the community, the University has committed to having 40 percent of all work hours completed by minority, women, and local workers. As of last year, the University had exceeded their goal for underrepresented minorities.

In total, however, only eight percent of time spent—about 306,000 workforce hours—went to local workers.

“People wait in lines that stretches across blocks to apply to the union when these jobs come up,” Boateng said.

As a result of the obstacles, the WHDC created Pathways 2 Apprenticeship, a nonprofit that works with labor unions and organizations to bridge the gap between resources provided by the University and getting community members hired at Columbia construction sites, in 2016.

P2A received Direct Entry status in 2018, meaning the residents they train can avoid long processes in place when joining a labor union, according to their website. The five-week, full-time pre-apprenticeship program offered by P2A provides training for general construction skills and opportunities to learn a trade while working.

Abdulla Craft, a 34-year-old West Central Harlem resident, noted that there seem to be a number of barriers to finding construction work through a union, many of which are addressed through the P2A program. A safety certification, for example, normally costs upwards of $60.

“It seems like an easier way to do it, especially if I don’t have to pay for the fees like OSHA-30, scaffolding, and all that,” Craft said.

“They’re setting you up, they’re giving you the tools and you can set up an interview with the union, it seems easier,” she added.

That year, P2A hosted their inaugural class and have since helped 40 community members, 30 of whom are now working construction jobs and at least one of whom is working at Manhattanville construction sites, Boateng said.

While the goal is not necessarily to get locals to work on the Manhattanville project, Boateng said he hopes the program will get more residents employed at Manhattanville sites.

The University has partnered with P2A since its inaugural class of 23 residents, 17 of whom were from West Harlem and 15 of whom were formerly incarcerated, according to the University website. As of June, three of the graduates were accepted to unions.

Despite the University’s policy of primarily hiring unionized workers, Columbia has negotiated terms with local unions and organizations to ensure $25 million of work under the CBA’s Project Labor Agreement be performed by nonunion workers, minorities, women, and local firms.

As a result, minority/women/locally-owned business owners and construction workers can work without assenting to any labor union agreements, University spokesperson Victoria Benitez said in an email statement.

In the program’s third iteration, Boateng said, over 150 people have expressed interest and came to the information sessions to fill about 25 spots.

“We understand that Columbia University might not have the space for more crew members, so let’s just get our community trained first,” Boateng said. “Get them employed, and over time the unions will come to us and want to hire our students and then build our partnership with the University.”