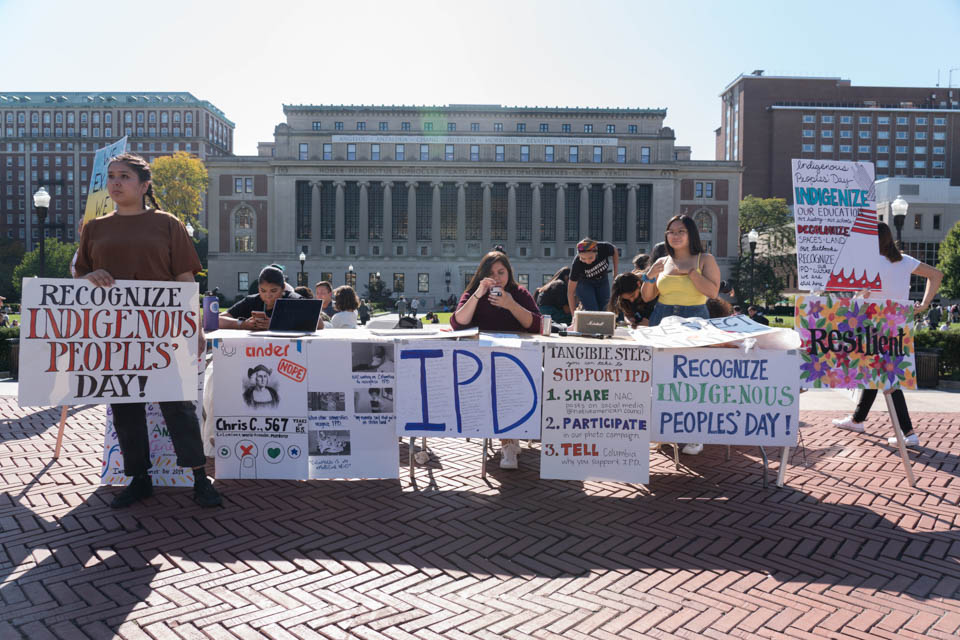 The Native American Council gathered at the Sundial to urge Columbia to recognize Indigenous Peoples’ Day as a University holiday.

In light of Columbia’s failure to name Indigenous Peoples’ Day as an official University holiday, Columbia’s Native American Council organized a day-long gathering at the Sundial on Monday rallying students to pen statements to the University Senate advocating for official recognition.

According to the Facebook post for the event, NAC sought to celebrate “Indigenous excellence by recognizing the achievements, resilience, and historical injustices survived by Indigenous peoples” and replace “the valorization of Christopher Columbus with the memorialization of the peoples who were the most adversely affected by the violence and colonial activity set into motion by his arrival in 1492.”

Signs spread out along College Walk conveyed the mission of NAC, displaying the names of missing and murdered Indigenous women and phrases such as “Recognize Indigenous Peoples’ Day,” “Columbus was a Murderer,” and “We Exist, We Resist, We Rise.”

Hannah Jimenez, CC ’23 and NAC member, attended the protest to advocate for the recognition of Indigenous people at Columbia and the historical obstacles that have shaped their presence at Columbia.

“A lot of people think that once Columbus came to the Americas everything ended for Native Americans, but it didn’t,” Jimenez said. “We’re still here, we’re still thriving, we’re still at institutions like this, so we just think that it’s vital to be recognized.”

According to NAC, these demands are part of their dedicated efforts to recognize the “land of Manhattan as the traditional home of the Lenape and honoring their perseverance in the face of colonial invasion.” In 2016, Columbia installed a plaque in front of John Jay Hall dedicated to the Lenape people following requests made by NAC for three years.

NAC has since been working with the Student Affairs Committee and the Office of Multicultural Affairs to present the proposal in front of the University Senate in hopes of achieving official holiday recognition. On Sunday and Monday, Columbia student groups such as the Black Students’ Organization, UndoCU, Engineering Student Council, and Columbia College Student Council released statements and posted on social media to share their support for NAC and impel Columbia to recognize Indigenous Peoples’ Day.

In an email sent to the student body on Monday, the Student Affairs Committee explained that it had established a recent partnership with NAC to draft a resolution to recognize Indigenous Peoples’ Day, specifically as it relates to the dispossession of Indigenous land currently occupied by Columbia.

“Today, we celebrate the achievements and resilience of Native communities and use our position to amplify the voices of Indigenous students on campus. Currently, in collaboration with the Native American Council, we are crafting a resolution in the Columbia University Senate to officially recognize Indigenous Peoples’ Day,” the statement said.

Lael Tate, CC ’20, the current co-president of NAC, wrote the proposal last year with Abigail Hickman, CC ’21, to mobilize the council’s call to action and demand accountability from the University. Along with a phase one request to recognize Indigenous Peoples’ Day, the proposal outlined future requests NAC would present to the University.

The second phase of the proposal asks faculty to practice traditional land acknowledgments at University events such as Commencement and Convocation. It also calls for a lecture series dedicated to Ella Cara Deloria, an Indigenous scholar who attended Teachers’ College, to display a commitment to Indigenous scholarship. The third phase calls for Columbia to hire more Indigenous advisors, create an Indigenous office or program to advance the Native community, and put more resources into recruiting Native students such as a scholarship.

According to Tate, the demonstrations offer solidarity for Columbia’s Native population and urge the University to shift responsibility for educating the community from Native students to the University itself.

“It’s one, to really help Native students to know that they are welcomed here and this is a place for them, and then also for the University to have the commitment to supporting Indigenous students and educating the rest of the campus about Indigenous issues so it’s not just on Native students,” Tate said.

Zeriyah James, CC ’22, added that NAC and the demonstrations it holds every year on Indigenous Peoples’ Day allow for visibility of Columbia’s Native community despite it being a minority in Columbia’s student population. Native students account for the smallest known ethnic group on campus, making up 3 percent of the class of 2023.

“I’m Navajo of Dine so I grew up on the reservation my whole life, so I have been around Native people my whole life, basically. It was kind of weird coming here because everyone else is not Indigenous and NAC is really helpful, but it has been good to be around Indigenous people and be seen for once.”

Morgan Brown, CC ’20 and NAC co-president, stated that it is important for the University to acknowledge its historical involvement in Native issues.

“Recognize Native people, their contributions, and also the fact that there were people here,” Brown said. “There was a society, families, and communities here, and they were totally displaced.”