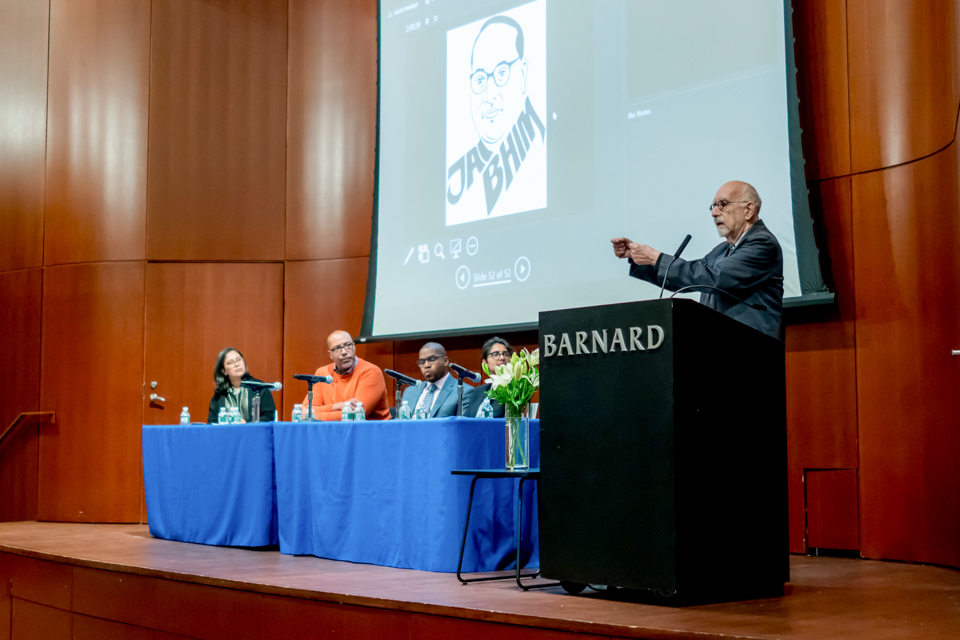 Bhimrao Ramji Ambedkar, the namesake of the lectures, was an Indian social reformer who campaigned for the dismantling of the Indian caste system.

During “Race, Caste, and American Pragmatism,” the first event in the second annual Ambedkar Lectures, a panel of faculty from various universities discussed the rigidity of the American social structure and how racial oppression in the United States reflects a social caste system.

The event was hosted by Anupama Rao, the associate director of the Institute for Comparative Literature and Society. Bhimrao Ramji Ambedkar, the namesake of the lectures, was an Indian social reformer who campaigned for the dismantling of the Indian caste system. He received his master’s degree and Ph.D. in economics from Columbia in 1915 and 1927 respectively, as well as an honorary degree in 1952.

“[Ambedkar’s] time at Columbia, in proximity to Harlem, appears to have spurred a [life-long] interest in thinking about the crisis of dehumanization across history, and an interest in developing remedies to address the problems of society’s most marginalized,” panelist Fred Harris, divisional dean of social science at Columbia, said in his introductory statements.

Citing Ambedkar’s work, the lecture aimed to use the caste system as a way to examine the rigidity and lack of mobility afforded by American race relations. Panelists shared papers placing Ambedkar in conversation with prominent 20th-century American intellectuals including John Dewey and W.E.B. Du Bois.

Krishnamurthy noted that Ambedkar’s work discussed similar ideas as that of Du Bois, as the two had been in correspondence and exchanged letters. Du Bois also addressed the idea of a caste system, describing that it first existed in America in the form of slavery, and later in the disenfranchisement of black people.

In reference to social formations that distinguish “white” versus “non-white,” Rogers emphasized that—like in Indian caste systems—white Americans defined their race by contrasting their whiteness to the skin of their “dark counterparts.”

In his speech, Lebron explained that the typical white experiences “do not include being shot by police, being denied jobs because of their name, being ridiculed for their ethnic hair, [and] having a hard time being taken seriously in hospitals.”

“There are difficulties, and then there are black difficulties. … Those difficulties result in a nation whose system of social value is broken and corrupt,” Lebron said.

Moody-Adams noted that all the intellectuals cited throughout the event believed that pursuing justice required both imagination and hope, which she defined as distinct from optimism. She highlighted the importance of “radical hope,” or the “hope that we hold onto … even when the world makes it seem, at least from the outside, entirely unreasonable.”

“It is the fact that the African American struggle for justice is so deeply rooted in this commitment to radical hope that it’s been able to have such a remarkable influence on social movements around the globe, including on Ambedkar’s efforts to dismantle the caste system in India,” Moody-Adams said.

Katznelson remarked in his closing statements that Columbia, and America as a whole, is at a crossroads: Established social structures are disintegrating, but new ones are not yet formed. He pointed to the fact that Columbia has historically been a space for the education of white men, but has seen a drastic shift in its student body in recent decades.

“I think for the next quarter-century or more of this society … we’ll hopefully, not certainly, be able to transcend the old sufficiently … so that we no longer can say that the American caste system—the racial caste system—is the most degrading system of social organization that we know,” Katznelson said.

The Ambedkar Lectures will conclude on Oct. 18 with “Remaking Publics: Gender, Affect, Insurgence, Presence.” From Oct. 24 to 26, the New School will host the Fifth International Conference on the Unfinished Legacy of Dr. B.R. Ambedkar. The theme of this year’s conference is Dalits in Global Context: Rethinking Gender and Religion.