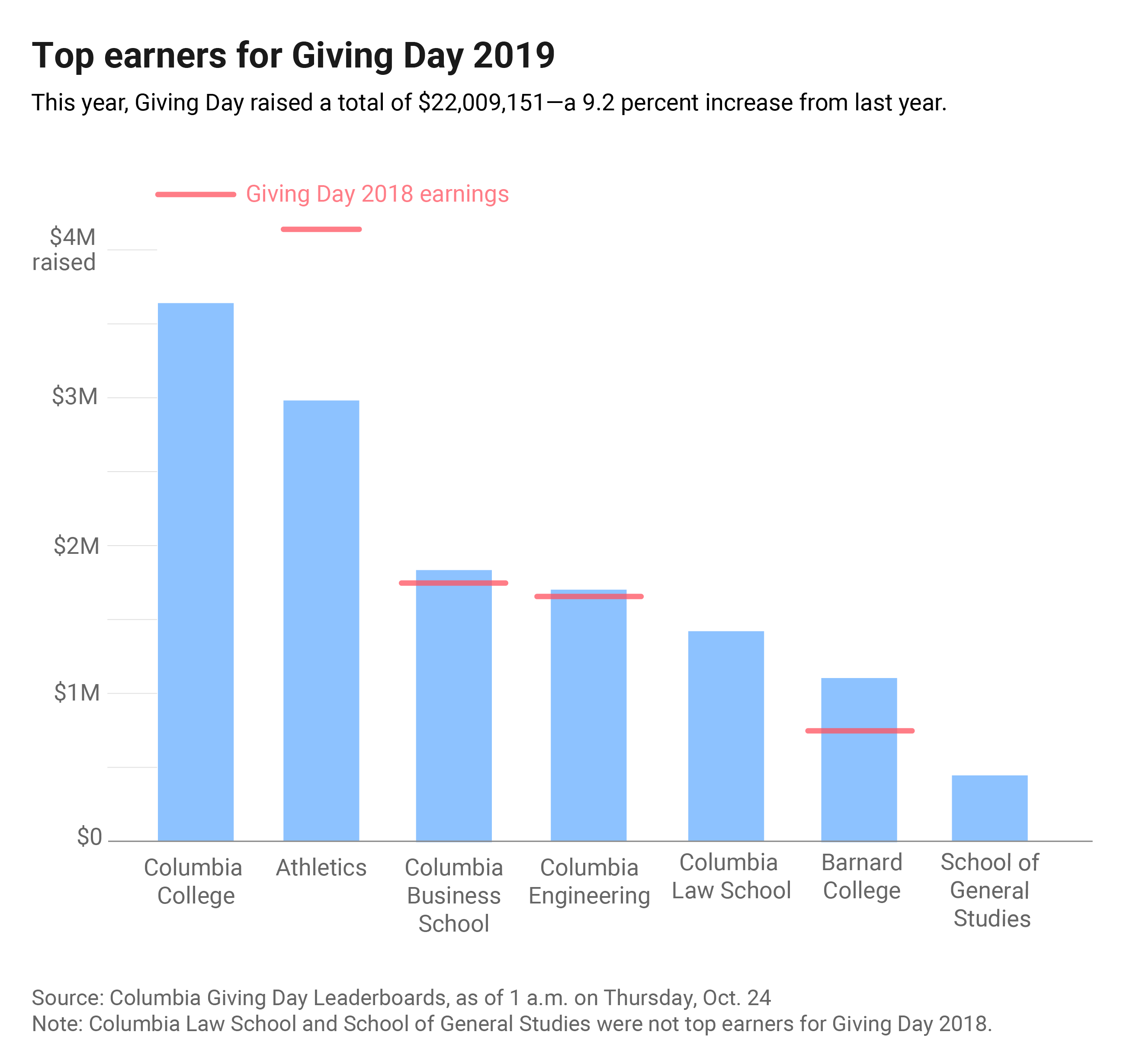 Despite being the top two earners for the eighth year running, CC and Athletics each saw their respective fundraising totals fall by hundreds of thousands of dollars compared to last year’s giving day.

In its eighth annual Giving Day, Columbia raised $22 million through 18,622 donations as of 1 a.m. on Thursday morning, surpassing last year’s fundraising totals by over $2 million. This year’s top earners were Columbia College, followed by Columbia Athletics and Columbia Business School.

Despite being the top two earners for the eighth year running, Columbia College and Athletics each saw their respective fundraising totals fall by hundreds of thousands of dollars compared to last year. In contrast, the School of General Studies and Barnard saw massive increases from last years’ totals—38 percent and 48 percent, respectively.

The School of Engineering and Applied Science saw its donations increase slightly.

Giving Day asks alumni, students, and parents to donate to specific schools, initiatives, and departments of their choice. The fundraiser hosted a variety of daylong and hour-long challenges for top leadership spots, with winners earning money for the cause of their choice. Columbia Business School, for example, won the Most International Gifts challenge from 8 to 9 a.m.

In alignment with Columbia’s global mission to develop solutions for real-world problems, the website encouraged donors to support global crises like climate change and income inequality. Donors could also give directly to Columbia Global Centers, which offer global opportunities for students and faculty at satellite campuses.

Giving Day donations, which will be made available immediately, help to subsidize costs not covered by Columbia’s endowment or tuition funds, according to the website’s FAQ page. Donors must give at least $10 during a 24-hour period. Donors can also give stock or donor-advised funds to a specific cause of their choice.

Columbia College and Athletics both saw significant decreases in fundraising, with the College amassing $3,641,745, which is $718,000 lower than last year’s record-breaking total. Athletics raised $2,978,730, a decrease of over $1 million compared to last year.

General Studies raised $445,537, compared to $322,526 last year. Similarly, Barnard raised $1,109,186, beating its previous record by a quarter-million dollars and meeting the million-dollar goal it had set for Giving Day.

“Our efforts to expand alumnae and parent engagement has aided in our ability to foster a number of initiatives that allow our students to fully focus on their academics and professional goals,” Barnard’s Vice President of Development and Alumnae Relations Lisa Yeh wrote in an email to Spectator.

Columbia has recently increased its efforts to involve students and help establish a sense of community around Giving Day. In Lerner Hall, students could create origami and send notes to first-time donors. They could also help choose where some challenge funds are directed.

“In the time before Giving Day, there was never a time when you would see people on campus in the lobby of a building writing notes ... to say thank you for gifts,” Jerry Kisslinger, the executive director for communications with the Office of Alumni Development, said. “Part of the messaging … isn’t just from some central point, but it’s really taken up and built out to whole networks.”

In a statement following the release of Giving Day’s final sums, Christina Sebastian, executive director of strategic individual giving and donor relations, celebrated the collective work of all involved in the process.

“This is truly an incredible collective accomplishment, made possible by the hard work, creativity, and hustle of individuals and teams across the University,” she wrote. “We are so excited about the impact that our donors have made on the students, faculty, and researchers who are changing the world!”

Staff writer Griffin Jones can be contacted at griffin.jones@columbiaspectator.com.